On Satanic baby-killers: From TruNews and Full Frontal

Why bother? Because this is the media bubble that shapes the “Christian world view” of millions of our neighbors — the white evangelical masses who constitute that infamous 81 percent. Those folks aren’t reading the editorial page of Christianity Today, or any of the thoughtful folks over on Patheos’ evangelical channel. They’re listening to people like Rick Wiles on “Christian” radio and “Family” radio. And so it’s important for the rest of us to understand what it is these millions of neighbors are soaking in every day.

And that, it turns out, is stuff like this: “Rick Wiles: A Satanic Child Murdering Cabal Is Leading a Coup Against President Trump.” Here is part of the edifying Christian message Wiles had for his listeners yesterday:

They’re fighting like cornered animals to prevent their pedophile network from being exposed. … It’s about the darkest, most disgusting, vilest corruption you can imagine. And if the American people ever find out the truth about their politicians and their celebrities in Hollywood and their TV idols and their favorite TV anchormen and women, and they find out all these great famous people and they find out that they’re just child molesters — not only molesters, but child murderers, sacrificing children to Satan. When they find out, they will drag their bloody carcasses down Constitution Avenue in Washington, D.C., with meat hooks! They’ll have meat hooks in their carcasses.

Your first reaction to this may be to conclude that Rick Wiles is barking looney. That’s not inaccurate. He and his “TruNews” realm are detached from reality.

You may also conclude that Wiles is an extreme and fringe figure — and he is. So you may, therefore, conclude, that Rick Wiles is a poor representative of the larger culture and theology of white evangelicalism.

And there you would be wrong.

Because Wiles here is simply saying the quiet parts loud. He’s saying directly what the rest of white evangelical culture says indirectly — what that culture believes, and what it requires its members to believe. What Wiles offers is a distillation of that belief — the central, bedrock foundation of contemporary white evangelicalism — in its starkest form. His raving may be the reductio, but he didn’t invent the ad absurdum part — that can be found, in a more palatably sophisticated form, right there on the CT editorial page.

It’s all about those Satanic baby-killers — “the darkest, most disgusting, vilest corruption you can imagine.” It’s about imagining it so hard that you almost start to believe it. So hard that you can almost convince yourself that politicians and celebrities and TV anchormen and, well, just about everyone who isn’t us are really nothing more than “child molesters — not only molesters, but child murderers, sacrificing children to Satan.” 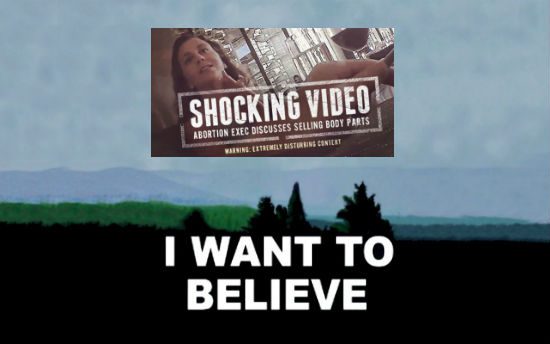 After all, it wasn’t Rick Wiles leading the way when “mainstream” white evangelicalism gasped in horror at the audacious lie that “Planned Parenthood sells baby parts.” The videos selling that lie were swallowed whole by all the Very Serious mainstream evangelicals who would never be caught linking to a site like Wiles’ TruNews. Their response was not “Hold on, what’s the evidence for these horrific claims? This sounds fishy” but simply “Hah! We knew it all along!”

And they did. They “knew” it the same way that Rick Wiles “knows” that all your “favorite TV anchormen and women” are “just child murderers, sacrificing children to Satan.” They know that their neighbors are Satanic baby-killers who kill babies for Satan.

It quiets all those nagging doubts about their doctrine of Hell (hey, if those people are all Satanic baby-killers, then they deserve it and maybe God doesn’t seem so sadistically unfair). It reassures them that they are, by contrast, Good People, even if their lives seem otherwise unpeculiar and indistinct from those of everyone else. And above all it let’s them reclaim — at least in their own minds — the moral high ground they surrendered so overwhelmingly by centering their politics in white supremacy.

This isn’t new. The mental refuge of the Satanic baby-killer libel goes back centuries. People doing and enabling horrible injustices have always attempted to convince themselves that they’re actually Good People on the right side, and they’ve almost always done so by indulging in some variation of this fantasy about Satanic baby-killers.

On NPR’s “Fresh Air” yesterday, Terry Gross interviewed Samantha Bee and her Full Frontal co-creator Jo Miller. These smart and very funny people had a lot to say about women in comedy and about doing comedy in the age of Trump. But the really interesting part of this interview had less to do with any of that directly, and more to do with Miller’s pre-comedy background studying medieval Jewish history:

GROSS: You went to Yale. You were a Fulbright scholar, then went to Cornell, where you received your Ph.D. in…

MILLER: No. I left before I got my Ph.D.

GROSS: Oh, I thought you got it. OK … but your area of specialization, as I – as far as I know, was medieval Jewish history.

Well, maybe not ha-ha funny, but it’s actually quite relevant to doing insightful comedy in America in 2017.

GROSS: Well, while we’re on the subject, when you were studying anti-Semitism in medieval times, are there some kind of tropes from then that you’re seeing now, like…

MILLER: That is not recorded. I mean, at the, you know, at Passover, there are all these — the responsa literature by the rabbis saying that it’s OK to drink white wine at Passover so that if someone’s looking in your window, they won’t think you’re drinking blood. The responsa literature describe all of these practical accommodations that people had to make to anti-Semitism and to threats. There are common themes.

One is the popular notion among people who study medieval Jewish history that there’s a sort of natural antipathy among the uneducated masses that just bubbles up from time to time because, you know, the masses, the peasants hate Jews. And that is not how it works. It’s always engineered from above. It’s engineered through propaganda campaigns by people with vested interests in using prejudice and outbursts of popular hostility. It comes from above.

… GROSS: Is there any language or any stereotypes, any myths that you’re hearing today that date back as far as medieval times or further that you’re aware of?

MILLER: Yeah. I remember when I was in grad school and the ritual murder accusations cropped up again in Bosnia and were used against Muslims. They — they’re always lying around there, these weapons lying around for you to just pick up and…

GROSS: What are those — the ritual murder accusations?

MILLER: That Jews, or in the case of Bosnia, Muslims, would kidnap Christian children and either crucify them in a re-enactment of Jesus’ crucifixion or bleed them to death to drink their blood or mix their blood into the food, which I should add isn’t true.

GROSS: You said these waves of anti-Semitism always come from above and then trickle down. So is that …

MILLER: The ones that I’ve experienced, yeah.

GROSS: … Is that what you feel like you’ve been witnessing?

MILLER: Now we have the internet. Old libels and old anti-Semitic myths, particularly Nazi ones, are pressed into service again. This is how you see the lugenpresse, the lying press bubble up again. It’s how people are radicalized online. Aside from specifically anti-Semitism, I think hostility to a vulnerable subpopulation is used by people in power for their own ends.

Not new. And not solely the province of fringe nutters like Rick Wiles.

March 8, 2017 Have fun
Recent Comments
0 | Leave a Comment
"There can be no thought of war crimes or crimes against humanity, because how can ..."
reynard61 When moral revulsion turns to moral ..."
"Palestinians Stage Historic General Strike from the River to the Sea for the First Time ..."
Professor Rudolf Laschenkohl When moral revulsion turns to moral ..."
"Yeah, that seems to be a strictly PayPal link, not one that can be used ..."
Andrew A teeth, taxes, Toyota trifecta
"Well *that* was depressing... 😩"
reynard61 Downpressor man, where you gonna run ..."
Browse Our Archives
get the latest from
slacktivist
Sign up for our newsletter
POPULAR AT PATHEOS Progressive Christian
1