Stanton Bailey, the publisher of Global Weekly and therefore Buck Williams’ boss, has some breaking news for his young senior writer:

“Steve here tells me this will be news to you, so let me just drop it on you. He is resigning immediately to accept the position of international press secretary to Nicolae Carpathia. He’s received an offer we can’t come close to, and while I don’t think it’s wise or a good fit, he does, and it’s his life. What do you think about that?”

Buck couldn’t contain himself. “I think it stinks. Steve, what are you thinking of? You’re going to move to Romania?”

“I’ll be headquartered here, Buck. At the Plaza.”

So Steve will be getting a raise by moving to the public sector — the Romanian public sector. And neither he nor Buck — nor even Bailey, who pays the bills at Global Weekly — thinks that seems unusual. 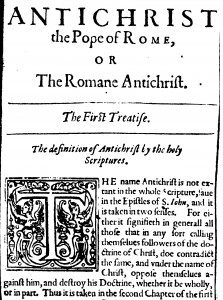 Just this week President Bush’s press secretary, Tony Snow, talked about leaving the post “for financial reasons” because his $168,000 annual salary is less than he could make as, say, the executive editor of some weekly newsmagazine. Maybe Snow will solve his financial problems by going to work for Traian Basescu (the real-world president of Romania). The idea that $168,000 a year is a hardship may sound strange to most Americans — and to most earthlings — but that’s how the world looks to wealthy executives like Tony Snow or Steve Plank. No government job could compete with the income such people make in the private sector. And if the White House can’t compete salary-wise, I’m guessing Cotroceni Palace can’t either.

I don’t think LaHaye and Jenkins intended for Steve’s lavish new salary to seem strange. I think this is how they assume the world works. People who work for the government are really important and they’re on TV a lot, so L&J figure they must make more money than anybody else.* And since they’re certain that all governments will soon, as prophesied, merge into One World Government, they figure it doesn’t matter whether Steve works for Washington or Bucharest.

Steve’s whole arrangement reeks of scandal. Steve Plank — who doesn’t speak a word of the language and has never been to the country — has apparently just become the highest-paid official in the Romanian government. He’ll be working in New York — and not even from the Romanian consulate near the United Nations, but from a hotel. You’d think the Romanian press would be all over this. The journalistic brain-trust at the Weekly, however, doesn’t see anything suspicious at all in any of this.

Steve asks Buck if Nicolae had offered him the job first and Buck tells him that actually he had recommended rude rival reporter Eric Miller for the job:

Plank recoiled and shot a glance at Bailey. “Really?”

“Buck,” Steve said, “Eric Miller’s body washed up on Staten Island last night. He fell off the ferry and drowned.”

“Well,” Bailey said summarily, “enough of that ugly business. Steve has recommended you to replace him.”

Buck was still reeling from the news about Miller, but he heard the offer. “Oh, please,” he said, “you’re not serious.”

My theory here is that Stanton Bailey is in cahoots with Carpathia, Stonagal and the rest. Notice how he says “that ugly business” rather than something more human-sounding like “that sad business.” Steve buys the half-baked cover story that Miller “fell off the ferry,” but Bailey’s choice of words shows that he knows that some “ugly business” was involved. Then, realizing that Buck looks a bit shaken and might start putting the pieces together, Bailey abruptly changes the subject, distracting Buck with the prospect of a big raise of his own.

“You wouldn’t want the job?” Bailey asked. “Shape the magazine, determine the coverage, still write the top stories yourself? Sure you would. By policy it would almost double your salary, and if that’s what it took to get you to agree, I’d guarantee it.”

Tempting offer — Buck would keep doing all the work he’s (allegedly) doing now, plus he’d take on all of Steve’s managerial responsibilities. In return for doing twice the work, Bailey tells him, his salary would “almost double.”

Oddly, Buck has no problem with that aspect of the offer, but he whines a bit about how the staff thinks he’s too young:

“But they’d never give me the benefit of the doubt. They’d be in here undermining me and complaining from day one.”

Bailey tells him not to worry about it:

“They’d complain if we brought in the pope himself.”

“I thought he was missing.”

L&J apparently believe that Pope John Paul II (the book was written in 1995) was a Real True Christian who would have been taken in the Rapture. That’s notable because, from their perspective, most Roman Catholics are not. There’s a long tradition of anti-Catholicism among the PMD prophecy enthusiasts and “the pope” is usually on their short list of suspected Antichrists.

The idea of a papal Antichrist endures because while premillennial dispensationalists insist that the book of Revelation has nothing to do with the Roman Empire of the time when it was written, they still have to account for why Rome plays such a prominent role in the Apocalypse. The idea also endures because many PMDs are the sort of American fundamentalists who really don’t like Catholics. Over the past several decades, as evangelicals and Catholics have both gotten more involved in the Republican Party, some of that animosity has given way to a somewhat uneasy alliance. The fact that they consider one another heretics has become less important to them than the fact that they both want to elect presidents who will appoint judges who will overturn Roe v. Wade. L&J’s olive branch to Catholicism here — not only is the pope not the Antichrist, he’s even a Rapture-worthy RTC — may arise from this political alliance. Or maybe they just didn’t want to have to deal with Bill Donohue. Unlike L&J’s fictional stand-in for John Paul II, however, most of the Catholics in Left Behind are among the doomed and the damned who missed the Rapture.

The chapter ends with Buck asking for 24 hours to think over the job offer. Bailey agrees and tells the others not to tell anyone about their new jobs:

“Plank, anybody else know about you?”

“We can trust her. She’ll never tell a soul. I had a three-year affair with her and never worried about anybody finding out.”

He was still laughing as they left the office.

As weirdly out of place and out of tune with the rest of the book as that bit is, the image it presents — the executive laughing a bit too loudly at his own inappropriate joke — strikes me as one of the most realistic in the book.

March 9, 2017
I don't know a dream that's not been shattered
Next Post

March 10, 2017 Make Neptune Great Again
Recent Comments
0 | Leave a Comment
Browse Our Archives
get the latest from
slacktivist
Sign up for our newsletter
POPULAR AT PATHEOS Progressive Christian
1