Feeding the hungry is a Good Thing

Feeding the hungry is a Good Thing March 16, 2017 Fred Clark

President Donald Trump’s proposed budget would slash federal funding for the Department of Housing and Urban Development by more than $6 billion. The biggest chunk of that cut would come from “eliminating the $3 billion Community Development Block Grant program, which provides money for a variety of community development and anti-poverty programs, including Meals on Wheels.”

These grants fund a lot more than just Meals on Wheels — they support dozens of other similar programs and effective efforts in every state. But Meals on Wheels is typical of the low-overhead, locally controlled, effective and efficient community-based programs that Trump wants to get rid of. So it makes a good representative of the kind of simple, decent efforts and simple, decent goals that Trump and House Speaker Paul Ryan don’t want to see as part of their Randian, Hobbesian, austerity America.

Meals on Wheels relies on HUD for less than 10 percent of its funding — most of which comes from private charity. But the HUD cuts aren’t the only source of attacks on the program in Trump’s budget, which also aims to slash the Department of Health & Human Services. That department covers more than a third of Meals on Wheels’ costs for the meals, visits and safety checks its network of volunteers provides for some 2.4 million older Americans.

That summary comes from Eliott C. McLaughlin’s CNN report, “Meals on Wheels could take funding hit in Trump budget,” which also describes the impact of the program:

According to Meals on Wheels, roughly one in six senior citizens in the country struggles with hunger, and the organization served 219.4 million meals in 2015.

About 63 percent of those meals are delivered to homes of the elderly. Those who are more ambulatory are fed at local community and senior centers.

In addition to providing food, Meals on Wheels offers much-needed human contact for home-bound senior citizens. One of the ancillary benefits of the in-person delivery is that it has decreased the rate of falls in the home, saving the nation about $34 billion a year in that respect alone, Meals on Wheels says.

That estimate of $34 billion in annual savings is based on the idea that regular visits to the homebound elderly are a kind of preventive health care. Volunteers checking in can identify problems and potential problems before they develop into health crises that could prove to be very expensive. The logic of that argument is sound, and I have no doubt that the savings from this really do amount to billions of dollars every year. But that’s also a secondary point.

The main point is this: Millions of older Americans received millions of meals. The hungry are being fed. With dignity. 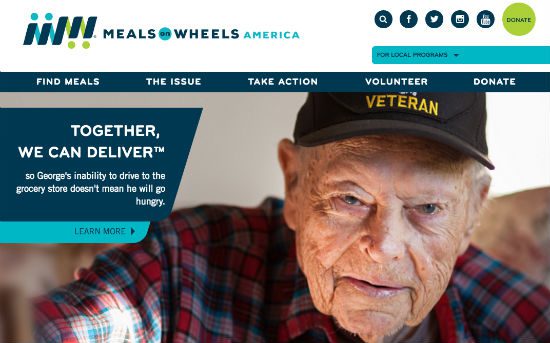 The millions helped by Meals on Wheels also includes 500,000 veterans. (That may be of interest to you if, like me, you have relatives who fetishize veterans and respond to any mention of any effort to do anything else by demanding to know why anyone would do such a thing instead of helping veterans.)

Christopher Ingraham surveys the deeper, more rigorous academic research that supports that paramount point. Study after study after study has found that Meals on Wheels works. The final result — 2.4 million hungry people being provided with healthy, tasty meals — is good in itself. And the method that produces that good result is, by any measure, an effective and efficient way of achieving that. And those studies all support Meals on Wheels’ contention that it saves the country billions of dollars in health care expenses:

Not only that, the programs offer good bang-for-your-buck: “These programs are also aligned with the federal cost-containment policy to rebalance long-term care away from nursing homes to home- and community-based services by helping older adults maintain independence and remain in their homes and communities as their health and functioning decline.”

In other words, the programs help seniors stay at home and out of costly nursing facilities. If you’re interested in keeping a lid on health-care costs, the importance of this finding can’t be overstated.

So every dollar we cut from Meals on Wheels will come back to bite us later as many dollars spent on nursing care, hospital care, Medicaid and Medicare. There are no “savings” to be had from such cuts — no “fiscal responsibility” to be claimed from them.

But, again, that’s not the main point here. The disagreement over funding for Meals on Wheels is not about fiscal responsibility, budgeting, austerity, or the most effective use of taxpayers’ money. The disagreement is about something far simpler, far more basic and fundamental.

Some people think that preserving the health, nutrition, and dignity of older Americans is an important Good Thing. And other people do not.

It comes back to the “Somebody else’s babies” problem we discussed the other day. “Drive like your kids live here,” the sign says. And to some people this makes no sense. “Why should I? My kids don’t live here.”

I’m not sure how to begin communicating with those folks. But I’m absolutely certain that people who think like that shouldn’t be allowed to serve as president or speaker of the House.