Captain Kirk, the Green Woman, and the Bible

Strange Horizons brings us Erin Horáková’s long, fascinating look at the romantic history of Captain James T. Kirk of the USS Enterprise: “Freshly Remember’d: Kirk Drift.” It’s a deep dive into the text of what Star Trek fans call TOS (the original series), but it’s fascinating and funny and well worth your time even if you’re not into the minutiae of that iconic science fiction show.

Horáková considers the reputation of the famous Captain Kirk as a roguish ladies’ man and a womanizer who seeks out new life and new civilizations with an eye to seducing sultry alien babes across the galaxy. This is something everybody knows about Kirk. It’s the well-known source of that impish smile at the corner of William Shatner’s mouth and of the twinkle in his eye. Kirk is an interstellar Don Juan, right?

Well … no. Not really, not so much, as Horáková recounts in extensive detail. That’s not what the show itself ever actually shows us. Her essay affirms the truth of Mark Twain’s famous observation that “It ain’t what you don’t know that gets you into trouble. It’s what you know for sure that just ain’t so.”

Kirk’s womanizing turns out to be one of those things we all know for sure despite the fact that it just ain’t so. (Another one of those things, alas, is the idea that Mark Twain ever said that famous quote, which he didn’t.) Kirk is basically married to his career as a Starfleet officer, someone whose romantic history is consistently portrayed as faithfully monogamous and marked by mutual respect, but always secondary to his duty as captain of a spaceship.

That’s the text — even though it’s pretty much the opposite of the popular impression widely held despite the text. That’s interesting.

Consider for example what may be the most famous example of James T. Kirk’s Harknessian appetite for strange new strange: the green woman. Most of us remember Kirk’s romance with the green woman — we’re reminded of it every time we see the * credits of TOS, as she appears on the screen before every episode. 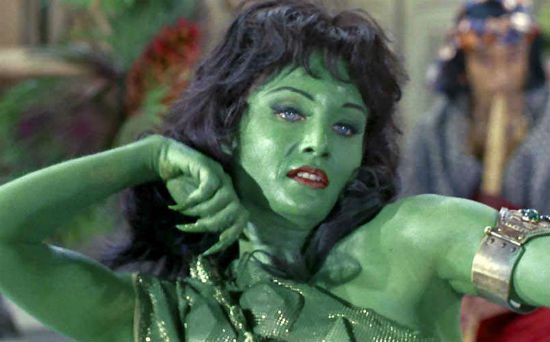 She must have been one of Kirk’s romantic conquests, right? If you had asked me that, I’d have told you, yes, of course, everyone knows that. J.J. Abrams even included a funny reference to it in the 2009 movie reboot.

But as Horáková points out, that’s wrong. James T. Kirk never even met that green woman. She appeared in a hallucinatory vision directed toward his predecessor:

“You’re thinking of Pike,” I say. “The captain in the unaired pilot. Some of that footage got reused for a later story, which made Pike into a previous captain of the Enterprise. And it never actually happened — it was a hallucination sequence designed by aliens who didn’t know what they were doing in order to tempt Pike. He rejected it.”

Wait, that can’t be … but it is. That’s what actually happened on the show, but it’s not what we remember happening. We remember it wrong because we see that green woman in the opening credits through the filter of our idea of James T. Kirk, Womanizer and that filter reshapes what we see, reinforcing the mistake.

Horáková calls this dismembered remembering “Kirk Drift,” and dives deep into the sources, mechanics, and repercussions of this pernicious, pervasive form of self-deception. It’s a long, twisting exploration of this phenomenon, full of wild tangents and asides that later turn out to be connections back to this central idea. I’m sure it will be read by Star Trek fans, but it also should be read by history students.

And by seminarians. Because, of course, this same dynamic of “Kirk Drift” is also at work whenever we read, and mis-read, the Bible. That text, perhaps more than any other, is colored by fans who read it full of certainty about what we imagine we know for sure, but just ain’t so.

Maybe the biggest example of this for me, personally, had to do with the doctrine of Hell. I was sure that must be in there, in the text. It had to be, right? I mean, this is something I’d learned and absorbed for my entire life growing up in the church. Everybody knows it’s there in the Bible. Everybody knows that’s where it comes from, right?

Except it doesn’t. The word is in there, but the doctrine we’ve constructed out of and around that word just can’t be found in the text itself. That doctrine is something we carry to the text and then imagine we find there whenever we encounter the word — just the same way that our preconceptions and misconceptions about Captain Kirk get mistakenly reinforced every time we see that image of the green woman in the opening credits.

We are able to list many other such examples of how Kirk Drift misshapes what we think we know about any text. And, more importantly, we are not able to list — or even to see — even more such examples of other things. We carry on, so confident in our knowledge and assumed certainty that we may never come to see otherwise.

This is unsettling, but it’s also thoroughly, inevitably human. It’s who we are and how we work.

One of the sneakier bits I enjoyed in Horáková’s essay is the devastating character sketch she presents at the beginning, introducing us to an almost archetypal mansplaining blowhard as he holds court at a dinner party, pontificating about James T. Kirk and the green woman. This guy is arrogant, condescending, certain, and wrong. Horáková exposes him as ridiculous and embarrassing, and we enjoy his deflating comeuppance. But while we can all strive to avoid his preening attitude — eschewing the arrogance and the emotional need to portray ourselves as authoritative know-it-alls — we cannot escape his predicament. Apart from his buffoonery, his core problem is that he doesn’t have access to perfect knowledge or to perfect perception.

And neither do we. Not even when the text is right there before us.

The apostle Paul (sometimes) recognized this problem. Epistemological certainty, he realized, was not something that can ever be available to us here in this world. We see through a glass, darkly. So since perfect knowledge is not an option, he argued, we should strive instead for perfect love.

That’s good advice. It can help us to avoid becoming ridiculous know-it-alls that nobody wants to sit near at dinner parties. And that is, as Paul says, “still more excellent” than chasing some impossible dream of perfect knowledge or perfect understanding of any text.

But this doesn’t mean we need to abandon the pursuit of better knowledge and better understanding. Knowing true things is better than thinking we know untrue things. And while we may all be finite and fallible, we remain capable of learning better — of changing our minds (a common phrase that seems so familiar we sometimes forget how astonishing that really is).

So next I’d like to talk a bit about one way that sometimes happens and whether, perhaps, that is something that can be made to happen.

* It’s in the closing credits. Misremembering that seems appropriate, somehow.