Brio is back. Focus on the Family is resurrecting its magazine targeting the teenage girls of white evangelicalism, because if anyone has his finger on the pulse of what’s hip and cool for teenagers, it’s long-time religious-right patriarch, spanking enthusiast, and proven false prophet James Dobson.

There’s some appeal to that, since most teenagers most of the time are not having sex, and if you’re part of that majority, it can be comforting to be reminded that this doesn’t make you weird or inferior. But alas, the helpful message of “just because you’re not having sex or not dating anyone doesn’t make you less of a person” wasn’t the main message there. Brio was preaching purity culture, so the main message was actually “if you are having sex and/or dating, you’re ‘damaged goods,’ God doesn’t love you. and nobody else ever will either (unless you’re a boy, in which case, it’s just a thing that happens and no one will ever blame or shame you because obviously it was the girl’s fault because she was probably wearing yoga pants or a two-piece bathing suit).”

Sarahbeth Caplin recalls absorbing the purity-culture message of shaming from Brio, and isn’t thrilled to see its return. She also recalls stuff like this, from the magazine’s regular advice column:

I remember reading an advice column by Susie Shellenberger (“Ask Susie”) that delivered a particularly cold response to someone who wrote to ask if her non-Christian friends really went to hell. I remember Shellenberger’s response to this day: “I don’t understand what’s so hard to accept about this! If it’s in the Bible, then it’s true: end of story.” Pretty harsh to hear as an adult with doubts, let alone as a vulnerable 16-year-old.

Not just harsh, but horrible theology — horrible in substance and in execution. Maybe I’ll pitch a story to Brio’s editors about reviving Sotah — mandatory trial-by-ordeal abortions for women accused of infidelity. After all, “If it’s in the Bible, then it’s true: end of story.”

(Dear Susie: My pastor says that carpet lint from our church sanctuary can substitute for dust from the floor of the tabernacle when concocting the curse of the bitter water to produce a miscarriage as commanded by God. Is that substitution acceptable? …)

Brio’s emphatic emphasis on abstinence is harmful even beyond the shameful shame-inducing aspects of purity culture. It makes this the paramount duty and purpose of Christianity: abstention. What do Christians do?

Christians abstain. From sex. From the world. From everything. Christianity thus becomes an empty space, a vacuum — and people, naturally, abhor a vacuum.

Elevating abstention doesn’t strengthen the faith of young people, it undermines it. Fourscore and ten years is a long time to avoid doing anything, and too long a time to avoid doing everything. Most people, eventually, want to do something, and need to do something. They’ll want to connect, to build, to create, to enjoy — and if the faith they’ve been taught won’t tolerate that, they’ll wind up leaving that faith behind.

That’s a Good Thing, actually, because a faith that says nothing but “abstain” and “wait” and “do not do” should be left behind. Consider the (in)famous slogan of the abstinence ideology championed by the likes of Brio: “True Love Waits.”* What does love do? It waits. It just sits there, waiting. Such love is idle, inert, inactive, impotent. Hardly worth waiting for. 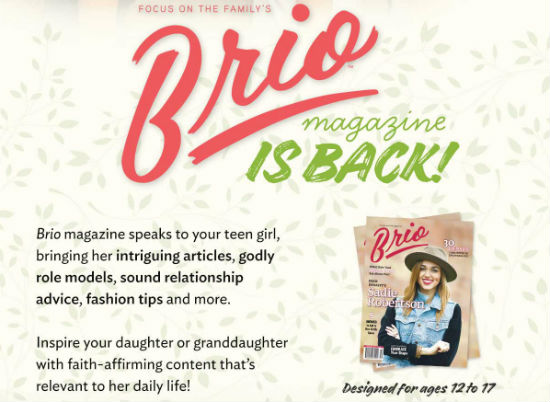 Like most artifacts of the white evangelical subculture, Brio tends to lag several years behind the broader popular culture it attempts to imitate and domesticate. That’s why those old Brio issues from the 1990s seem like a time-capsule of pop culture from the ’80s. The cover of the first issue of the 2017 version of the magazine features reality-television personality Sadie Robertson. You probably still remember Duck Dynasty. That show enjoyed a brief moment of cultural currency only a few years ago, so Focus seems to have shortened it’s usual lag-time. It’s now just a few short years behind the zeitgeist it’s chasing.

A few years is still a lifetime for teenagers, of course, since a generation in high school is just four years. But that won’t be a problem for Brio, since its actual audience isn’t so much teenage Christian girls as it is their white evangelical parents. For that audience, only a few years of cultural lag is practically cutting-edge.

Brio is weirdly explicit about striving to appeal to parents rather than to the teenagers themselves. Just look at the copy in that promo pasted above. The “you” and “your” there doesn’t refer to the girls for whom this magazine is purportedly published, but to their parents.

Or look at the page promoting Brio on Focus’s own website. It reads: “As a parent, grandparent or mentor of a teen girl, you know culture bombards her with messages about her body, fashion, relationships, values and faith. But you’ve taught her biblical truths about loving God, valuing others, the importance of modesty and how she is wonderfully made. Continue your influence in her life by providing Brio magazine on a regular basis!”

Heck, just look at the URL for that page: www.focusonthefamily.com slash parenting slash promos slash brio-parents. It’s conceived as a magazine under the category of “parenting,” an aid for and tool to be employed by parents. I suppose that’s why Brio is returning as a glossy print magazine rather than as a Snapchat feature (or whatever it is that kids today are using that I, as a 40-something parent, wouldn’t even know about).

I don’t think she was ever featured in the pages of Brio, but somehow remembering the original run of that magazine makes me think of Katy Hudson. She was a pastor’s kid and a talented singer-songwriter who won praise from evangelical parents for endorsing the True Love Waits pledge. Back in 2001, when Christianity Today was praising the 16-year-old’s self-titled debut album, she seemed like everything a Brio Girl should be.

And I suspect her trajectory is probably typical for many of Brio’s original readers — even if most of them won’t grow up to perform at halftime of the Super Bowl.

(P.S.: I am disappointed in the Internet for not providing me with a picture of the rumored old Brio cover featuring Billy Ray Cyrus and his wholesome, abstinence-pledging, daughter Miley. If you can supply a picture confirming the existence of that, I would be grateful. Just be sure to turn “safe search” on before Googling.)