Trump and Erdogan and ‘a certain kind of consent’

“It’s too late now,” Turkish President Recep Tayyip Erdogan said in April after ramming through a national referendum that “will greatly expand the powers of his office.”

Many citizens of Turkey have questioned the legitimacy of the results of that referendum vote, which took place during a period in which the increasingly authoritarian Erdogan was busily arresting journalists, professors, and opposition politicians. But the result — a narrow, 51-percent alleged majority — stands, and so the country’s constitution will be amended to give more power, with fewer checks and balances, to its president.

That president is here in the U.S. today, visiting the White House to meet with President Donald Trump, who was among the very few world leaders who called to congratulate Erdogan after his referendum “victory.” Most leaders of most constitutional democracies did not call to offer congratulations because they did not see increasing authoritarianism in Turkey as a Good Thing. But Trump did.

And Trump’s enthusiastic welcome for Erdogan today is barely making any news at all because it’s getting drowned out by yesterday’s blockbuster news that President Trump himself leaked highly classified intelligence to high-ranking Russian officials in the Oval Office.

The story was first reported by The Washington Post’s Greg Miller and Greg Jaffe: “Trump revealed highly classified information to Russian foreign minister and ambassador.” It was subsequently confirmed, independently, by The New York Times, CNN, The Wall Street Journal, Newsweek, and Buzzfeed. (Lawfare has a good summary of the gravity and repercussions of what it calls a “bombshell” revelation.)

Trump’s defenders rushed to denounce this story as “fake news,” but administration officials offered only non-denial denials. And then, this morning, Trump himself took to Twitter to announce that yep, he did it. On purpose. (It was the same pattern as with last week’s firing of FBI chief Jim Comey. First Trump sends his aides out to deny that the firing had anything to do with the FBI’s investigation of Trump’s ties to Russian oligarchs and mobsters, and then — after they’ve all spent a day going on record saying that — he throws those same aides under the bus by coming forward himself to say that was exactly why he did it.) 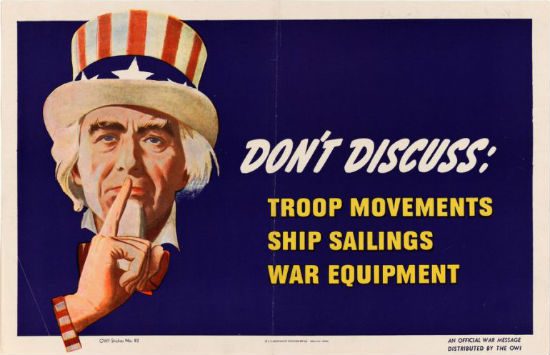 This is unprecedented. It’s a huge story and a huge mess. If anyone other than the president had leaked this information in this way, they would be facing criminal charges. America’s ability to receive and respond to intelligence about terrorist threats was just dealt a major blow by the president himself. It’s all astonishing.

Coming on top of last week’s revelations about Trump’s deliberate attempt to quash the FBI’s criminal/counter-intelligence investigation into his campaign, it seems like this should be consequential. After a weekend in which people like James Fallows, Carl Bernstein and John Dean were lining up to explain how Trump’s obstruction of Comey’s investigation is worse than Watergate, we get this.

It’s overwhelming. And that’s the dangerous thing. We’re at risk of being overwhelmed. We freeze up, paralyzed, waiting for the next shoe to drop, even as it’s raining shoes. We can be so transfixed by the spectacle of Trump’s implosion that we become spectators. We watch what Republican Sen. Bob Corker yesterday called Trump’s “downward spiral” and assume it must mean that he is therefore swirling down the drain and will soon be out of sight, out of the way, out of office.

But that’s not what’s happening. What’s happening, rather, is that Trump is actively consolidating his power. He’s appointing judges — the younger the better — to every corner of the federal judiciary. He’s empowering white-nationalist vote-suppression expert Kris Kobach to take his disenfranchisement scheme nationwide. He’s got Jefferson Beauregard Sessions III busily reigniting the “War on Drugs” as a means of felonizing anyone who might vote against him.

Trump is increasingly Nixonian, but he’s not following the same path to disgrace and resignation that Richard Nixon followed. He’s following the path of disgrace and lawless power-grabbing that Erdogan has been mapping out in Turkey.

We can’t expect to just sit back and watch, assuming after every new astonishing revelation that, surely, now someone is at last going to do something about this trainwreck of a petty tyrant. We have to be that someone.

It can be stopped, but it won’t stop on it’s own.

We have a century of wisdom and very smart people who confronted situations like our own — but usually more demanding — and that wisdom can be condensed.

… The thing that matters the most is to realize that in moments like this your actions really do matter. It is ironic but in an authoritarian regime-change situation, the individual matters more than [in] a democracy. In an authoritarian regime change, at the beginning the individual has a special kind of power because the authoritarian regime depends on a certain kind of consent. Which means that if you are conscious of the moment that you are in, you can find the ways not to express your consent and you can also find the little ways to be a barrier. If enough people do that, it really can make a difference — but again only at the beginning.

… Be as courageous as you can. Do you actually care enough about freedom that you would take risks? Do individuals actually care about freedom? Think that through. I think if enough of us take the little risks at the beginning, which aren’t really that significant, this will prevent us from having to take bigger risks down the line.

We are still at a stage where protest is not illegal. We’re still at a stage where protest is not lethal. Those are the two big thresholds. We are still on the good side of both of those thresholds and so now is the time you want to pack in as much as you can because you could actually divert things. Once you get into a world where protest is illegal, then the things that I recommend like corporeal politics, getting out on the streets — they have to happen but they are much riskier. It’s a much different kind of decision.

You have to accept there is a time frame. Nobody can be sure how long this particular regime change with Trump will take, but there is a clock, and the clock really is ticking. It’s three years on the outside, but in more likelihood something like a year. In January 2018 we will probably have a pretty good idea which way this thing is going. It’s going to depend more on us than on them in the meantime. Once you get past a certain threshold, it starts to depend more on them than on us, and then things are much, much worse. It makes me sad to think how Americans would behave at that point.

… Don’t obey in advance because you have to start by orienting yourself against the general drift of things. If you can manage that, then the other lessons — such as supporting existing political and social institutions, supporting the truth and so on — those things will then come relatively easily if you can follow the first one, which is to get out of the drift, to recognize that this is the moment where you have to not behave as you did in October 2016. You have to set your own habits now.

May 15, 2017
Picking up passengers from coast to coast
Next Post