Speaking truth of the dead

“Never speak ill of the dead,” we are told. Those repeating this ancient advice do so as though they were reciting a biblical commandment or some kind of self-evident moral precept. But that’s not what this is.

It is, rather, a snippet of opinion about etiquette. Speaking ill of the dead wasn’t being condemned as immoral, but merely as sometimes a form of poor sportsmanship. It was cautioned against as a form of running up the score. The “rule” of “Never speak ill of the dead” has no more ethical or moral import than, say, the “unwritten rule” that you shouldn’t steal a base if your team is already up by five in the eighth inning. The idea wasn’t that speaking ill of the dead was wrong, but that it was potentially crass.*

Over time, this bit of Miss Manners propriety made its way from Greek into Latin (De mortuis nil nisi bonum) and then on into folklore, no longer as a matter of etiquette, but as an expression of superstition. Speaking ill of the dead became less a matter of bad manners than a matter of bad luck.

That superstitious notion endures among the sophisticated serious people of the 21st Century who love to cite this maxim, frowning extravagantly. There’s an implied appeal in it to the wheel of fortune, a warning that those who speak ill of the dead are risking incurring bad luck or bad karma. If you speak ill of the dead, they warn, then others may speak ill of you when you die.

This is nonsense. More specifically, it’s the kind of nonsense one arrives at when one separates the quality of words from their accuracy, and thus when one starts to believe that tone is more important than meaning, and therefore that pleasant falsehoods are preferable to unpleasant truths. 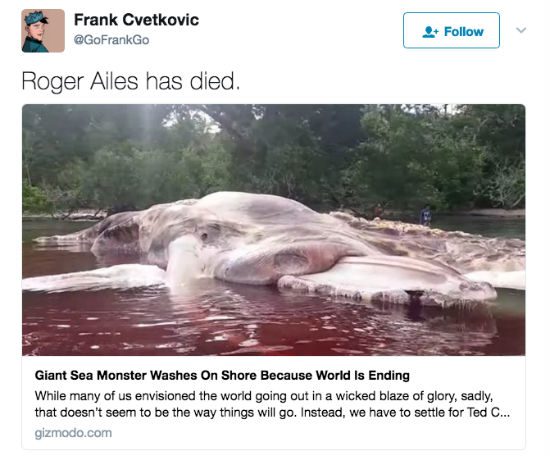 This idea misses and mangles the wisdom of the insight often attributed to Yogi Berra: “Always go to other people’s funerals, otherwise they won’t come to yours.” That’s a whimsical reminder of the standard of reciprocity, an appeal to what Jesus summed up as “the measure you give will be the measure you get.” That follows right after the more popular bit in which Jesus warns, “Do not judge.” And it precedes his next logical point, which is a warning against hypocrisy. He tells us to apply the same measure — the same standards and judgments — to ourselves as we do to others. Glass houses and all that.

But somehow we’ve managed to twist Jesus’ argument into something else — into an excuse, or even a mandate, for dishonest mutual flattery. The measure I give will be the measure I get? Very well then, I’ll slap your back and you can slap mine. “You’re awesome! You’re exemplary! And when you die I will have nothing but effusive praise for your boundless virtues!” “Back atcha!”

This sham only reinforces the underlying truth of what Jesus was saying. If you make nil nisi bonum your practice, regardless of the truth, then you will pour out disingenuous, hollow, transparent flattery denying the reality and the existence of other lives as they were lived. And the false measure you give will be the false measure you get. Others will deny the reality and the existence of your life as well, erasing you beneath a flood of similarly disingenuous, hollow, transparent flattery.

Here are some other words Jesus said just before that bit about “Do not judge”: “Let your word be ‘Yes, Yes’ or ‘No, No’; anything more than this comes from the evil one.” Say what needs to be said as truthfully and accurately as possible. That’s not nil nisi bonum, but rather, as the prophet Isaiah put it: “Woe to you who call evil good and good evil, who put darkness for light and light for darkness, who put bitter for sweet and sweet for bitter!”

So, again, I’m suspicious of the notion that the recently deceased should be spoken of only in terms of “nothing but good” and sweetness and light. Let your yes be yes; call bitter bitter and call sweetness sweet. De mortuis nil nisi verum.

An odd side-note to this whole phenomenon of tut-tutting those with the temerity to speak truth of the dead involves the term “grave-dancing.” This phrase and its variants seem intended to be heard as pejorative — as something distasteful and bad. That’s odd because “grave-dancing” doesn’t sound like a bad thing. It sounds like something wonderful and desirable.

Fretful condemnations of “grave-dancing” are uttered with the same implicit and vaguely superstitious warning against potential reciprocity: Don’t dance on others graves or others will dance on yours.

To regard this as a bad thing, it seems, one must assume that these people will be dancing on your grave because they will be celebrating your death — celebrating that your life has, at last, come to an end. But dancing is joyous — an embodiment of the kind of joy that mere schadenfreude cannot provide. If there is to be dancing in graveyards, it will be because people are celebrating the lives of the deceased — because remembering those lives, and the good of those lives, will turn mourning into dancing.

I very much hope that my life will be worth celebrating, and that others might, perhaps, be inspired to dance on my grave.

I also very much hope that others will speak well of me when I die. But it’s no good hoping for that unless I also hope — and attempt to make real — that those others who speak well of me will be speaking the truth, sincerely and accurately, and not merely showering me with sweet flattery because of some ancient notion of etiquette or decorum or superstition. We cannot be truly loved unless we are truly known.

Oh, and f–k Roger Ailes. The man was a racist liar and a sexual predator who immiserated a generation by feeding them resentments that stole them from their children. His death makes the world a better place. I’m not dancing on his grave, I’m dancing away from it.

* There’s a scene in Buffy where Giles warns the gang not to taunt the (teensy weensy) fear monster: “Why, can he hurt me?” Xander asks. “No,” Giles says, “It’s just … tacky.” The tackiness is a consequence of the monster’s inability to do any harm — of the “actual size” Gachnar’s suddenly recognized impotence. I think this is related to why it’s regarded as unseemly or unsporting to speak ill of the dead. Death renders them powerless, and therefore any further condemnation of them becomes a kind of punching down, an exercise of power against the newly powerless.

But I’m not sure that’s an entirely accurate estimation of the power dynamic here. The dead, like the past, are not always wholly done with us. The power they abused and misused in life — the damage, the harm they’ve set in motion, the misery they’ve caused, the actions they’ve inspired in others who survive — continues, and continuing to oppose that enduring power isn’t punching down. It’s necessary. It is a form of self-defense, of healing, of rebuilding and replanting and reconstruction.