The Creation of adam

Harmonia Rosales, an artist based in Chicago, has revisited Michelangelo’s Creation of Adam. 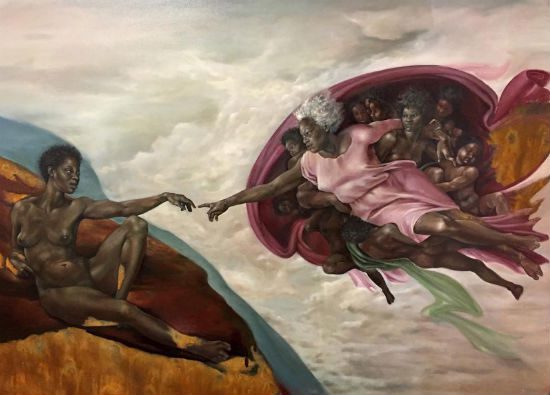 Part of how we know it’s good theology is that it causes some white Christians to bristle defensively. “God is not a black woman!” they cry, getting as close as they may ever get to to at last acknowledging the foundation of their belief, which is that God is a white man. A painting that prompts and exposes such reactions is doing something very good and constructive, theology-wise.

Rosales’ painting is seen as making a theological (and political) statement in a way that Michelangelo’s original is not, even though it absolutely is.

We are beautiful creatures made in the image of God, Michelangelo showed us. And that’s an excellent thing. The trouble arises when we start to unpack that undetermined first-person pronoun. Who is “we”? Which we?

I like that Rosales retains the same name for her painting as in the original: The Creation of Adam. That name literally means “humankind,” i.e., the entire human species, i.e., everybody. That’s what she and Michelangelo are both portraying. We, adam, are beautiful creatures made in the image of God.

… And here is where I tripped down a rabbit hole.

I was pondering what it means to understand Michelangelo’s contextual theology as contextual theology, and the difference between that and ascribing to it a normative claim for its particularity, and the next thing you know I’m squinting at high-res enlargements of his original painting trying to discern whether or not his Adam is circumcised and the multiple possible interpretations of that, either way. (I can’t tell by squinting — does anyone know?)

This is, after all, the same artist whose beautiful, world-famous statue of David is, well, looking a bit goy down there. David is well-chiseled, but uncut. This has been the subject of much discussion, both among art historians and theologians, and even in places like the Journal of the Royal Society of Medicine.

The author there, Roland Strauss, argues that this was simply artistic convention in Michelangelo’s time: “Although circumcision was widely practiced, in renaissance art it was customary not to admit to the effects of the operation. This is most obvious in the numerous contemporary representations of the Christ Child, who is never shown as circumcised.” He portrays this as nothing more significant than the way I just edited “practised” to “practiced” in quoting him, but I think it only heightens the importance of the question. Why was Jesus never “shown as circumcised” in “the numerous contemporary representations of the Christ Child”? Was this a matter of innocent ignorance (paint what you know)? Or is it — as seems, alas, more likely — an expression of the sinful anti-Semitism that was widespread in the Christianity of Michelangelo’s day (and of ours)?

That seems a stretch, though.

Here, by the way, is where I found myself diverted into a second rabbit hole — initialing attempting here to segue into a discussion of how Paul’s argument there in Galatians was determined by the power dynamic between Jewish and Gentile Christians in that community, and how in his letter to Rome, where that power dynamic went the other way, so did his argument, and how that same way of thinking shapes my response to both versions of The Creation of Adam, leading me to conclude that Rosales’ is, here and now, the one we need far more to see and to ponder.

But then I realized it’s quarter to eight and I have to leave for work in an hour. So.