Reed was once the baby-faced rising star of the religious right — the brains behind Pat Robertson’s once-mighty Christian Coalition back in the Gingrich-era ’90s, when the “Contract [on] America” blazed the trail for the Tea Party and the unprecedented procedural radicalism of the Republican-controlled Congress of the Obama years. Back then, Reed — who looked like a cross between Dennis the Menace and Alex Krycek — was seen as a pious king-maker and one of the more powerful people in Washington. “The Right Hand of God,” Time magazine said on the cover of a 1995 issue.

The intervening years haven’t been as kind to Ralph Reed. 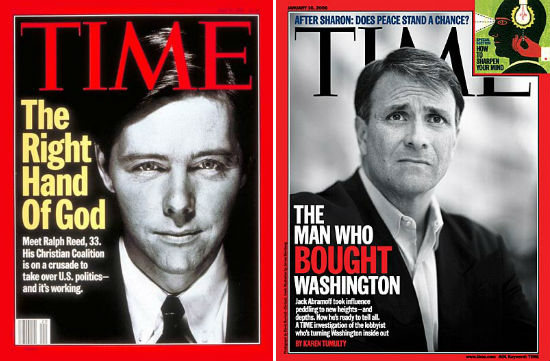 Alex Gibney, director of the 2010 documentary Casino Jack and the United States of Money, summarized Reed’s role in Abramoff’s operation for The Atlantic:

To recap, Ralph Reed worked for team Abramoff by mobilizing Christians opposed to gambling to shutter casinos. The only hitch: Reed was usually paid by other casinos who had a financial interest in eliminating their competitors. Therefore, Abramoff needed to find a way to make Reed comfortable, and to protect him against critics and the likely fury of his own Christian followers — who might have been upset if they had discovered that Reed was being paid by gamblers to do their bidding. The solution: Abramoff laundered the Indian casino payoffs to Reed by routing them through other organizations, including Grover Norquist’s Americans for Tax Reform and a phony “think tank” in Rehoboth Beach, [Delaware], run by a life guard and a yoga instructor who were friends of Abramoff’s pal, Mike Scanlon.

Let’s be clear: there was probably nothing illegal about what Reed did. But, he was engaged in a kind of spiritual fraud: telling his supporters that he was opposed to gambling when, in fact, gambling was making him rich.

There were other layers to the scam. Abramoff would get hired to lobby on behalf of Indian tribes seeking casino rights, then he’d get his boy Reed to rile up the local white Christians in opposition, allowing him to go back to the tribes to explain that he’d need more of their money to counter the supposedly unforeseen opposition that he himself was orchestrating. That sounds sleazy enough on its face, but it was carried out with an enthusiastic contempt that makes it even sleazier.

A 2004 report from Indian Country Today offers a taste of the predatory disdain Abramoff and Reed shared for their Indian and white evangelical clients alike:

Washington lobbyist Jack Abramoff and public relations consultant Michael Scanlon … by all accounts have deceived, manipulated and wreaked havoc on half a dozen — sometimes willing — tribes. The brazen duo paid millions to Ralph Reed, boy-blue of the right wing Christian set, to help them shut down the Tigua Tribe of Texas’ Speaking Rock casino; they then turned around to suction off millions of dollars from the same Tigua Indian tribe, presuming to help them reopen their casino — all the while disdaining and insulting their duped clients.

Reed mobilized calls from the public to the District Attorney’s office to agitate for shutting down the Indian casino. Reported Reed to Abramoff: “We did get our pastors riled up last week, calling his office. Maybe that helped but who knows.” Abramoff’s response makes his attitude clear: “Great. Thanks Ralph. We should continue to pile on until the place is shuttered.”

The campaign against the Tigua casino succeeded and the long-impoverished Tigua’s main source of income, a $60 million-a-year enterprise, was shut down in February 2002. The shutdown put some 450 people out of work. Amazingly, only 10 days later, Abramoff wrote to the tribe offering his services to correct the “gross indignity perpetuated by the Texas state authorities.” His Republican connections in the U.S. Senate could rectify the problem, he assured a Tigua representative. This from the same man who had just worked to destroy their livelihoods.

Here’s Susan Schmitt’s 2004 Washington Post report on this scam against the Tigua and against gullible white evangelicals in Texas:

Washington lobbyist Jack Abramoff and public relations consultant Michael Scanlon quietly worked with conservative religious activist Ralph Reed to help the state of Texas shut down an Indian tribe’s casino in 2002, then the two quickly persuaded the tribe to pay $4.2 million to try to get Congress to reopen it.

Dozens of e-mails written by the three men and obtained by The Washington Post show how they built public support for then-Texas Attorney General John Cornyn’s effort get the courts to close the Tigua tribe’s Speaking Rock Casino in El Paso in late 2001 and early 2002. The e-mails also reveal what appears to be an effort on the part of Abramoff and Scanlon to then exploit the financial crisis they were helping to create for the tribe by securing both the multimillion-dollar fee and $300,000 in federal political contributions, which the tribe paid.

What he did not reveal was that he and Scanlon had been paying Reed, an avowed foe of gambling, to encourage public support for Cornyn’s effort to close two Indian casinos in Texas. Abramoff, one of Washington’s powerhouse Republican lobbyists until his work came under scrutiny by law enforcement agencies this year, has long been close to Reed, former executive director of the Christian Coalition and now southern regional chairman of President Bush’s reelection campaign. Both have political ties to House Majority Leader Tom DeLay (R-Tex.), as does Scanlon, who had served as his spokesman.

What he did not reveal was that he and Scanlon had been paying Reed, an avowed foe of gambling, to encourage public support for Cornyn’s effort to close two Indian casinos in Texas. …

In the end, Abramoff and Scanlon failed to get the casino reopened.

E-mails concerning the Tiguas from Abramoff’s computer at his former law firm, Greenberg Traurig, and obtained by The Post, show Abramoff and Scanlon preparing to sell themselves to the tribe as Cornyn’s office won federal court rulings against Speaking Rock Casino.

A week later, a Texas consultant employed by the tribe thanked Abramoff for his visit and said he would push his proposal. Abramoff forwarded the e-mail to Scanlon with the message: “This guy NEEDS us to save his ass!!”

Days later, on Feb. 19, Scanlon sent Abramoff an El Paso Times news story headlined “450 casino employees officially terminated” with the message: “This is on the front page of todays paper while they will be voting on our plan!”

“Is life great or what!!!” responded Abramoff.

… The e-mails reveal how closely Abramoff and Scanlon worked in tandem with Reed, whose longtime opposition to casino gambling and his connections to churches made him a powerful ally in Texas’s effort to shut down the Tigua casino that Cornyn said was operating illegally. Reed was paid $4.2 million by Abramoff and Scanlon for his work opposing several tribal casinos in southern states from 2001 to 2003, government sources said.

… In an e-mail to Reed on Feb. 11, 2002, Abramoff did not mention he had been in contact with the Tiguas. He wrote: “I wish those moronic Tiguas were smarter in their political contributions. I’d love us to get our mitts on that moolah!! Oh well, stupid folks get wiped out.”

“Those who mock the poor insult their maker,” Proverbs says, “those who are glad at calamity will not go unpunished.” A parallel version of that same Proverb says, “Those who oppress the poor insult their maker.” Take your pick — Ralph Reed did both, siphoning millions of dollars for himself by helping Abramoff oppress the poor, and heaping mockery on his victims all the while.

But that was more than 10 years ago. Now Reed is back for a third act, returning to his roots getting pastors riled up with his refurbished “Faith and Freedom Coalition.” I’d guess Reed learned enough from Abramoff about multiplying his revenue streams that he’s not simply repeating the basic direct-mail-and-conference-fees grift of the old Christian Coalition. That’s the core of his business model, and the public piece of it, but I’d be surprised if he isn’t supplementing that with some of the double- and triple-dealing schemes he learned from his former master.

In any case, Ralph Reed is back in his element, sanctimoniously sucking up to power by hosting Donald Trump — another long-disgraced oppressor and mocker of the poor who, like Reed, has made a fortune from failing casinos.

Neither of these men has ever bothered to hide their contempt for the white evangelical pastors and congregants they’ve conscripted to further their own agendas. It’s odd that this doesn’t seem to diminish their appeal with that crowd.