‘Make the phones ring off the hook — with REAL calls’

Ben Wikler of MoveOn wrote a helpful Twitter thread recently on why it’s a really bad idea to call multiple members of Congress pretending to be a constituent of theirs.

Wikler is a pro who knows his stuff. This is a guy who spends most of his time urging others to call and write to their representatives and senators about very important matters that have a huge impact on the real lives of real people. He understands the stakes here for citizens and families and communities.

And Wikler understands that those stakes are particularly high when it comes to whatever it is that Republican senators are now doing, in secret, to ram through some version of the horrifying “American Health Care Act” that was passed by the House. That bill, in every form the public has been allowed to see, would gut Medicaid — slashing its funding by nearly $1 trillion over the next decade. It would remove the protections that enable those with “pre-existing” health conditions to afford health insurance — allowing almost anything to be regarded as a pre-existing condition that would price them out of the insurance market. It gets rid of regulations requiring health insurance to actually pay for health care — allowing insurers to exempt hospitalization, doctors visits, maternity care, prescription costs, and just about anything else that we actually need insurance for. And it would likely mean skyrocketing premiums that most families simply cannot afford. 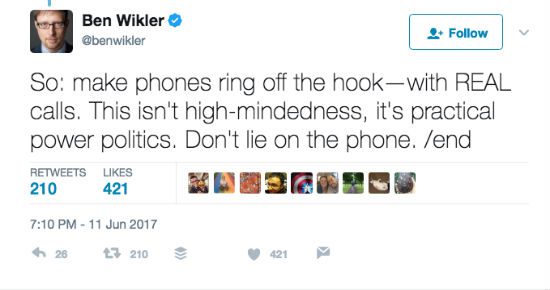 If this “mean” bill — that’s how Donald Trump described it — becomes law, at least 23 million Americans are expected to lose their access to health care. And almost everyone else — except for a few young, single, healthy and wealthy folks — will wind up spending a lot more money for insurance that covers a lot less actual care. Insurers will again be allowed to impose lifetime limits and annual limits on health coverage, but this will be worse than in the pre-ACA days because those who are thereby impoverished by chronic illness, cancer, or childhood conditions will no longer be able to rely on Medicaid as a safety net.

People will die. That’s not hyperbole. It’s not rhetorical. It is the absolutely predictable, inevitable consequence of this bill becoming law.

That’s important. That’s Very Very Bad. And that’s why Ben Wikler has been sounding the alarm and urgently calling for everyone who has a physical body that is, has been, or may ever be, less than perfectly healthy to pick up the phone and contact their representatives and senators to express their opposition to this horrible, harmful, indefensible legislation.

But it’s also why Wikler is, at the same time, urging everyone to be honest when making those phone calls.

Given the literally life-and-death stakes of this legislation, Wikler realizes, “You might be tempted to call multiple Republican Senate offices pretending to be a constituent. Here’s why I STRONGLY urge you not to.” He continues:

Phone calls are taken far more seriously specifically because each one involves an actual human being on the other end of the line. The unfakeable effort required to make phone calls & the ability to check area & zip codes makes them reliable enough to use as signals. If constituents care a lot about something, Senators get a lot of calls about it. If they don’t, they don’t. Real way to track energy. But if Senators come to think a lot of calls they’re getting aren’t really from constituents, they could tune out the signal entirely.

If calls are ignored, constituents — all of us — lose a significant source of our small-d democratic power. Let’s not poison this well. Call your senators daily. Recruit others to call. But don’t call and lie about where you’re from.

So: make phones ring off the hook — with REAL calls. This isn’t high-mindedness, it’s practical power politics. Don’t lie on the phone.