Robert Jeffress and ‘The War Prayer’

In early 2003, “It was a time of great and exalting excitement. The country was up in arms, the war was on, in every breast burned the holy fire of patriotism; the drums were beating, the bands playing, the toy pistols popping, the bunched firecrackers hissing and spluttering; on every hand and far down the receding and fading spread of roofs and balconies a fluttering wilderness of flags flashed in the sun …”

That’s from the opening of Mark Twain’s fierce parable, “The War Prayer.” Twain wrote that in 1905 in response to the pious, patriotic fervor that led to the Spanish-American War and various other colonial military ventures of that time. But I wound up excerpting and reposting quite a bit of it here in 2003 as the hype and pre-release advertising led America inexorably into the invasion of Iraq.

Cutting and pasting Twain’s words into a blog in 2003 was much simpler than it had been reproducing those words 12 years before that, when I used a photocopier and rubber cement to include parts of his “War Prayer” in a ‘zine during the run-up to the first Gulf War under the first President Bush.

The piece is characteristic of older, angrier Twain. By 1905 he’d had it with you people and with the world. It wasn’t actually published until more than a decade after his death, in 1923. “I have told the whole truth in that, and only dead men can tell the truth in this world,” he had said. “It can be published after I am dead.”

The first paragraph, one long sentence, continues, painting the picture of a nation enraptured with the idea of a glorious war: “… nightly the packed mass meetings listened, panting, to patriot oratory with stirred the deepest deeps of their hearts, and which they interrupted at briefest intervals with cyclones of applause, the tears running down their cheeks the while; in the churches the pastors preached devotion to flag and country, and invoked the God of Battles beseeching His aid in our good cause in outpourings of fervid eloquence which moved every listener.”

It’s there, in the churches preaching “devotion to flag and country” that the rest of Twain’s short story is set:

Sunday morning came … the church was filled. … The service proceeded; a war chapter from the Old Testament was read; the first prayer was said; it was followed by an organ burst that shook the building, and with one impulse the house rose, with glowing eyes and beating hearts, and poured out that tremendous invocation:

God the all-terrible! Thou who ordainest,
Thunder thy clarion and lightning thy sword!

Then came the “long” prayer. None could remember the like of it for passionate pleading and moving and beautiful language. The burden of its supplication was, that an ever-merciful and benignant Father of us all would watch over our noble young soldiers, and aid, comfort, and encourage them in their patriotic work; bless them, shield them in the day of battle and the hour of peril, bear them in His mighty hand, make them strong and confident, invincible in the bloody onset; help them crush the foe, grant to them and to their flag and country imperishable honor and glory —

The preacher continues, his eyes shut, so caught up in the zealous enthusiasm of his prayer that he doesn’t notice the “aged stranger” who has entered the church, making his way up the center aisle to stand next to him at the pulpit:

With shut lids the preacher, unconscious of his presence, continued his moving prayer, and at last finished it with the words, uttered in fervent appeal, “Bless our arms, grant us the victory, O Lord and God, Father and Protector of our land and flag!”

The stranger touched his arm, motioned him to step aside — which the startled minister did — and took his place. During some moments he surveyed the spellbound audience with solemn eyes, in which burned an uncanny light; then in a deep voice he said:

“I come from the Throne — bearing a message from Almighty God!” The words smote the house with a shock; if the stranger perceived it he gave no attention. “He has heard the prayer of His servant your shepherd, and will grant it if such be your desire after I, His messenger, shall have explained to you its import — that is to say, its full import. For it is like unto many of the prayers of men, in that it asks for more than he who utters it is aware of … Is it one prayer? No, it is two — one uttered, and the other not. Both have reached the ear of Him who heareth all supplications, the spoken and the unspoken. …

“You have heard your servant’s prayer — the uttered part of it. I am commissioned by God to put into words the other part of it — that part which the pastor — and also you in your hearts — fervently prayed silently. And ignorantly and unthinkingly? God grant that it was so! You heard the words ‘Grant us the victory, O Lord our God!’ That is sufficient. The whole of the uttered prayer is compact into those pregnant words. Elaborations were not necessary. When you have prayed for victory you have prayed for many unmentioned results which follow victory — must follow it, cannot help but follow it. Upon the listening spirit of God fell also the unspoken part of the prayer. He commandeth me to put it into words. Listen!

And this is where Twain provides what he called “the whole truth”:

Lord our Father, our young patriots, idols of our hearts, go forth into battle — be Thou near them! With them — in spirit — we also go forth from the sweet peace of our beloved firesides to smite the foe. O Lord our God, help us tear their soldiers to bloody shreds with our shells; help us to cover their smiling fields with the pale forms of their patriot dead; help us to drown the thunder of the guns with the shrieks of their wounded, writhing in pain; help us to lay waste their humble homes with a hurricane of fire; help us to wring the hearts of their unoffending widows with unavailing grief; help us to turn them out roofless with their little children to wander unfriended in the wastes of their desolated land in rags and hunger and thirst, sports of the sun flames in summer and the icy winds of winter, broken in spirit, worn with travail, imploring thee for the refuge of the grave and denied it —

For our sakes who adore Thee, Lord, blast their hopes, blight their lives, protract their bitter pilgrimmage, make heavy their steps, water their way with their tears, stain the white snow with the blood of their wounded feet!

We ask it, in the spirit of love, of Him Who is the Source of Love, and Who is the ever-faithful refuge and friend of all that are sore beset and seek His aid with humble and contrite hearts. Amen.

That was awful thoughts and awful words — words Twain hoped would make the pious devout celebrating war “pause and think.” He expected those words would provoke an argument. He expected that the pious adherents of “country and flag” would protest that they did not desire such awful things, and that this was not what they intended or meant when they prayed “Grant us the victory.” He expected them to reject his blunt, unforgiving description of the coming carnage and to profess to be offended by his implied accusation that they would take delight in such things.

But I’ve come to think that Twain was wrong. The error here for misanthropic, disillusioned, cynical old Mark Twain was that he was not cynical enough. 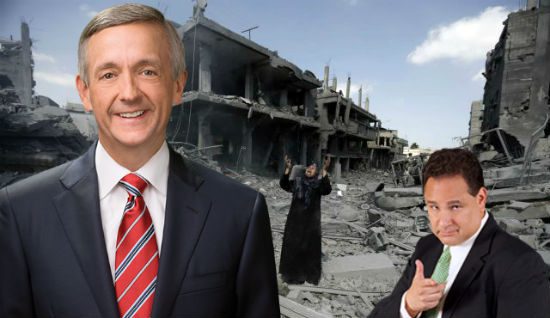 Consider, for example, how excited CBN’s David Brody and Southern Baptist pastor Robert Jeffress seem to be about the prospect of war with North Korea:

Sometimes you’ve got to stop evil. It’s biblical. In North Korea, it’s pretty clear that their dictator is downright evil. So tonight, Pastor Robert Jeffress, a longtime evangelical backer of Donald Trump, just released a statement saying the president has the moral authority to take out Kim Jong Un. This comes after Trump said today that if North Korea continues to threaten the U.S. then they will “be met with fire and fury like the world has never seen.”

Here’s the statement given to The Brody File:

“When it comes to how we should deal with evil doers, the Bible, in the book of Romans, is very clear: God has endowed rulers full power to use whatever means necessary — including war — to stop evil. In the case of North Korea, God has given Trump authority to take out Kim Jong-Un. I’m heartened to see that our president — contrary to what we’ve seen with past administrations who have taken, at best, a sheepish stance toward dictators and oppressors — will not tolerate any threat against the American people. When President Trump draws a red line, he will not erase it, move it, or back away from it. Thank God for a President who is serious about protecting our country.”

Twain imagined that the cruelty of the second, unspoken prayer articulated by the aged stranger would give pause to patriots celebrating war. He imagined, at the least, that his rebuke might anger or offend them — prompting them to deny any unspoken wish to “wring the hearts of their unoffending widows with unavailing grief” or to “tear their soldiers to bloody shreds with our shells.” Twain expected them to defend themselves from his accusation that they secretly delighted in the prospect of the enemy’s children forced to “wander unfriended in the wastes of their desolated land in rags and hunger and thirst.”

But it turns out they’re fine with both prayers. They’re not merely silently implying the second prayer uttered by Twain’s celestial messenger — they’re praying both prayers, out loud. With a smile.

Twain’s parable ends with the congregation dismissing the visitor as “a lunatic, because there was no sense in what he said,” but Jeffress and Brody and countless other pious members of the 81 percent think it made perfect sense. They endorse every word of it with a hearty “Amen!”