A letter from the faculty lounge

A letter from the faculty lounge August 10, 2017 Fred Clark

Richard Mouw writes “A letter to Jerry Falwell, Jr.” I wonder if Falwell will read it.

Mouw is very much a part of what I call the “faculty lounge” of white evangelicalism. This is the Books & Culture crowd — the evangelical clergy, academics and educated laypeople who read Mark Noll’s The Scandal of the Evangelical Mind and nodded along in sad agreement. Faculty lounge evangelicals read and write books published by Eerdmans and Zondervan and IVP. These folks all know and respect Richard Mouw, president emeritus of Fuller Theological Seminary. (“Ah, yes, Fuller,” the faculty lounge evangelicals murmur approvingly. “Good school. Solid.”) If Mouw ever wants to pen an op-ed for Christianity Today, the door is open.

Jerry Falwell Jr., like his father, was never part of that world. Falwell’s constituency rarely interacts with that world. Most of the white evangelicals who support and follow Falwell have never heard of Richard Mouw, or of Fuller, or Noll, or Eerdmans. They never subscribed to Books & Culture and the kind of Christian books they read weren’t ever reviewed there. They’re far likelier to be reading Charisma than Christianity Today, but print magazines and journals usually play less of a role in their media diet than Christian radio and Christian television do. Fuller seminary is either someplace they’ve never heard of or else it’s vaguely on a list of suspiciously “intellectual” places that raise red flags on the résumés of their pastoral search committees. (“Fuller?” these evangelicals say, frowning. “I’d feel better if it said Moody Bible Institute.”) 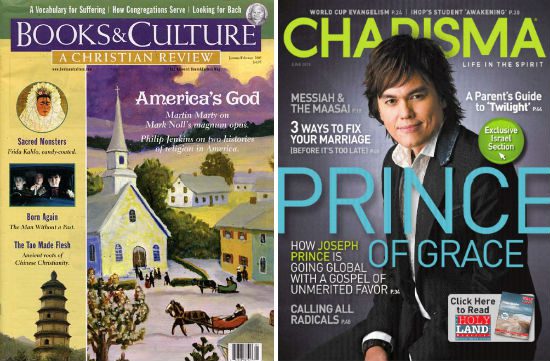 Richard Mouw and Jerry Falwell Jr. are both evangelical Christians, both leaders of prominent evangelical institutions. But, as Mouw writes to Falwell, they “travel in very different parts of the evangelical world.” That understates the situation. They travel in different worlds — in the distinct realms of separate constituencies that rarely, if ever, communicate.

Falwell’s world is a lot bigger — at least in terms of numbers and market share. And it is much, much louder.

Does Jerry Jr. even know who Richard Mouw is? Maybe. Probably. But I doubt he feels any real kinship, or any obligation to respond in the same winsome, collegial tone Mouw extends in his invitation to dialogue.

The gulf between these two evangelical worlds has become more apparent due to the white-evangelical-fueled rise of Donald Trump. The faculty lounge has always been separate from, and cautiously critical of, the religious right embodied by Jerry Jr.’s father. And that political disagreement is the focus of Mouw’s letter — he’s a Never Trumper while Falwell is, infamously, an Always Trumper.

But there’s more to it than politics and opinions about Donald Trump. The gap is also theological and epistemological and ecclesiological — encompassing all that stuff Noll wrote about in Scandal.

And it has a great deal to do with money and power.

In any case, my point here is not to enumerate or to analyze all of the reasons why Falwell and his constituency don’t listen to what faculty lounge evangelicals have to say. My point, rather, is simply to note that they don’t.

August 9, 2017
Robert Jeffress and 'The War Prayer'
Next Post