Nothing at all occurred between those two dates to cause Geisler or any of his fellow conservative evangelicals to regard any of this differently. If there were, for example, any notable Supreme Court decisions involving any of this, they were not seen as significant enough to be mentioned or to require this section to be revised.

The book was updated with a then-futuristic, oh-so 1975 cover, but not with any response to Roe v. Wade. 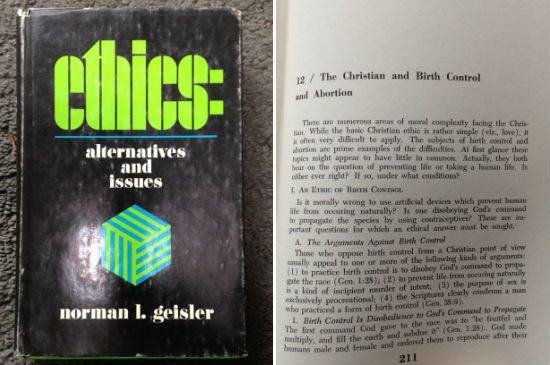 3. Abortion in Conception Without Consent — Should a mother be forced to give birth to a child conceived by rape? Is there a moral obligation to generate a child without consent? This raises the whole question of the moral duty of motherhood. Can one be forced to be a mother against her will? Is her womb a mere tool for the tyranny of outside forces of life? This is a delicate question but it seems to involve a negative answer. Birth is not morally necessitated without consent. No woman should be forced to carry a child if she did not consent to intercourse. A violent intrusion into a woman’s womb does not bring with it a moral birthright for the embryo. The mother has a right to refuse that her body be used as an object of sexual intrusion. The violation of her honor and personhood was enough evil without compounding her plight by forcing an unwanted child on her besides.

September 20, 2017
We Are Being Governed by Fools
Next Post