In a rare display of economy and pacing, we skip directly from Chloe’s midflight conversion to this at the beginning of the next chapter:

Buck called New Hope Village Church to set up an early evening meeting with Bruce Barnes, then spent most of the afternoon at the Chicago bureau of Global Weekly.

This is a remarkably streamlined transition and a radical, but welcome, departure from the pattern of the book so far. Sure, the first two words of Chapter 23 are “Buck called,” but we’re not forced to sit through a transcript of that phone call even though it would have been a chance to name-check Loretta. We’re also not forced to slog through all the logistics of the remainder of the flight from New York, the landing in Chicago, Buck’s getting off the plane, his choice of rental car and drive into the city, etc.

This might be further confirmation of my theory that Jerry Jenkins took a breather just after typing Chapter 21 and, for the first and only time, skimmed through the preceding finished pages. Maybe he learned from that. Maybe he thought to himself, “Hmmm, I’ve expended a great deal of ink so far on the minutiae and logistics of travel, which does nothing to advance the story or the characterization.” If he did realize as much, of course, he was still Jerry Jenkins — so he wasn’t going to go back and rewrite any of the earlier pages, but maybe he decided to try to do less of this from now on. Or perhaps he was just getting lazy, trying to spare himself a bit of work and — as a happy side effect — sparing us readers some extra tedium as well.

In any case, here we are at the Chicago office:

News of his becoming their boss has swept the place, and he was greeted with coolness by Lucinda Washington’s former assistant, a young woman in sensible shoes.

Global Weekly apparently conducts its internal business in accordance with its journalistic motto: “We won’t tell anyone.” Why send out a memo announcing Steve Plank’s departure and Buck’s promotion? Some form of the news will eventually get around to everyone through the office gossip grapevine.

“Sensible shoes” is, of course, a cue that we’re supposed to dislike this young woman. Only two kinds of women exist in Left Behind. They can be, like Lucinda Washington, a madonna. Or they can be, like this young woman, the other kind. “Sensible shoes,” for LaHaye and Jenkins, means “unladylike shoes,” and all women who are not ladies are whores. 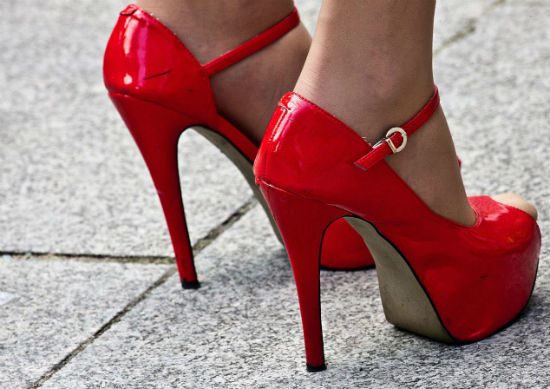 The misogyny is palpable, but we’ve had plenty of opportunity to explore that before now, so let’s set aside for the moment L&J’s warped understanding of gender and consider instead their warped understanding of footwear. The authors seem to imagine all of their lady madonnas dressed like Donna Reed. Even their maternal stereotypes like Lucinda Washington are walking around in impractical high heels. Their whores meanwhile — a category that includes not just supposed flirts like Hattie, but all female executives and single women — are apparently all wearing “sensible shoes.” They seem to think of comfortable flats as slutty. Does that mean they would consider a pair of four-inch stilleto-heeled stripper shoes to be matronly?

Jenkins continues his thumbnail sketch of this ladder-climbing young trollop:

She told him in no uncertain terms, “Plank did nothing about replacing Lucinda, so I assumed I would move into her slot.”

Her attitude and presumption alone made Buck say, “That’s unlikely, but you’ll be the first to know. I wouldn’t be moving offices just yet.”

If there’s one thing Cameron Williams can’t abide it’s presumptuous young people trying to buck authority. Except, of course, for himself. “Buck” is, after all, a masculine nickname.

Both Buck and she-Buck here are, yet again, acting like they work for Global Quarterly. Lucinda Washington disappeared 9 days ago. Since then, at least two final publication deadlines would have come and gone. Jenkins lacks any sense of the relentless urgency of a weekly production schedule. Whether or not Buck wants to accept it, this young woman already got a battlefield promotion the day that Lucinda disappeared. The battle doesn’t stop just because the lieutenant got killed. The sergeant takes over without waiting for word from central command and the mission continues.

The same dynamic would have occurred in every institution that didn’t have the luxury of shutting down for a week or two in the aftermath of The Event. There would be first-year interns in charge of emergency rooms, rookie deputies stepping in as acting sheriffs. Every mayor, marshal and manager who had disappeared, died or crawled into the fetal position would have been replaced, out of sheer necessity, within hours of The Event.

The characters in LB are all behaving eerily blasé about the disappearances, as though The Event were something they had all read about in history books instead of a world-altering trauma they had actually experienced less than two weeks ago, but that’s not how any of this would really play out. Nine days after The Event, none of those assistants thrust into leadership roles would yet have had a full night’s sleep. They’d all be wearing sensible shoes, the same clothes they had on yesterday and the day before, and the bedraggled, frantic look of those surviving on adrenaline and necessity instead of food and sleep. Suddenly over their heads with others relying on them, they would either have learned to swim or they’d have drowned, replaced immediately by someone with even less experience.

If it takes the generals and the other higher-ups nine days before they even begin talking about sending replacements and reinforcements to carry out the necessary function of their now-missing lieutenants, then those useless REMFs deserve to be “greeted with coolness” by those who never abandoned their posts.

Buck’s response above is essentially to inform this young woman that he expects her to continue carrying out all of Lucinda’s duties and responsibilities indefinitely, at her previous pay grade, without any formal increase in her authority to carry out those tasks and without even a trace of support or gratitude from her new boss. This is yet another example of one of our supposed heroes behaving despicably as the authors give each other high-fives and celebrate the way Buck put this uppity, sensible-shoed bitch in her place.

These are truly awful people.