We’re back to the ’70s channel for the never-turned-off music piped into the Big Box. Last night it provided Don McLean’s “American Pie” three times, which means I spent roughly 5 percent of my shift listening to that 8-minute song. That may violate OSHA regulations, or possibly even the Geneva Conventions.

I realize there are worse things than hearing “American Pie” three times in such a short span. Such as, for example, hearing it even once at karaoke. Or getting stuck in a conversation in which someone offers to “decode” the song’s allegedly cryptic lyrics.

Those lyrics are sometimes quite lovely, sometimes a bit ponderous, but they’re not really all that difficult to understand. McLean, writing in 1971, looks back to the innocence of popular music in his childhood, as embodied in poor doomed Buddy Holly, and he mourns the loss of that innocence. He sticks to that theme throughout, reinforcing it with many examples, none of which requires much deciphering. “Decoding” the meaning of “American Pie” is about on the level of decoding Pilgrim’s Progress. (Hint: the Slough of Despond is Altamont.) 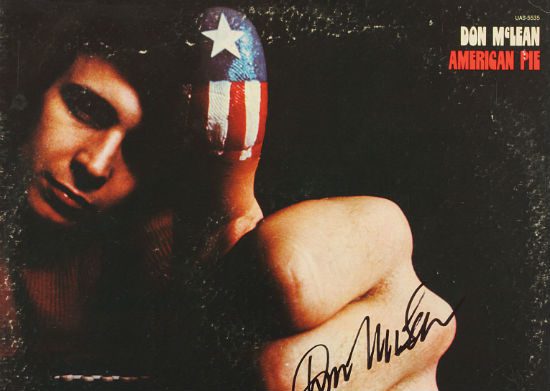 The song only really gets confusing in the parts where it is, itself, confused. For example: “While the king was looking down / the jester stole his thorny crown.” OK, fine. Dylan supplants Elvis. Got it. But that follows this: “When the jester sang for the king and queen / In a coat he borrowed from James Dean.” So the king is sometimes Elvis and sometimes JFK. That’s not cryptic, just a bit sloppy.

Those intent on “decoding” the song shouldn’t focus on its obvious 1-to-1 allegories, but on what doesn’t make the list. Here we have a survey of American popular music, 1959 to 1971, and it skips right past the Beach Boys. That’s perhaps a shrewd artistic choice for McLean — “Good Vibrations” would complicate his main theme of innocence lost. But this is bad history. It’s not a good sign for your thesis if you have to leave stuff out to avoid detracting from the argument.

Anyway, I wound up hearing this song (three times) while I was thinking about Left Behind and how to work myself up to re-engaging where we left off with the World’s Worst Books. And it seems to me that there’s something about the way people approach the evident symbols and references in “American Pie” that’s similar to the way people complicate the book of Revelation — avoiding the obvious references to create a meaning that’s more arcane and occult.

We should cut a bit of slack for those so perplexed by John’s Apocalypse that they weave whole new meanings out of it. It was, after all, written nearly 2,000 years ago, in a far away land, in a language that most readers do not speak. What might it be like, 2,000 years from now, for some future reader to try to make sense of “American Pie”? The culture that produced it would be long gone, along with all of the cultural referents it relies on to communicate.

Now imagine, as well, that this future audience has no idea what a pop song is. The genre does not exist in their culture, except in opaque artifacts like this one, so they have no idea how such things should be read (or sung, or heard). Trying to make sense of it in their context, they might be forced to hazard a guess. And they’d likely guess wrong.

“American Pie,” they might decide, is a prediction. It foretells future events. How else could an ancient text be meaningful for future (for them, present-day) readers, unless that text spoke about future times? And off they would go in a very wrong direction, reinterpreting everything according to this guess. They would eagerly watch the news for signs and portents of the coming Jester, who will seize the throne of a one-world government before the sergeants play their marching tune in the Final Battle at the end of history.

Maybe there would also be future scholars who would try to rein in this wild speculation. They’d have researched ancient cultures and learned all about Buddy Holly and the Beatles and about Rebel Without a Cause, Hell’s Angels, and Dylan’s motorcycle accident. And about this one time, at band camp (because sorting all the details from 2,000 years ago can be tricky and it’s possible they’d get their American Pies a little confused).

But it would be too late. The guess would be more exciting than all that boring scholarship. Whoever this “Dylan” might have been, he can’t have been The Jester That Is Foretold, because he’s long dead. There’s no point listening to some boring academic spout such theories when we already know that the Jester will arise any day to do glorious battle against the sergeants of the wicked Anti-Jester. And then the great flood will destroy the world, but the righteous will be carried away in the Jester’s Chevy past the eternally dry levee in the great beyond. Amen and amen.

Lest the title of this post leave you with an unwelcome earworm, let’s end with this:

October 13, 2017 LBCF, No. 155: 'Super powers'
Recent Comments
0 | Leave a Comment
"Fred is 100% correct that being a Catholic bishop now carries a presumption of guilt ..."
Professor Rudolf Laschenkohl Don’t give yourself away
"Did you catch "The Physicians of Vilnoc" and "Masquerade in Lodi" last year? I didn't ..."
Ursula L Borne from original sin
"As for the all the Catholic cardinals, bishops, and whatnot: They have long since lost ..."
Professor Rudolf Laschenkohl Don’t give yourself away
"Solzhenitsyn's attitude toward television and modern music reminds me of certain guy I used to ..."
Professor Rudolf Laschenkohl Don’t give yourself away
Browse Our Archives
get the latest from
slacktivist
Sign up for our newsletter
POPULAR AT PATHEOS Progressive Christian
1