Update: The Slacktivixen spent a long afternoon in cordial-but-firm discussions with various folks at the local Citizens Bank. They have agreed not to apply/steal overdraft charges on the transactions overdrawn due to their mistake. This is the right thing to do, but it was not automatic, convenient, simple, or certain. When customers raise a stink, such errors will — reluctantly — not wind up making money for the bank. But when customers do not have the time, means, energy, and wherewithal to raise such a stink, the errors will remain profitable, and thus the incentives to make such errors — whether deliberately, or simply due to not taking sufficient care to avoid them — remain.

On the fundraising side, thank you all so much. We’re covered and recovered for the time being. (Although, of course, we’re always grateful for anyone with the kindness and ability to donate.) You folks are wonderful.

Citizens Bank just pulled a fast one. It was, they admit, their mistake. “We take full responsibility for that,” a bank official told my wife. By which he meant they will not take any responsibility at all. They mean, instead, that they intend to take an additional $210 from our account.

What happened was the next chunk of college money arrived in my wife’s account. It usually arrives middle-of-the-month-ish, so it was nice to get it a few days earlier this time. This is loan money we don’t get to hold for very long. It’s money that is already spoken for, and so it gets one-timed directly to WCU as soon as it arrives. That’s what my wife did: She saw the money appear in our balance and sent off the payment to the school. And then, as usual once that’s taken care of, she paid a bunch of other bills.

But it turns out that increase in the balance was not the college loan money. It was, instead, a bank error. Citizen’s Bank had deposited someone else’s money into our account by mistake — an amount coincidentally, and perhaps suspiciously, very close to the usual amount of the loan money.

Two days later, Citizens realized their mistake — or, perhaps, “mistake” — and withdrew the same amount from out of our account. This left us with a balance insufficient to cover six transactions made in the meanwhile. And Citizens Bank is now charging us an overdraft fee on each of them.

Our account is now, in effect, temporarily frozen until the actual school funds arrive, hopefully soon, plus another $200 from sources unknown, lest any additional transactions come up short due to those overdraft fees, incurring another costly round of cascading fees and further increasing our household contribution to the $30 billion annually taken by banks in their “overdraft protection” racket. (That’s why this is also a fundraising post.)

This is some Old Man Potter- and Wells Fargo-level shenanigans. 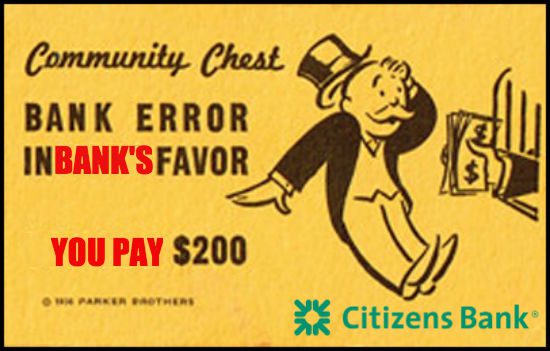 So, in short, Citizens Bank messed up and they say they’re taking “full responsibility” for that. But what they’re actually taking is $200 in pure profit. This has proved to be a very lucrative mistake. It’s a mistake that provides them with a better than 10-percent return. (Plus whatever overdraft fees they’re charging the other customer whose initial deposit apparently took several days to get from the teller’s hand to their account.)

Is such a profitable mistake replicable and scalable? Yes. Yes it is.

Does profiting from this create incentives for Citizens Bank to repeat such “mistakes,” deliberately, as a revenue stream? Yes. Yes, it does.

Can we be certain that Citizens Bank is a benevolent, trustworthy institution that would never stoop to something as sleazy and underhanded as deliberately making such “mistakes” in order to profit from the resulting overdraft fees? No. No we cannot.

And no we should not.

This is, in fact, what Citizens Bank is explicitly telling us. Our mistake, they say, was that we trusted them. We saw our balance increase by an expected amount near an expected time and trusted that our bank was competent, rather than poring over the full details of our statement to confirm that the money coming into our account was coming from where it was supposed to come from. Apparently, it is primarily the customer’s job to do this — our responsibility and not in any way the bank’s. We made the mistake of trusting that they could handle this. We made the mistake of not assuming that they were likely to bungle a simple transaction and of assuming that we were therefore free to rely on them without double- and triple-checking every step and micro-transaction in our account.

I admit, we did trust them. We didn’t double-check their work. We assumed that Citizens Bank was minimally capable of keeping track of money and of, you know, banking. That was our mistake and we’re paying for it now.

We won’t make that mistake again with our next bank, which we are now actively seeking.

But it’s very likely that Citizens Bank will make that “mistake” again. And again and again — as often and to as many people as they can get away with. Because it makes them money and they thus have every incentive to do so. And because — by insisting that our trusting them was a punishable mistake — this is what they are telling us they will do to anyone who fails to scrutinize every line and transaction on their statement.

Allow me to agree with what Citizens Bank says about itself: You should not trust them to handle the simplest of transactions.

Thanks to all of that, I need to pass the hat.

This is where I would usually point to the cheery little donate button in the sidebar, but the new Patheos layout got rid of that, so I’ll have to do this instead: Please click this link. (PayPal isn’t set up to accommodate those who go by their middle name but, yes, “George” is me. Only PayPal, PennDOT and the IRS call me that. And telemarketers.)

If you’re able and willing to chip in a bit, this would be a wonderful time to do so. Thanks.

October 10, 2017
Everybody knows that the captain lied
Next Post

The Inherent Relationship of Love and Justice (Part...
We can explore ways that understanding Universal love that lead us, not...