Johnnie Moore, the former communications VP at Liberty University who now identifies himself as “an informal spokesperson for the evangelicals who advise the Trump administration,” wants you to know that white evangelical support for Trump’s recognition of Jerusalem as Israel’s capital has nothing at all to do with Rapture folklore, premillennial dispensationalism, “Bible prophecy,” or any of the End Times theology taught at Liberty (home of the LaHaye Ice Center and the LaHaye Recreation and Fitness Center).

Certainly not. Such a thing never entered the mind of any red-blooded American follower of Christ and Trump. That’s just an unfair misperception being promoted by the crooked liberal media, Moore says.

The truth, Moore says, is that “Evangelicals support Trump’s Jerusalem decision because we care about the Palestinians“:

Evangelicals in the United States supported President Trump’s decision precisely because of their concern for the Palestinians in addition to their special relationship with Israel and the Jewish people.

Evangelicals are also tired of seeing innocent Palestinians abused and used by tyrants and terrorists. …

Evangelicals close to the administration did not support the president’s decision because we favor Jews over Arabs nor for any obscure (and highly contested, I might add) theological reasons like those speculated about, reported upon and sensationalized in recent days.

Evangelicals supported the decision because we believe it was the smart and right thing to do. Ours was a geopolitical opinion, and not a theological one.

I’m intimately familiar with this line of argument. It’s identical to what I used to hear from corporate executives back when I was working on the campaign for divestment from Apartheid South Africa. “Constructive engagement,” the executives all said. “We’re staying because we care for black South Africans and only want what’s best for them.”

They’d repeat these stale talking-points while smirking disingenuously. I appreciated that. Unlike Moore, they at least had the courtesy not to pretend that they expected anyone to find their self-serving cover story credible.

The weirdest thing about Moore’s column peddling this line is his apparent expectation that people reading what he writes for Religion News Service won’t be able just as easily to glance over at white evangelical media — at the websites, TV, radio, and print publications where his people are talking candidly amongst themselves.

Let’s click over to the Christian Broadcasting Network (“the Christian perspective”!) and see how “Trump’s Jerusalem decision” is being discussed there: 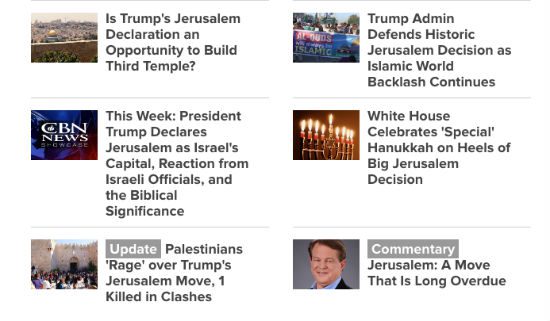 Hmm, nothing there about “we care about Palestinians” (Gordon Robertson’s commentary paints them as violent, sub-humans displaying an insufficient gratitude for the benefits of colonialism). But there’s a great deal about the “Biblical Significance” of America’s Jerusalem embassy and about whether it’s “an Opportunity to Build Third Temple.” None of what CBN’s writers have to say contradicts any of the reporting about theological views driving evangelical support  — the reporting that Moore complains is sensationalistic. The articles we looked at earlier today describe the very same views described and advocated by the CBN writers.

In short — according to CBN, according to everyone who writes for CBN, and according to the millions of white evangelicals who read CBN — Johnnie Moore is full of it.

For a more honest representation of why white evangelicals “support Trump’s Jerusalem decision,” let’s turn to one of those CBN pieces: “‘Biblical Timing of Absolute Precision’: John Hagee Praises Trump’s Jerusalem Decision.” CBN is reporting on the reaction from John Hagee because he’s the “founder and chairman of Christians United for Israel,” and because he represents the views of their white evangelical readers much better than Johnnie Moore’s attempt to pose as a savvy political insider ever could.

Hagee’s response is partly the application of premillennial dispensationalist boilerplate, and partly just a word salad of disconnected phrases from PMD folklore. He explains that he urged President Trump to make his Jerusalem announcement this year because of numerology:

He also talked with the president about the significance of moving the embassy in this “Jubilee Year.”

“…I told him that God measures everything in modules of 50 years,” Hagee explained to CBN News. “And I said this is a principle that’s carried out in Leviticus, the 25th chapter.”

“‘And you add 50 to 1967, and you’re in 2017.’ I said, ‘This is the year to move the embassy and make that declaration because it is a biblical timing of absolute precision,'” Hagee said. “Thank God, he’s going to do exactly that.”

The year of Jubilee — described in great detail there in Leviticus 25 — involves debt cancellation, the release of prisoners, the emancipation of slaves, and the redistribution of the means of production. Hagee’s attempt to twist that passage into something about 50-year intervals of arbitrary “prophecy” milestones doesn’t even qualify as an “interpretation.” He’s just making stuff up.

I wondered what it was, exactly, that made Hagee decide to regard 1917, 1967, and 2017 as “Jubilee Years.” That curiosity sent me down a Google hole that I would not recommend you explore unless you have a great deal of free time, a fondness for mid-’90s Geocities web design, and a high tolerance for incoherent rambling. The saving grace of this experience was realizing that for every weird End Times website advocating Hagee’s “Jubilee” prophecies, there was also a weird End Times website angrily denouncing the scheme in favor of some competing grand theory of premillennial dispensationalist numerology. (I briefly considered offered to mediate between these warring factions as a disinterested third party, but I realized that any such talk of “peacemaking” would lead them all to conclude that I was a tool of the Antichrist.)

I suppose Hagee’s new emphasis on “modules of 50 years” is a bit less astrologically bonkers than his earlier obsession with “modules” of “Blood Moons” — his idea that calendar years involving two total lunar eclipses were the secret code for understanding God’s Plan for History. However goofy his ever-shifting theories may be, though, they fall under the category of “theology” and not, as Moore insists, of “geopolitics.”

The problem is that Hagee’s theology has very real — and very harmful — geopolitical implications:

“God found a man by the name of Abraham and He made a covenant with him,” Hagee continued. “Abraham, Isaac and Jacob, recorded in the book of Genesis, that He was going to give them a strip of real estate in the Middle East, and that piece of real estate would be theirs forever.”

That “piece of real estate” — according to John Hagee’s theology, and to the theological view shared by most white evangelical Americans — doesn’t just include all of Israel’s 1967 borders, or even just that plus the occupied territories of the West Bank. What Hagee and his fellow “Bible prophecy” evangelicals have in mind is what they call “Greater Israel” — a “piece of real estate” that covers everything from Syria to the Sinai and from the Mediterranean to the Euphrates. This is, for Hagee et. al., the hoped for and prophesied “one-state solution” for the region.

It’s a weird and recklessly destabilizing idea, and one that seems dangerously comfortable with something very much like ethnic cleansing. But at least Hagee has the decency not to pretend that he supports this idea because of some feigned concern “for the Palestinians.”