Embrace the deception, learn how to bend

“I’m 99.9 percent sure it’s not parody,” Messmer said. “It’s not something strategic done by the Democratic side or someone that’s looking to criticize the conservative or Republican position.

“I do hold back that .1 percent,” Messmer said. “This might be one of the greatest examples of political performance art I’ve ever seen.”

Much more likely, Messmer said, is that Sykes is trying to tap into a potent brand of politics, the kind that helped Trump carry Missouri by 19 percentage points last year.

Sykes’ candidacy is so outrageous that Messmer, like me — and like the St. Louis Post-Dispatch, can’t quite be 100-percent sure it’s not all a big put-on. I mean, just look at his name. It all seems a bit too … well, too something. 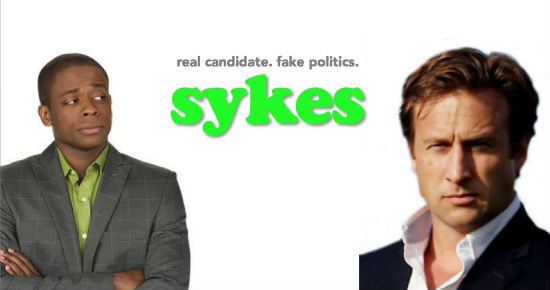 After receiving a press release announcing his candidacy, the newspaper reached out to the candidate to learn more about him and about his political views:

Modeling his campaign after Make-America-Great-Again-style populism, the Republican Sykes last week made a surprise leap into the race to unseat U.S. Sen. Claire McCaskill, D-Mo. The Navy veteran and Harvard graduate is marketing himself as a “political outsider” in support of President Donald Trump’s “America first” agenda.

His announcement came as ex-White House chief strategist Steve Bannon was scouting out candidates around the country he believes can carry the “anti-establishment” banner in 2018. Sykes said he “exchanged pleasantries” with Bannon when Bannon visited St. Louis last month.

But Sykes, whose campaign is supposedly based on his businessman’s acumen, declined to talk about his business. Or his personal background. He’s lived in Missouri for less than a year but says he has ties with the state because his family used to vacation there. Where? the newspaper asked. “Look, I’m not going to talk about family stuff,” Sykes said. It’s hard to accept that such an odd response isn’t, as Messmer says, some kind of satirical “performance art.”

In a 20-minute interview on Monday, Sykes, 37, struggled to answer questions about when the United States should exercise military force. Sykes declined a second interview. But he did send over an 11-page document in a question-and-answer format.

In the document, Sykes criticizes political correctness. He takes aim at modern feminism, praises Breitbart News, derides “Big Media,” belittles the Muslim faith and, in a jab at the nation’s education system, says Detroit “is crawling with uneducated people who can’t read a breakfast menu.”

In his final answer, Sykes responded to the question: “Do you favor women’s rights?”

“Chanel (Rion), my fiancee, has given me orders to favor these rights, so I’d better,” he said. “But Chanel knows that my obedience comes with a small price that she loves to pay anyway — I want to come home to a home-cooked dinner at six every night, one that she fixes.

“It’s exactly the kind of family dinner that I expect one day my future daughters will learn to make after they too become traditional homemakers and family wives — think Norman Rockwell here — and Gloria Steinham (sic) be damned.”

Chanel? So many of the details here scream “Poe.” The appeal here is, apparently, to social conservatives — the very same people who, while applauding his women-in-the-kitchen sentiments, would also describe his domestic arrangement as “living in sin.” Or consider his remarks about getting rid of all social insurance to “end dependency except for truly elderly” people. Truly elderly?

Sykes also hits all the racist dog-whistles of white nationalist candidates, but always in a way that’s a bit pitchy — just a little bit too explicit, a little too over-the-top. It’s just the way an artfully subtle satirist would do it if this were some kind of Andy Kaufman-esque performance.

But then it’s also just the way someone would do it if that someone was an impenetrably obtuse, misplaced-resentment-fueled true believer who’s fed himself a steady diet of nothing but Breitbart News, InfoWars, Rush Limbaugh, and WorldNetDaily. And that, alas, appears to be what we have here in “Courtland Sykes.”

This Post-Dispatch article is from last fall — October 8 — but it’s making news again this week because, on Tuesday, Sykes reposted his “women’s rights” screed on his campaign Facebook site. That’s how it wound up exploding on social media where it has been widely described as a “Facebook rant.”

But it’s not that. Thinking of it only as a Facebook rant makes it sound like something written impulsively and then posted hastily by someone who might have spoken more carefully after getting a bit more sleep. That’s not what this is — this is from a campaign document voluntarily sent to a newspaper several months ago. Sykes has had several months to rethink, clarify, or qualify his comments, but hasn’t done so. The only change he made was to correct his misspelling of Gloria Steinem’s name.

You can read for yourself what “Courtland Sykes” posted on Tuesday. I am, like Prof. Messmer, 99.9 percent sure it’s not parody. But I am 100-percent sure that this guy is unreal.