I feel so good if I just say the word

• “Rep. Matt Gaetz Goes on Infowars to Complain About Being Called a Conspiracy Theorist.”

Rep. Matt Gaetz of Florida appeared on conspiracy theory outlet Infowars to complain that he is being called a conspiracy theorist for pushing the narrative that a secret memo by the chairman of the House Intelligence Committee proves that the Obama administration improperly sought to spy on Donald Trump and his presidential campaign.

Gaetz appeared on “The Alex Jones Show” … to discuss Republican calls to declassify a memo authored by Rep. Devin Nunes that some Republicans are saying proves claims that the Obama administration abused FISA laws to surveil Trump and his associate. The Republican push, which aims to cast doubt over special counsel Robert Mueller’s investigation into possible Russian interference in the 2016 election, has included flooding social media with the hashtag “#ReleaseTheMemo.”

Alex Jones is now the go-to “journalist” for Republicans like Gaetz and Nunes trying to peddle their message to a sympathetic audience. I suppose they had to turn to Jones after Art Bell left Coast to Coast Live to go into hiding.

Watching these folks flail about and launch their ill-advised desperation shots has me thinking of a line from Mark Felt, one of Andrew McCabe’s predecessors as deputy director of the FBI: “The truth is, these are not very bright guys, and things got out of hand.”

• Speaking of politicians seeking their own level when searching for sympathetic media outlets, President Donald Trump was recently interviewed by British tabloid “journalist” Piers Morgan. Trump took the occasion to dismiss concerns about climate change, which he has previously mocked as a conspiracy and a hoax. This is the president of the United States speaking:

There is a cooling and there’s a heating. I mean, look, it used to not be climate change, it used to be global warming. That wasn’t working too well because it was getting too cold all over the place. The ice caps were going to melt, they were going to be gone by now, but now they’re setting records. They’re at a record level.

This is not true. It is the opposite of true.

• The Oregonian has reposted a letter to the editor it received last fall, for at least two reasons. Here is that letter:

A recent letter in The Oregonian compares a politician’s claim to tell “alternative facts” to the inventions of science fiction. The comparison won’t work. We fiction writers make up stuff. Some of it clearly impossible, some of it realistic, but none of it real — all invented, imagined — and we call it fiction because it isn’t fact. We may call some of it “alternative history” or “an alternate universe,” but make absolutely no pretense that our fictions are “alternative facts.”

Facts aren’t all that easy to come by. Honest scientists and journalists, among others, spend a lot of time trying to make sure of them.  The test of a fact is that it simply is so — it has no “alternative.” The sun rises in the east. To pretend the sun can rise in the west is a fiction, to claim that it does so as fact (or “alternative fact”) is a lie.

A lie is a non-fact deliberately told as fact. Lies are told in order to reassure oneself, or to fool, or scare, or manipulate others. Santa Claus is a fiction. He’s harmless. Lies are seldom completely harmless, and often very dangerous. In most times, most places, by most people, liars are considered contemptible.

• Today is Fred Korematsu Day, honoring the great American who fought for his legal equality and for that of other Americans of Japanese decent who were forced into internment camps during World War II.

Korematsu was a great American. I also think of him as one of the all-time great Freds — earning his place in the Mount Rushmore of Freds: 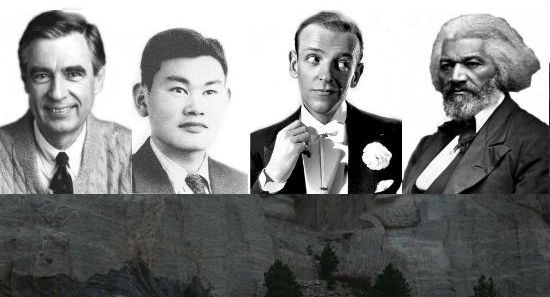 Thus on a semi-related note, I’m happy to learn that Tom Hanks will be playing the part of Fred Rogers in an upcoming biopic loosely based on Tom Junod’s beautiful 1998 Esquire profile, “Can You Say Hero?”

This is an excellent excuse to read that again, which I just did, confirming that it still gets to me. Sniffle.

• Today is Phil Collins’ birthday. I realize that Collins’ post-Genesis career as a pop star is widely regarded as cheesy, uncool, and unhip, and that there’s probably some substantial evidence to support that assessment. I began to reassess that about 10 years ago, though, when I listened to Starlee Kine’s endearingly vulnerable segment for This American Life, “Dr. Phil.”

In the wake of a break-up, writer Starlee Kine finds so much comfort in break-up songs that she decides to try and write one herself — even though she has no musical ability whatsoever. For some help, she goes to a rather surprising expert on the subject: Phil Collins.

Collins offers some helpful advice on the craft of songwriting, but mainly he just listens and tries to comfort. He is so wonderfully kind in his response that I came to view his songs with a greater kindness, too. Even ones like, say, “Su-Su-Sussidio.”

And, in any case, if it weren’t for Phil Collins, we’d have never gotten one of the best TV commercials in recent years:

January 31, 2018 The Mister, the Doctor, the Captain, and the Marshal (and you and me too)
Recent Comments
0 | Leave a Comment
"Yeah, there are some victims of Covid where I'm not all that bothered.Black Friday? Should ..."
WingedBeast Much obliged
"Promises, promises... 😒"
reynard61 Much obliged
"Too many politicians and Wall Street types define "consumers" as "people who can afford at ..."
P J Evans Much obliged
"This kind of hagiography https://www.youtube.com/wat... ?"
Andrew Much obliged
Browse Our Archives
get the latest from
slacktivist
Sign up for our newsletter
POPULAR AT PATHEOS Progressive Christian
1