When the Bible Commands Abortion (Part 1)

Here again is your periodic reminder that the Bible discusses abortion. It explicitly describes the deliberate inducing of a miscarriage — i.e., an abortion — and even details the formula that will produce this result.

This is from the laws of Moses, from the Pentateuch, from a passage in a book that my fundamentalist Sunday school teachers and Christian private school teachers insisted was dictated directly by God to Moses on the top of Mount Sinai. It’s from the fifth chapter of the book of Numbers.

The NIV labels this section “The Test for an Unfaithful Wife.” That’s accurate, but incomplete, since — as the passage itself says — it could also be The Test for a Faithful Wife. It might be better to call it the Test for a Jealous Husband, or — to really cover what’s going on — The Trial by Ordeal to Be Imposed by a Priest When a Husband Suspects His Wife of Unfaithfulness.

It’s rather icky, but it’s canon, so let’s give it a look. Here’s the first bit, Numbers 5, verses 11-15. (I’m quoting from the NIV here, rather than my usual NRSV, just so none of my evangelical cousins worries that the “liberal” NRSV is skewing the text.):

Then the Lord said to Moses, “Speak to the Israelites and say to them: ‘If a man’s wife goes astray and is unfaithful to him so that another man has sexual relations with her, and this is hidden from her husband and her impurity is undetected (since there is no witness against her and she has not been caught in the act), and if feelings of jealousy come over her husband and he suspects his wife and she is impure — or if he is jealous and suspects her even though she is not impure — then he is to take his wife to the priest. He must also take an offering of a tenth of an ephah of barley flour on her behalf. He must not pour olive oil on it or put incense on it, because it is a grain offering for jealousy, a reminder-offering to draw attention to wrongdoing.

A footnote in the NIV helpfully clarifies that an ephah was “probably about 3 1/2 pounds or about 1.6 kilograms.” A representative handful of that gets burned on the altar. The priest keeps the rest because priests gotta eat, too, you know.

I mention this footnote because the NIV supplies three of them in this section of Numbers 5 and I’m sure that my anti-abortion white evangelical friends will want to inspect them all, carefully. They’ll be searching for a reference to some difficult ambiguity in the original language that might suggest translation was especially difficult for this passage. Maybe our translation is just wrong, and the Bible here doesn’t have God commanding his priests to induce miscarriages (i.e., perform abortions).

Alas, these footnotes won’t help with that, sorry. Translation here doesn’t involve any wiggle room to retranslate it into its opposite. The mischievous, post-Happy Meal rewriting of Exodus 22 isn’t an option here.

Anyway, that’s the situation Numbers 5 addresses: A husband is suspicious that his wife has been sleeping with someone else, but he has no evidence to support this suspicion. The woman may be pregnant and he suspects he’s not the daddy. What should he do? What must he do? What did the Lord say to Moses that this husband is commanded to do?

He must “take his wife to the priest.” The priest is going to settle this matter.

How will the priest do this? Will he pray to ask God to reveal whether or not this accused woman has been unfaithful? Will he bring out the old Urim and Thummim to settle the matter? Will he interview the woman, and interview the husband, and then talk to their friends and neighbors and relatives, attempting to deduce the facts of the matter?

No. What the priest will do, instead, is make the poor woman drink something nasty. It’s a trial by ordeal, involving a divinely ordained concoction that will be harmless to the innocent but will act as a sterilizing, abdomen-swelling, abortion-inducing brew if she is guilty.

The Bible gives us the recipe for this. The Lord gave it to Moses and Moses gave it to us and here it is, right there in our Bibles. Let’s pick up where we left off, at verse 16 of Numbers 5:

“‘The priest shall bring her and have her stand before the Lord. Then he shall take some holy water in a clay jar and put some dust from the tabernacle floor into the water. After the priest has had the woman stand before the Lord, he shall loosen her hair and place in her hands the reminder-offering, the grain offering for jealousy, while he himself holds the bitter water that brings a curse. Then the priest shall put the woman under oath and say to her, “If no other man has had sexual relations with you and you have not gone astray and become impure while married to your husband, may this bitter water that brings a curse not harm you. But if you have gone astray while married to your husband and you have made yourself impure by having sexual relations with a man other than your husband” — here the priest is to put the woman under this curse — “may the Lord cause you to become a curse among your people when he makes your womb miscarry and your abdomen swell. May this water that brings a curse enter your body so that your abdomen swells or your womb miscarries.”

Notice that this is still in double-quotation marks because it is the LORD speaking, telling Moses what to say. It’s part of the script God has given to Moses for the commanding of this commandment. That script includes bits where the Lord tells Moses to say what the priest is to say, thus requiring the rare triply nested quotation marks. Those can be a bit confusing — Numbers says that God says that Moses should say that the priest must say — but don’t let that sidetrack us here. The point is this is all presented as instructions from God. This is the Bible telling us what God commands.

And what God commands is that this accused woman must drink this consecrated, oath-fortified, dusty water. And if the woman is pregnant and she has been unfaithful to her husband, then this drink will cause her to miscarry and to never again be able to bear children.

The priest, in other words, is inducing an abortion, in the tabernacle, as commanded by God. 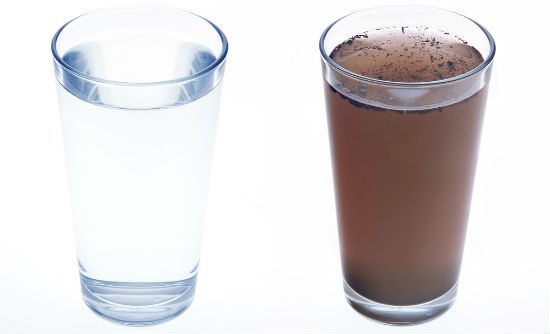 But the bitter water recipe isn’t quite finished. There’s one more ingredient.

“‘The priest is to write these curses on a scroll and then wash them off into the bitter water. He shall make the woman drink the bitter water that brings a curse, and this water that brings a curse and causes bitter suffering will enter her. The priest is to take from her hands the grain offering for jealousy, wave it before the Lord and bring it to the altar. The priest is then to take a handful of the grain offering as a memorial offering and burn it on the altar; after that, he is to have the woman drink the water. If she has made herself impure and been unfaithful to her husband, this will be the result: When she is made to drink the water that brings a curse and causes bitter suffering, it will enter her, her abdomen will swell and her womb will miscarry, and she will become a curse. If, however, the woman has not made herself impure, but is clean, she will be cleared of guilt and will be able to have children.

So that’s the full recipe: holy water, add handful of dust, require woman to say “Amen, so be it,” then dunk a scroll with abortifacient, sterilizing curses written on it into the water. Now it’s ready to serve.

The passage ends with God saying to Moses, more or less, “So that’s it then, that’s what I command my people to do when a husband suspects his wife of infidelity.” The final three verses of Numbers 5 say this:

“‘This, then, is the law of jealousy when a woman goes astray and makes herself impure while married to her husband, or when feelings of jealousy come over a man because he suspects his wife. The priest is to have her stand before the Lord and is to apply this entire law to her. The husband will be innocent of any wrongdoing, but the woman will bear the consequences of her sin.’”

And then God switches gears, like, “OK, then, so anyway, Moses, I need me some hairy, celibate, teetotaling, raisin-avoiding devotees. Nazirite vows. Write this down …” And Numbers 6 heads off in a different direction.

I should say, again, that I very much do not like Numbers 5:11-31. This ugly passage — the Sotah, the Ordeal of the Bitter Waters — is not one I enjoy acknowledging as a part of the canon of my faith. I find it gross and cruel and disturbing.

But it’s there. It’s scripture, holy writ. This is something the Bible says and those of us who revere the Bible as scripture have to contend with that.

So let me explain how I choose to contend with it.

(This is already way too long, so I’ve lifted the rest to a Part 2 post.) 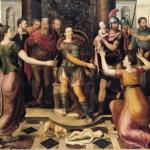