‘Bearing false witness’ is not a synonym for ‘lying’

‘Bearing false witness’ is not a synonym for ‘lying’ February 7, 2018 Fred Clark

USA Today published an editorial yesterday describing how “Trump squanders moral authority — for evangelical leaders.” It’s a capable summary of how the pro-Trump religious right has squandered its birthright for a mess of Old Man Potter-age. Not wrong — although the assumption that the religious right has lost the moral high ground is based on the mistaken notion that they ever had any legitimate claim to the moral high ground in the first place.

And kudos to the paper’s editorial board for turning to Molly Worthen as an authority on white evangelicalism (pun intended).

The sentence that caught my eye was this one:

To this day, he [Donald Trump] bears false witness an average of several times a day and uses vulgarities to denigrate entire nations of people.

One problem with that sentence is the distinction between “bearing false witness” and “denigrating entire nations.” Those are, in fact, indistinct. Trump’s remarks about “shithole” countries, or about all Africans living in huts, or all Haitians being diseased, aren’t merely “denigrating,” they’re false. When he says these things he is literally “bearing false witness against his neighbors.” And those statements violate that commandment* more directly than some of Trump’s many, many, many, many, many other well-documented falsehoods, such as when he repeatedly insists that he “never said” something he just said, moments earlier, on videotape. 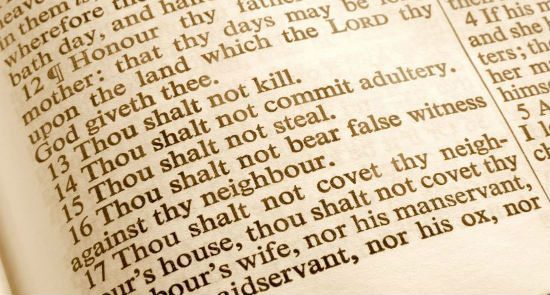 We’ve been taught to think of that commandment — “Thou shalt not bear false witness against thy neighbor” — as simply a prohibition against lying. Thus we often do what the USA Today editorial board does — using “bears false witness” as a synonym for “lies.”

But that’s not quite right.

The distinction here is important — and it can be quite useful for newspapers and others in journalism. Journalists are usually reluctant to say that anyone is “lying.” Why? Because lying involves malicious intent, and intent is supposedly harder to prove. The intent of another person is often regarded as an ineffable, inscrutable, impenetrable mystery. (Good journalists know that it’s not. If you want to know what someone’s intent was, just ask them. And keep asking, until you get either an answer or such a stubborn refusal to answer that allows for the same conclusion.)

But if this distinction might be welcome to journalists, it’s distinctly less welcome for many Christians, who find it bewildering and terrifying because it doesn’t fit with the individualistic way they’ve been taught to think about sin.

Violation of this commandment does not require such explicit malicious intent. We violate it when we bear false witness — when we carry it and pass it along. And that applies even if we bear this false witness ignorantly and thus, we like to imagine, “innocently.”

This misunderstanding — this refusal to recognize sin as something we’re in beyond our discreet, conscious, deliberate choices — is a big part of why we’re so very bad at dealing with and thinking about so many of the sins that shape our lives, whether that be racism, or any other form of bigotry, or almost anything involving money.

Some sin and some sins do involve a deliberate, conscious, malicious choosing. Lying, in this form, is also condemned repeatedly in the Bible. But “Thou shalt not bear false witness against thy neighbor” involves and requires forms of complicity and responsibility (and grace) that go beyond what we see in the less burdensome reformulation “Thou shalt not deliberate state falsehoods with the intent to deceive.”

When we bear witness against a neighbor we incur the responsibility to ensure that this witness is true. We may do all of our due diligence and still wind up ourselves deceived or mistaken, thereby finding ourselves bearing false witness without ever intending to do so. That’s still a violation of the commandment. That’s still a sin.

If that seems unfair to you, think of how it looks to that unjustly witnessed-against neighbor. Indignantly protesting that it seems unfair to think we might sin “innocently” gives too much credit to our alleged innocence in such cases, which is almost never 100-percent pure. When we bear witness against others that we “didn’t know” was false it’s often because we didn’t bother to know, or because we didn’t want to know, or because we were so excited about sharing this scoop that we momentarily forgot about anything else, or due to “a determination to cling to the first story for the sheer pleasure of thinking [our] enemies are as bad as possible.” So this protestation against the commandment’s condemnation of “innocent” sin tends to overstate the case.

But let’s stipulate that there is a perfect scenario of pure innocence and 100-percent pure motive possible here, at least theoretically. What if — despite laborious, painstaking diligence on my part, and the very best of good intentions — I nonetheless wind up deceived by multiple sources, wholeheartedly believing their false witness and then, in turn, passing it on to others? Am I really still guilty of “sin”? Am I really still guilty of violating this prohibition from the hallowed Ten Commandments?

Yep, I sure am. I am still doing wrong to a neighbor, and therefore not fulfilling the law.

I am thus obliged to repent of that sin, to do all in my power to make it right — correcting the false witness I unwittingly spread. I am still obliged to seek forgiveness for this sin from God, from the neighbors I have falsely accused, and from all who may have been deceived by me. In the unlikely circumstances of this blessed hypothetical, that may all be somewhat easier to do than it otherwise would be in the more normal, more human circumstances in which I was acting less responsibly and more maliciously, but all of that will still need to be done.

That remains true even if — due to my hypothetical pure heart and earnestly mistaken ignorance — I never even realize my error. (That strains our hypothetical a bit more, since it would involve my never noticing — never listening to or caring to listen to — how the neighbors against whom I’ve unwittingly borne false witness respond.)

If this kind of responsibility and inescapable complicity strikes you as a daunting understanding of what “sin” involves, then good — you’re getting it. This is why grace is necessary. But we can’t begin to understand either sin or grace if we imagine that they entail only discreet individual choices deliberately made due to fully conscious evil intent.

(This is where my Reformed friends would segue into a Calvinist sermon. I’m coming at this from more of a Niebuhr/Bonhoeffer angle — or even a Rauschenbusch-tempered-by-Niebuhr angle. So I won’t do that here.)

* Those statements also violate the first commandment, which is often misleadingly truncated into “Thou shalt have no other Gods before me.” That’s only the second half of the sentence, ignoring the all-important first half of it, which clarifies who this God is that’s talking: “I am the Lord your God, who brought you out of the land of Egypt, out of the house of slavery; you shall have no other gods before me.” We are commanded to have no other god than the God of refugees and of liberated slaves. Any god who is not that God is a false god.