Stupid or Evil? vs. The Storm

So I was thinking about the bonkers right-wing conspiracy theory called “The Storm,” running through the usual stages of the Stupid or Evil? game in my head. And that’s when it hit me: What if “The Storm” was, itself, just a session of Stupid or Evil? that wound up going viral and getting way out of hand?

SoE? isn’t a formal, structured game. It falls somewhere in between barstool pastime and classroom thought experiment. It’s partly a way of thumbing one’s nose at the civility police — with both thumbs. First by cheerfully embracing two terms — “Stupid” and “Evil” — that they bemoan with elaborate lamentation, and second by playfully demonstrating how their misapprehension of civility leads them to a realm of absurdity. (And thus underscoring how that costs us all, dearly, by surrendering the playing field to those who enthusiastically act in bad faith.)

Again, that misapprehension is the problem here with the civility police. It’s not that their concern with civility is wrong, but that they misunderstand it, and therefore misapply it, and therefore twist themselves into knots by refusing to acknowledge necessary conclusions. They’ve gotten so obsessed with avoiding jumping to conclusions that they’ve created and enforced a false duty to jump away from conclusions.

The results of that eventually become so over-the-top absurd that they would be hilarious if they weren’t also so harmfully consequential.

Stupid or Evil? is, in part, a parody of that absurdity. Consider a given action that is most easily and obviously attributed to either ignorance or malice, then forbid ignorance and malice as possible explanations for it. Lock Occam’s razor* safely behind glass and determine that the simplest, clearest and most parsimonious explanation is impermissible. The exercise thus becomes something like an inversion or perversion of that famous line from Sherlock Holmes: When you have eliminated the probable, whatever remains, however impossible, must be the “civil” conclusion.

More plainly, what the game does is say: OK, how can we explain this person’s actions without recourse to ignorance/stupidity or to malice/evil? Let’s explore every other possible explanation — every one, refusing to rule out any other remotely possible scenario. It doesn’t matter if the only possible remaining explanations are elaborate, massive, or outlandishly far-fetched.

Then you just let it rip. Every variable and fact and factor pointing inexorably in the direction of the forbidden conclusions of stupid and/or evil has to be accounted for by some other means, however unlikely. If this requires piling coincidence on coincidence, then so be it. If it requires positing the existence of a conspiracy so vast and comprehensive that the conspirators outnumber the rest of the populace, that too must be allowed if it’s the only way to avoid the otherwise unavoidable prohibited categories. Be as creative and as outside-the-box as you like. 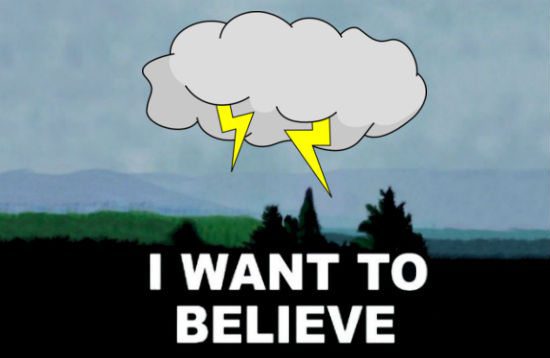 At some point, usually, this exercise reaches a level of absurdity that becomes impossible to sustain. You may finally succeed in covering all the bases and accounting for all the variables, but the only way you’ve found to do that is, literally, laughable. And so, laughing, and having demonstrated that you’ve exhausted every other possibility and given them a more than fair shot, you can safely return to the forbidden conclusions as all that plausibly remains: Stupid or evil?

But what if, instead, you embraced your own absurd construction? What if you decided this wildly implausible stew of conspiracies, coincidences, and unsupported leaps of logic was the actual “secret” truth that explained actions otherwise inexplicable except as due to ignorance and malice?

That’s where I think this wild and crazy grand conspiracy theory “The Storm” comes from. The premise comes right out of Simple or Evil? Consider President Donald Trump, his public statements and decisions and actions. All of them, collectively. Attempt to explain them without allowing either stupidity or evil as possibilities.

This would, I would guess, be easier if one were a little bit drunk and more than a little bit high, but that’s not out of character for the wash-out nihilists of the sub-basement sub-reddits where this conspiracy was first invented and promoted. I imagine it went something like this:

“No, dude, no. What if Trump’s actually, like, a genius. What if he’s actually good and smart and secretly working with Robert Mueller to save the world!”

That’s a challenge. A bar bet. A writing prompt. It is, in part, an exercise in creativity — that’s what would have made it fun and not a wholly Bad Thing, just so long as it had been kept within that context.

The flamboyant, elaborate, hilariously implausible scenario required to meet the criteria of that challenge is, in the abstract, a commendably imaginative piece of alternate-world-building. I go back and forth on the Warnke-esque over-reliance on Satanic baby-killers, cranked up to 11. Part of me thinks that’s just lazy writing, but then I’m also inclined to respect the instinct to stick with the classics. In the abstract, and taken as a whole, it is an impressive act of imagination.

This wild creation might have been put to good use. It might have been presented as what it actually is — an extravagant reductio ad absurdam argument that demonstrates, that proves, the utter futility of any attempt to interpret Trump as anything other than stupid and evil. The writers of this delirious fever-dream could have shared their concoction honestly, presenting it as what it actually is and confronting Trump-defenders with a devastating bit of if/then logic. If you want to say that Donald Trump is a good man and a smart man whose actions are neither stupid nor evil, then you must also accept all of this, too, because only this — this ridiculous and absurdly implausible conspiracy theory — would allow that belief to be true.

But these nihilistic little prank-callers, being just that, couldn’t resist putting their creation to other, perverse uses. They saw it as an opportunity to do their favorite thing — messing with “normies” (their contemptuous, condescending term for everyone they regard as less intelligent or less valuable than themselves, i.e., for everyone who is not them). Having met the initial challenge, they upped the ante: “Dude, I bet we could get a bunch of people to believe this stuff was all true. That’d be, like, hilarious!”

And so they presented their concoction as a series of supposed “leaks” and dark hints from a fictitious highly placed insider in the Trump administration and/or inside the Mueller investigation (according to this theory, those are the same thing). And they managed to convince thousands of credulous “normies” to swallow the whole thing, hook, line, and sinker. That turned out to be easier than they likely ever dreamed because, after all, their target audience desperately wanted to believe that the president on whom they’ve staked their own credibility might somehow be believed to be credible. They needed to believe that they hadn’t put their faith in someone who was acting in bad faith, and so they were eager to latch onto any theory — no matter how unlikely — that would allow them to continue believing that.

Aided by an army of bots and trolls on social media, the crazed scenario has spread like wildfire. It has been embraced by the court evangelicals and INC prophets of the religious right and amplified by the true believers of the so-called “Freedom Caucus” in Congress itself. What started as a half-baked bull-session by some fully baked aging adolescents wound up dominating the news for the past couple of weeks after it was adopted by the majority party’s ranking member of the House Intelligence Committee. (Devin Nunes: Stupid or Evil? Neither! But only if you believe something as psychedelically elaborate as “The Storm.” Otherwise, pretty clearly, both.)

The whole phenomenon demonstrates the power of malice and ignorance, and of weaponized bad faith. That power is largely unchecked these days thanks to the timidity of the civility police and other Very Serious People who continue to mistakenly believe that never presuming bad faith means never allowing ourselves to acknowledge its undeniable presence.

* This logical precept, or guideline, takes its name from William of Ockham, a 14th-century Franciscan friar and theologian. The church honors William by steadfastly refusing to grant him sainthood. Canonization, you see, requires the attribution of miracles due to the intervention of the saint, and those miraculous occurrences have to be substantiated. Since any given claim of a miracle attributed to William of Ockham might also be explained by some other means that makes fewer assumptions, it would dishonor William to violate his own principle by accepting the validity of said miracles.

Thus the only way to honor William properly is to refuse to grant him sainthood, which the church has done. So, well done church. May the blessed memory of William of Ockham continue to be honored by never allowing him to be designated a saint.

February 7, 2018 'Bearing false witness' is not a synonym for 'lying'
Recent Comments
0 | Leave a Comment
Browse Our Archives
get the latest from
slacktivist
Sign up for our newsletter
POPULAR AT PATHEOS Progressive Christian
1