Paris Martineau takes a deep dive through the looking glass into the strange world of far-right conspiracy theories: “The Storm Is the New Pizzagate — Only Worse.” It’s a completely bonkers attempt at a Grand Unified Theory of Trump Vs. Satanic Baby-Killers, and it’s beyond tin-foil hat territory.

Martineau’s report patiently works through the details and history of this bizarre nonsense, piecing together all the dark hints and insinuations to provide an outline of the full conspiracy. That outline has to be pieced together because the promoters of this weirdness — shrewdly — realized it would be scarier and more effective if they avoided a straightforward presentation of the whole thing in a clear, accessible form. You don’t show the shark at the beginning of the movie, after all. Presenting the theory piecemeal, in drips and drops and “clues” engaged their followers, rewarding them with the emotional pleasure of imagining that putting it all together proved they were smart — smarter than all those sheeple and normies.

That keeps these followers hooked, because if putting it all together proves they’re smarter-than and better-than, then allowing themselves to doubt it or to take it all apart would seem to suggest the opposite. And that’s an unacceptable, intolerable idea. 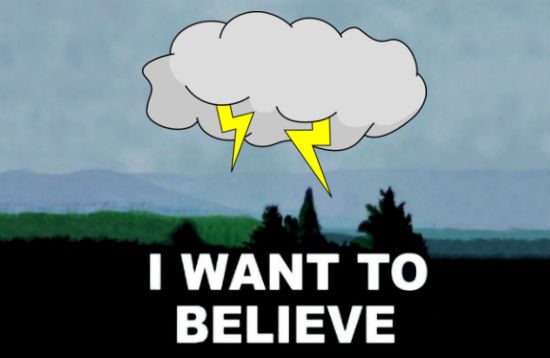 For a shorter, pithier introduction to the bananas folklore of The Storm, let me commend this, from Kyle Mantyla:

“The Storm” is a fringe right-wing conspiracy theory that asserts that an anonymous 8chan forum board poster known only as “QAnon” is actually a high-ranking official within the Trump administration — or possibly even Trump himself — who is slowly leaking out clues about the fact that Robert Mueller’s investigation into Russian interference in the 2016 election is really a cover for an effort to prosecute thousands of powerful celebrities, politicians, business executives and members of the “deep state” for being part of a global ring of cannibalistic satanic pedophiles.

Like all Satanic baby-killer folklore, The Storm adds a bit of flair to embellish the stock image of superlative evil. These human-sacrificing Satanic-cult baby-killers also engage in cannibalism. They don’t just kill babies for Satan, they also eat them, ritually, and also, of course, for Satan.

That’s the thing about whackjob fringe conspiracy theories — they tend to migrate into the real world where they have a real influence on real people, even on those who have never heard of a place like 8chan. “Pizzagate” wasn’t widely believed by most mainstream conservatives, but yet all those reasonable, respectable people somehow came away with the idea that there must be something harmful and devious exposed in all of those boringly mundane emails hacked from the DNC. Their reasonable respectability didn’t insulate them from absorbing the idea that the FBI might be closing in on arresting Hillary Clinton because of John Podesta’s recipe for creamy risotto.

Or consider that Mantyla’s summary of The Storm above comes from his report on Jerome Corsi — the man who gave us the “Swiftboating” of John Kerry. That, too, was a completely bonkers, far-right fringe conspiracy theory, wholly disproved by the publicly available, documented facts of the matter — an ugly slur that left the United States Navy frustrated and bewildered that its authoritative debunking of this brazenly ridiculous falsehood didn’t seem to matter. But while “Swiftboat Truthers” were far-right, absurd-fringe conspiracy theorists, they were also largely responsible for George W. Bush getting re-elected and thus for the lasting, global damage inflicted during his second term.

Jerome Corsi is now actively and ardently pushing The Storm nonsense from his new post at Alex Jones’ InfoWars circus.

Who else is promoting this? How about Operation Rescue?

You might think this would all be a little off brand for Operation Rescue, the radical anti-abortion protest group, but the group’s senior vice president, Cheryl Sullenger, doesn’t seem to think so. Sullenger has now authored two posts for the group’s website that draw attention to posts by QAnon, while never explicitly endorsing the conspiracy theories surrounding the account.

Earlier this month, Sullenger was delighted to discover that QAnon had posted a message about a reported Justice Department investigation into unproven allegations—which originated in part with Operation Rescue—about Planned Parenthood’s fetal tissue donation practices. Even while gently mocking the “conspiracy theorists” who “are having a hay-day thanks to ‘Qanon,’” Sullenger examined the “clues” left in the poster’s message about Planned Parenthood. She tacked on a statement from Operation Rescue president Troy Newman thanking “Q and the Trump Administration” for bringing attention to the issue:

“We are grateful to Q and the Trump Administration for taking the evidence against Planned Parenthood seriously and bringing it to the attention of an audience that may otherwise never have been exposed to the truth. We hope the Qanon exposure helps wake up Americans to the barbarity of abortion,” said Newman. “Planned Parenthood is a corrupt enterprise that makes their money off the backs of dead babies and taxpayers. We urge Congress to defund Planned Parenthood immediately, and are praying for their speedy prosecution.”

Then, today, Sullenger was back with more news from 8chan, reporting that QAnon is urging its followers to unleash a tweet storm to support President Trump’s “Fake News Awards” tomorrow. … “Whether you believe the Q posts are legitimate intelligence being leaked to the people from the highest levels, or whether you think Q is a LARP (live action role play), it doesn’t really matter,” she concluded, saying that the real victims of the mainstream media are the babies.

You know — the “babies” being killed by the Satanic baby-killers. Sullenger is opportunistically agnostic about the entire veracity of The Storm, but she’s enthusiastically backing 8chan for enthusiastically backing her own conspiracy theory — the one created by Operation Rescue’s funding of a James O’Keefe “sting” that dishonestly edited videos to create the false claim of a “black market” in “baby” parts.

Those videos were widely reported on and widely unwatched — the reporting was based on Operation Rescue’s own, inaccurate and misleading description of what they purportedly showed.  This produced great alarm and stern condemnation from mainstream white evangelical leaders who had previously distrusted Operation Rescue as an outrageous fringe group. It may seem like those videos had little lasting impact beyond the criminal charges eventually brought against those who produced them, but the brouhaha — based entirely on the lies of far-right fringe conspiracy theories — resulted in the mainstreaming of Operation Rescue with the previously skeptical white evangelical mainstream.

That means that Cheryl Sullenger and Troy Newman are now treated as credible religious leaders by their fellow white evangelicals — even as they rally behind the newest variation of Satanic baby-killer panic as recycled in The Storm.

What about the less-mainstream, and larger, contingent of white evangelicalism? Well, Steve Strang — the right-wing media mogul behind Charisma magazine and the Weekly World Charismanews site — just hosted “firefighter prophet” Mark Taylor on his podcast, providing a platform for Taylor to promote The Storm to Strang’s followers.

Strang is basically the American Pope of INC (Independent Network Charismatic) Christianity, and he’s giving his papal imprimatur to The Storm. So now we have tens of millions of American Christians taking their spiritual guidance from the anonymous racist and misogynist trolls of 8chan.

I would humbly suggest that this is not a healthy development for the church or for the country.

This would be a disastrous development for white evangelicalism, but I’m not sure we’ll see much of a change. After all, that strain of American Protestantism has been shaped and deformed by Satanic baby-killer nonsense for more than 30 years now, and they’d already mostly decided to anoint Donald Trump as their hero in this fantasy battle. The Storm is just the latest expression of that.

January 17, 2018 We have violent rivers that nobody goes near
Recent Comments
0 | Leave a Comment
Browse Our Archives
Related posts from slacktivist