I Want To Love, But It Comes Out Wrong

• This piece of big-picture/small-picture reporting from Patton Dodd is both inspiring and depressing — sometimes in the same breath: “Low-Income Communities Are Struggling to Support Churches.”

Most church startups, known as “church plants,” do not happen in neighborhoods like this one. San Antonio’s West Side, a colorful, historic Mexican American community adjacent to downtown, has for generations been a distressed area, with high rates of poverty, joblessness, and high-school dropouts. While that description may make it sound like the kind of place faith leaders would target, church planters tend to focus their efforts on areas that are higher-income.

• A wise remark from the great Terry Pratchett recently recirculated on Twitter, prompting some worthy discussion: “Satire is meant to ridicule power. If you are laughing at people who are hurting, it’s not satire, it’s bullying.”

That’s good, and mostly right, I think. But it’s also important to remember that, as Michael Stipe said, everybody hurts. Even people in power. Even people who abuse power — people who sought power in order to abuse it. Hurting people who acquire power tend to, in turn, hurt other people.

Our first obligation toward such people is to use whatever power we have to stop them from hurting others — and satire is one of the tools available for that duty. But even though we must resist them in their capacity as the current flesh-and-blood embodiment of the authorities and the the cosmic powers of this present darkness and the spiritual forces of evil, we have to also remember that our enemies are not blood and flesh. Those people hurting other people are also people, and often also hurting. That shouldn’t shield them from satire or from any of the other tools of resistance, and it doesn’t mean that our punching-up against them becomes bullying. But it’s another facet of the truth.

I think the people who contributed the Roy Cohn panel of the AIDS Quilt (via Dan Kois on Twitter) got this right: 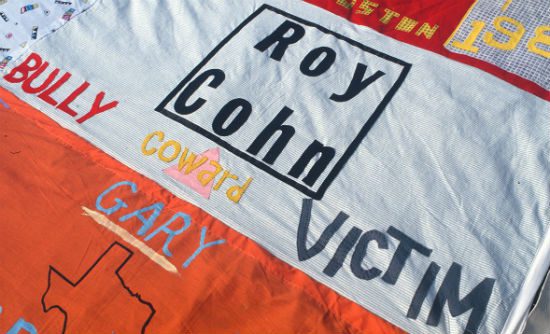 • From the first-ever profile of Donald Trump in The New York Times, by Judy Klemerud, November 1, 1976, “Donald Trump, Real Estate Promoter, Builds Image as He Buys Buildings” (via AZspot):

He is tall, lean and blond, with dazzling white teeth, and he looks ever so much like Robert Redford. He rides around town in a chauffeured silver Cadillac with his initials, DJT, on the plates. He dates slinky fashion models, belongs to the most elegant clubs and, at only 30 years of age, estimates that he is worth “more than $200 million.”

From Left Behind: A Novel of the Earth’s Last Days, by Tim LaHaye and Jerry Jenkins, page 114:

Rayford glanced at the photo of the young Carpathia, a strikingly handsome blond who looked not unlike a young Robert Redford.

The young Robert Redford reference was useful and obvious for anyone describing a young, blond Antichrist in the late 20th Century. Here in 2018, we have so many other options. We could say he looked “not unlike a young Brad Pitt,” or “ever so much like one of the Chrises.” Writers really wanting to freshen up their imagery, though, could go for something more dramatic — a dark-haired Antichrist, who looks ever so much not unlike a young Burt Reynolds.

• Alvin McEwen takes a moment to enjoy revisiting an infamous scary ad from 2009, the campy “Gathering Storm” ad from the National Organization for Marriage. “It’s hard to believe that it’s been eight years since the ad premiered,” McEwen writes. “But is it wonderful to watch it again knowing that NOM and its fight to keep marriage from us failed miserably.”

Yep. We talked about that ad here back then in a couple of posts: “One cheer for Fred Phelps,” and “The burkha-logic of NOM.” (In retrospect, given the enduring ugliness of American Islamophobia, I wish I’d reached for a different analogy in that latter post.)

But even though NOM’s sky-is-falling language hasn’t aged well, and none of their dire predictions came to pass, remember that they and others like them haven’t given up. They elected Trump in the hopes that Not-Garland and maybe another 38-year-old Federalist Society drone or two will rewrite the Constitution to enshrine their weird obsession into law. Nothing right now is settled.

• I’m going to need to read Kevin Young’s Bunk: The Rise of Hoaxes, Humbug, Plagiarists, Phonies, Post-Facts, and Fake News. Here’s Young from an interview with The Rumpus:

I realized the hoax and race in our modern sense both came about at the same time. I came to understand that not as accident, and I became able to think about what we choose to believe about each other that is patently untrue

• Smithereens frontman Pat DiNizio died last month at the too-young age of 62. Here’s one of my favorites from the Jersey band, featuring a bass riff for the ages.

January 16, 2018 Stormtroopers
Recent Comments
0 | Leave a Comment
Browse Our Archives
get the latest from
slacktivist
Sign up for our newsletter
POPULAR AT PATHEOS Progressive Christian
1