Benjamin Kelly seems to be a true believer. He was, until yesterday, a longtime legislative aide for Republican state lawmakers in Florida, a man trusted for advice and expert analysis, and a man whose official duties apparently included speaking to the press and the public on behalf of Rep. Shawn Harrison, R-Tampa. Kelly was a political professional and a professional politician.

But he is also a true believer. So yesterday, when speaking to a reporter from The Tampa Bay Times, Kelly wasn’t just feinting in the general direction of full-gonzo Alex-Jones fever dreams in order to create an insulating fog to shield his boss from the repercussions of an odious, unpopular vote. Nor was Kelly clumsily overstating a dog-whistle meant to shore up support from the true-believer faction of his boss’s political base. Benjamin Kelly was telling the reporter — voluntarily, on the record — what he really believes.

And what Benjamin Kelly apparently really believes is that the Valentine’s Day massacre at a Florida high school last week was staged by a leftist conspiracy as a “false-flag” incident using Hollywood special effects and intended to drum up public support for the confiscation of all guns. Kelly is, it seems, a “Sandy Hook truther” and thus now also a “Parkland truther,” and thus he concludes that all of the children who survived that attack at Stoneman Douglas are not high school students at all, but Soros-[Jew]-funded “crisis actors” playing a role on behalf of the conspiracy to create a One World Government.

This is unhinged, irrational, and easily, refuted. It is conclusively false. But it is, nonetheless, what professional politician and longtime Republican legislative assistant Benjamin Kelly believes.

An aide to state Rep. Shawn Harrison, R-Tampa, Benjamin Kelly, sent an email to Alex Leary saying: “Both kids in the picture are not students here but actors that travel to various crisis when they happen.” Asked for backup to that claim, Kelly sent another email with a link to a YouTube conspiracy video about one of the students.

“There is a clip on you tube that shows Mr. Hogg out in California. (I guess he transferred?),” Kelly’s email read.

Note the indignantly sarcastic tone here — “I guess he transferred?” Kelly genuinely regards the conspiracy links and 4chan fabrications he provided the reporter as proof. He’s not doing some delicate dance of three-steps-removed, “some people say” prevarication to try to exploit these delirious absurdities in the hopes that they will undermine the powerful testimony of these children. He truly believes those delirious absurdities and doubles down on them, publicly and officially, to a reporter, while high-fiving himself and doing a little Aw, yeah! Check-mate, loser! victory dance. 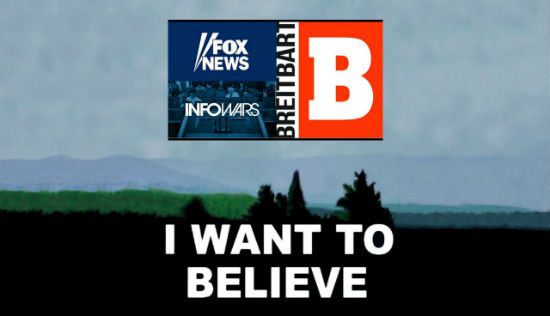 The 4chan and 8chan mischief-makers busily photoshopping and fabricating the “evidence” Kelly cites are perverse nihilists who take delight in duping gullible “normies.” Kelly’s boss, Rep. Harrison, is a politician who relies on those dupes for the electoral arithmetic that gets him to 50.01 percent and allows him to keep collecting cash for doing the bidding of the gun-manufacturers to whom he is a willing captive. Harrison exploits and manipulates those true believers as a means to political power.

But Benjamin Kelly is, himself, a true believer.

We need to be careful, though, about that phrase: true believer. It does not, in this sense, entail that Kelly actually believes these impossible conspiracy theories to be “true.” True and false are not meaningful categories for people like Kelly. They’re not what concerns him.

Kelly, in other words, is a “true believer” not because he wholeheartedly, sincerely and genuinely, believes that this conspiracy theory is what really happened. That would be impossible, even for someone as far gone as Kelly. At some level even he knows this is not what really happened. Even Alex Jones knows that, and Bryan Fischer, and all of their most-devoted fans and followers. They all, at some inescapable nagging level, know that their nonsense is nonsense and not at all the facts of the matter, not at all what really happened.

“Reality is harsh to the feet of shadows.”

See also: “The unwitting: The Trump supporters used by Russia.”