Billy Graham, the unofficial pope of white evangelical Christianity, has died at the age of 99.

Throughout his many years of public ministry, Graham preached to live audiences totaling in the millions, with many millions more watching live broadcasts of his unfortunately named evangelistic “crusades.” It is said that Graham “reached” more people than any other evangelist.

And that means we have to talk about Franklin. Graham’s son, the heir of his spiritual (and financial) kingdom, is an ugly piece of work. Franklin Graham is one of the most viciously and enthusiastically hateful people in American public life — and the competition for that distinction is notably fierce. Take any outrageously hateful statement from Donald Trump and you will find its equivalent made by Franklin Graham years earlier.

So did Billy Graham “reach” his own son? Is Franklin Graham a convert of his father’s gospel?

I think he is. Yes, Graham fils is radically different in tone and in emphasis from Graham père, which is why I often refer to him as Franklin Hophni Phineas Graham (look it up). And I’ve often posted these two covers from the Billy Graham Evangelistic Association’s magazine to illustrate that difference: 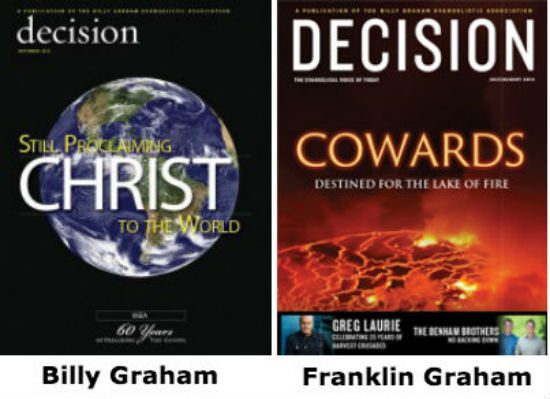 Where Billy spoke cheerfully of “proclaiming Christ to the world,” Franklin cackles gleefully about “Cowards destined for the lake of fire.” That progression isn’t pretty, but there’s a kind of logic to it. Billy devoted his life to proclamation evangelism because he believed that non-Christians were doomed to eternal conscious torment in Hell if they didn’t pray the prayer of salvation. Franklin heard that message his whole life. He absorbed it. He learned what it taught him about the character of God and he learned what it taught him about the character of all those unsaved souls. These people — the unsaved, the un-Christian — deserved Hell. They deserved the worst possible torment imaginable. Forever. How could that not mean that they are utterly despicable and undeserving of love?

The folklore/doctrine of Hell is a hell of a drug.

And Billy’s otherworldly, inconsequential gospel of hollow conversion — of conversion to nothing more than the claim of having been converted — offered Franklin no antidote to the lessons he was learning about the nature of God and the nature of his damnable neighbors.

Throughout his life, Billy Graham was often — very often — challenged as to why he had so little to say about what Jesus called the “weightier matter” of justice. Graham’s response was always the same — that justice could only come from individual conversion. Once people got saved, they would begin to bring about justice. Changed people would, in turn, change the world.

He never had a good answer to the obvious follow-up question: Why should conversion mean that for them when it doesn’t even mean it for you? Why is there so very little evidence of these “changed people” changing anything?

Many of the tributes to Billy Graham now flowing forth emphasize that he wasn’t nearly as bad as the current crop of vocal representatives of white evangelicalism. That is undoubtedly true, even if it’s also pretty much the definition of damning with faint praise. The assumption of such fond remembrances of Graham’s more genial brand of white evangelicalism is based on the notion that his heirs have broken away from or rejected his legacy. I think we’d be better served by pondering how those heirs, instead, represent the fuller flowering of that legacy — the continuation and development of what he taught and what he showed.

We have more to learn from understanding how Franklin Graham embodies continuity with the substance of his father’s gospel. Otherwise, we’re left with little more than sighing dolefully that we prefer Billy to Franklin. And that leads us to think that we should try to be more like Billy than like Franklin. And if we manage to succeed at that, the end result will be that our own spiritual heirs will look just like his — that our spiritual children will also turn out to be hateful little proto-Trumps like Franklin Graham.

I was going to tag the end of this post with a video clip of Ethel Waters singing “His Eye Is on the Sparrow” at one of Billy’s crusades, but searching for that I found this instead, from Jennifer Holliday.

Follow that with an altar call and I’ll be rushing forward every time.