Only visiting this planet

Gregory Alan Thornbury has turned from writing books about the life and work of Carl F.H. Henry to writing a biography of Larry Norman. That’s a strange turn for an academic career, but there’s a certain logic to it, which becomes clearer when you read Thornbury’s recent Washington Post op-ed: “What evangelicals looked like before they entered the political fray.”

Thornbury’s essay capably covers the partisan transformation of white evangelicalism that started back when I was in junior high:

The public’s impression of evangelicals changed, too. During the ’70s they were seen, at best, as people with trite bumper stickers like “Smile, God Loves You,” and at worst, people who served up Jesus as an answer to things people didn’t see as problems. But in the minds of the new mass media radio and television evangelists, preaching Christ meant choosing sides. “Onward, Christian Soldiers” was not only a favorite hymn but their frequent theme.

Within Christian circles, Hollywood, rock and roll and anything that sounded “liberal” were now the enemy in the minds of the televangelists and their legions of followers. The culture wars proceeded apace, and they kept the faithful mobilized. Subsequent evangelicals didn’t get contracts with secular record labels, as Norman once did. If they did manage to do so, they stayed silent about their religious views. So increasingly evangelicals doubled down on building their own record companies, publishing houses, and increasingly, their own subculture. And the only time they poked their heads above their own wall was to hand out a voter’s guide or endorse a political candidate. By the time University of Virginia sociologist James Davison Hunter coined the term “culture wars” in 1991, the die had been cast. No longer could evangelicals be a part of the cultural mainstream, and eventually they would come to be known in the mind’s eye of the public as little more than the Republican Party, now Donald Trump’s party, for the foreseeable future.

Thornbury is pretty clearly a big fan of the long-haired godfather of “Christian rock,”* and his effort to make Larry Norman a touchstone for the pre- and post-partisan white evangelical subculture seems a bit forced. I think the same argument might’ve worked better if he’d used Carl Henry instead.**

But the subject of Larry Norman ties in neatly with what we’ve been discussing here recently — thanks to Michael Gerson — about the relationship between the transformation of white evangelical politics and white evangelical eschatology. Larry was a premillennial dispensationalist — a Rapture-obsessed, End Times, “Bible prophecy” devotee. 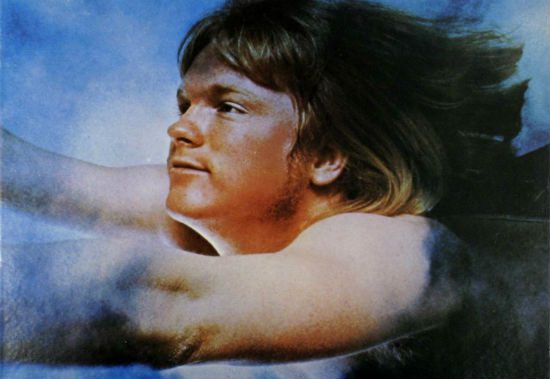 Like most pre-LaHaye Rapture-Christians, Larry Norman was nominally a-political. “What a mess this world is in, I wonder who began it? Don’t ask me, I’m only visiting this planet.”

But this a-political pose wasn’t credible. That’s partly because declaring oneself to be “a-political” is never credible. Carl Henry wanted to avoid partisan politics, so he kept Christianity Today “a-political” and “neutral” during the Civil Rights Movement. Being a by-stander doesn’t mean you’re not taking sides — it means you’re taking whichever side relies on the tacit support of by-standers. As Bishop Tutu put it: “If you are neutral in situations of injustice, you have chosen the side of the oppressor. If an elephant has its foot on the tail of a mouse and you say that you are neutral, the mouse will not appreciate your neutrality.”

More importantly, Norman’s End-Times Rapture obsession fiercely promoted a narrative of decline. The world, he proclaimed and sang, was spiraling toward Armageddon. “It’s all in Revelations, it part of the design / And if you’re truly wise you’ll keep your eyes on Palestine.” The injustices and social ills he rightly railed against in some of his attempted “protest songs” were all just signs of the times, evidence of the inevitable and inexorable downward slide.

This pessimistic premillennialism may be politically fatalistic, but the narrative of decline it reinforces is also a political call to action. And that call is explicitly reactionary. There’s a straight line from “It’s all in Revelations” to “MAGA.”

For an illustration of that trajectory, consider these lyrics from another 20th-century CCM relic:

It’s true, we look to Heaven and our mansions in the sky
And it’s true we’ve got the gaze of eternity in our eyes

But before this church is raptured
There’s no way we’re gonna leave here quiet
We want a righteous invasion of truth
We want a R.I.O.T.***

Yeah, that’s Carman — the novelty-song rock-star, perennial Charisma magazine favorite, and most successful Italian “rapper” ever to come out of Trenton. He’s still a big star in charismatic/Pentecostal/INC circles. The eschatological views of that branch of white evangelicalism are an unholy mess. They love premillennial dispensationalism and the Rapture and the “theology” of Left Behind, but they also — sometimes in the same breath — love postmillennial dominionism and “seven mountains” teaching.

* I haven’t read Thornbury’s biography: Why Should the Devil Have All the Good Music?: Larry Norman and the Perils of Christian Rock. He apparently had access to all of Norman’s copious journals, correspondence, and recordings — offering a more detailed and definitive look at the tormented rocker than we’ve previously gotten. Byron Borger loved it. And Ryan Vlastelica gives it a very positive review at the AV Club:

When it comes to telling the story of an artist, what makes a good biography is not the fame or even the talent of the book’s subject, but the complexity of the figure and how that manifests itself through their life and work. Norman’s story has this in abundance. Why Should The Devil also serves as a primer on Christian rock, a critical analysis of the genre, and a compact history of Christianity in the latter half of last century, a period where Jesus went from a counterculture hero to all outcasts to a cynically deployed tool of the religious right.

But there are two sides to every story, and when it came to Larry Norman, those two sides often broke down into Larry’s side vs. everybody else’s. I suspect I’m a bit more Larry-skeptical than Thornbury is, but it could be that my own fanhood for Randy, Terry, et. al., colors my view the same way I’m suspecting Thornbury’s fanhood for Larry colors his. Anyway, in the interest of balance, you may want to check this out too:

** Henry’s 1947 book The Uneasy Conscience of Modern Fundamentalism was an early, seminal call for white evangelical Christians to become more engaged in society and culture. He lived long enough to see the Monkey’s Paw grant him that wish in the form of the religious right. (I worked for “Evangelicals for Social Action” and can very much relate. When Ron Sider toyed with the idea of changing the group’s name in the 1990s, I suggested “Evangelicals for Social Action — No, Not Like That.”)

For my take on Carl Henry, see: “Five sentences that contain the entire history and explanation of white evangelicalism in America.”

*** This song is in the news at the moment because it was the namesake for the evangelical Bible club in which the now-deceased Austin bomber grew up.

March 23, 2018 LBCF, No. 177: 'Under cover'
Recent Comments
0 | Leave a Comment
"Y'know, I'd love to be the fly on the wall at the conversation those toilet ..."
Matri Sunday favorites
"Heroes in films / books are always absurdly lucky. One solution in a fantasy-type game ..."
Iain Lovejoy It’s a rich man’s game, no ..."
"I never knew that was the context of that song. Glad to do so now."
Iain Lovejoy It’s a rich man’s game, no ..."
"Is "Ducked" the duckduckgo equivalent of "googled"?On the one hand, I like that. On the ..."
Tsotate Sunday favorites
Browse Our Archives
Follow Us!