Steve Benen highlights a disturbing aspect of those polls showing steadfast white evangelical support for Trump. A March PRRI poll found that “69 percent of white evangelicals would prefer Trump, rather than another Republican candidate.” That means, Benen notes:

A variety of evangelical leaders have already made the case publicly that they’re comfortable with a marriage of convenience with the president: so long as he keeps delivering on the religious right’s priorities, the argument goes, the religious right will embrace moral relativism and look the other way on Trump’s personal failings.

But if 69% of these voters prefer Trump to a different Republican – which is to say, someone else who would presumably be just as eager to deliver on conservative Christians’ political goals – it suggests the movement is taking this relationship beyond convenience and actually investing in Trump personally. The polling results suggest they like him, not just what he’s doing for them.

This isn’t a pragmatic bargain based on the potential for anti-abortion court nominees. More than two-thirds of white evangelicals prefer Trump over any other Republican. And I don’t think that’s because they love golf.

So what is it that this landslide-majority of white evangelicals admires about Donald Trump personally? What is it that sets him apart from and above all the rest of his Republican contemporaries?

For the answer to that, let’s turn to Nancy D. Wadsworth’s Vox piece, helpfully titled, “The racial demons that help explain evangelical support for Trump.” Wadsworth suggests that perhaps one reason that a large portion of white evangelicals enthusiastically support a white nationalist and white supremacist president is because — for centuries — a large portion of white evangelicals have always supported white nationalism and white supremacy:

First, evangelical racial history, whether we’re talking about its liberal or conservative branches, is also incomplete without recognition of colonists’ encounters with indigenous nations. The idea that the indigenous people Europeans met upon their arrival were uncivilized “heathens” was anchored in a white Christian worldview, one was employed to justify various forms of missionary conquest.

Only a tiny minority of Christians challenged the many brutal anti–American Indian policies that went hand in hand with the settlement of North America. This racialized history of settler conquest — and the use of theology to justify brutal acts — is ignored by Americans generally, but it represents a distinct blind spot in conservative evangelicals’ tales of their legacy. 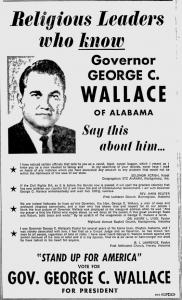 On the question of chattel slavery, evangelicals do not just appear as the abolitionists Gerson cites approvingly. The institution had millions of champions among conservative Christians who drew on Scripture and Curse of Ham theology to defend white supremacy and black subordination. Gerson fails to mention that every major evangelical denomination split along regional lines based on divisions over the slavery question. In fact, the vast bulk of Southern white evangelicals defended slavery, clung to the Lost Cause, fought Reconstruction, and designed and defended Jim Crow.

… Indeed, most politically conservative white evangelicals actively fought every racial inclusion effort from abolitionism to affirmative action. … In fact, it is arguably not the battle to defend Christian schools in the 1970s that launched the modern Christian right — the narrative that evangelicals themselves, including Gerson, embrace — but resistance by Jerry Falwell Sr., Bob Jones, and others to desegregating those schools in the 1960s.

Falwell’s Thomas Road Baptist Church in Lynchburg, Virginia, did not welcome its first black family until 1970. Falwell also hosted the virulently racist presidential aspirant George Wallace on guest pulpits in the South and Midwest in the early 1960s.

,,, Evangelical support for Alabamans George Wallace and, last year, Roy Moore, are bookends of a consistent narrative. With race brought back into view, Moore and Trump are not anomalies. While the nationalist white racial politics of Wallace and Trump may not be explicitly faith-based, in all its forms, it has certainly had no shortage of champions among the white evangelical faithful.

All of this history has shaped white evangelical theology. Every aspect of that theology — hermeneutics, worship, devotion, piety, soteriology, evangelism — was developed to accommodate and to defend white supremacy and white nationalism. That’s a problem for the “19 percent” — for the minority “mainstream” of evangelicalism, the “moderates” and the never-Trumpers and even the “progressive” Red-Letter types. No matter how sincerely they want it to, their theology cannot equip them to challenge the very thing that theology was designed to support.

This is why Gerson’s hagiographic history of 19th-century abolitionist evangelicals can’t work the way he wants it to. It hits the same problem that saturates Donald Dayton’s inspiring little history lesson, Discovering an Evangelical Heritage. Most of the laudable activists and prophets and abolitionists Dayton profiles eventually reach a point where they’re forced to choose between their commitments to justice or their commitments to forms of theology designed to buttress injustice. In the end, most either turn away from evangelical theology or else they turn away from their activism. So Oberlin goes on to become Oberlin and Wheaton goes on to become, well, Wheaton. 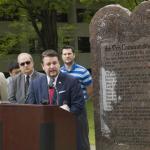 April 27, 2018
Every 'Ten Commandments' is a Sectarian Choice -- An Establishment Of Religion
Next Post