Satanic Panic: We wanted it to be true (and still do)

The name Mike Warnke popped up on Twitter this weekend. He’s not dead, and he’s no longer famous enough for his awful history with women to have resurfaced as a #MeToo situation. But he was, literally, a footnote in an odd relic of a document dredged up by a Florida art teacher.

This is a bona fide police advisory document for public school teachers on the “Identification, Investigation and Understanding of Ritualistic Criminal Behavior.” Or, in other words, Satan. It’s an artifact from the peak of the Satanic Panic of late 20th-century America.

The link there is to a .pdf file of the document, helpfully provided by Jennifer Jordan, sister of that Florida art teacher. Jordan posted the full thing for our edification and enjoyment after she started sharing excerpts on Twitter: “Hoooooooly crap guys. My sister is an art teacher in FLA, and she found this AMAZING document in her supply closet.” Her Twitter thread became a viral sensation — bewildering to some younger readers who struggled to believe this was ever really a thing. 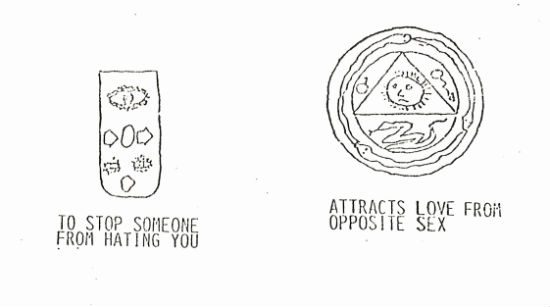 It was. This particular document is from Det. Robert Simandl of the Chicago Police Department, one of many such self-appointed “police experts” in what was then considered a dire public safety emergency. He’s quoted in this October 8, 1987 Star Tribune article, “Satanism Growing Worry For Police“:

But to a growing number of police investigators around the nation, stories of ritual mutilation, blood-letting and sometimes murder are all too real. In seminars and conferences, they have begun to train others to see signs of satanic motives behind otherwise bizarre and inexplicable crimes.

One of the investigators, Robert Simandl, a 20-year veteran of the Chicago Police Department, was in St. Paul, Minn., earlier this month to talk to 150 local police investigators and youth social workers about the clues to satanic and occult crimes.

Simandl, who has been studying cult crimes around the nation for five years, rattles off stories about ritual murders that rock the most seasoned detectives. They are stories of ritual sacrifice, child molestation, grave robberies and teenage suicide.

“It was terrifying,” said Solveig Storhoff, a Ramsey County, Minn., child-protection worker who attended the conference. “I became aware later of what it was I was afraid of: It was the unknown. It was chilling and overwhelming. You don’t want to admit this is going on.”

Assistant Hennepin County (Minn.) Attorney George Widseth said that while he knows of no satanic cults investigated in Minnesota, he’s convinced that cult crime has become a national phenomenon. …

While there are no statistics, enough documented criminal cases involving Satan-worshipers have cropped up around the country in the past five years to lead Simandl and about a dozen other police detectives to begin looking for patterns and links.

While they say they’ve come up with only hints of organized activity, apart from the established 2,500-member Church of Satan based in San Francisco, they are convinced that covens of child molesters around the country practice satanic rites and are in contact with one another.

The document Jordan found is dated February 4, 1989. For reference: This was one year after Geraldo Rivera’s infamous smash-hit TV documentary, Devil Worship: Exposing Satan’s Underground — but still years before it would be exposed as utterly bogus. The McMartin Preschool trial was two years old at that point (and still a year from its conclusion). Fran and Dan Keller hadn’t yet been accused for the non-existent Satanic crimes for which they would end up spending 21 years in prison. The murders for which the West Memphis Three would be falsely convicted wouldn’t take place until four years later. The national frenzy being whipped up by these police experts, and by equally fame-chasing clergy, was just getting started.

Wherever this moral panic spread you would find “experts” reciting the same kind of dire warnings and “danger signs” as those in the weird document that amused and outraged so many this weekend after Jordan posted it on Twitter. And almost all of them built off of the underlying expertise of Mike Warnke, listed in the document above as a key “resource.”

It’s hard to convey how weird that is. Warnke was a stand-up comedian and notorious joke thief who made a fortune in the niche market of the white evangelical subculture. His “Christian comedy” albums became some of the top-selling titles for the new and rapidly growing “Christian”-brand recording industry. Like some of the schlockiest Christian-rock acts of the 1980s, his derivative act benefitted from having an exclusive imprimatur for an evangelical audience that didn’t have permission to listen to the stuff he was borrowing from. Evangelicals weren’t allowed to listen to George Carlin, so Warnke could swipe big chunks of Carlin’s act for his subcultural audience without anyone realizing that’s what he was doing.

Gradually, though, Warnke stumbled onto an act that made him an even bigger star. It wasn’t comedy, exactly, but rather an extravagantly embellished story about his supposed pre-conversion past as a “Satanist.” Mike Warnke wasn’t the first evangelical Christian to spice-up his personal testimony by fabricating some titillating depravity from his “unsaved” past, but he took it to a whole new level. And Christian audiences loved it. The more they loved it, the more he elaborated and embellished it with ever-more extreme claims about his years as a Satanic high-priest in charge of thousands of evil followers, presiding over ritual human sacrifice and blood rites. He wrote it up as a memoir — The Satan Seller — and the book became an even bigger hit than his records.

That book is a major source document for Det. Simandl’s weird document. It would go on to be cited as though it were a legal and academic text by scores of “expert witnesses” in circus trials across the country.

And none of it was true. Warnke made it all up. He was never a Satanist, just an amusing guy who cobbled together scary stories based on bad movies, urban legends, and his own fevered imagination. “They sound like campfire stories,” that Strib article said in 1987. And that’s exactly what they were.

Mike Hertenstein and Jon Trott published the definitive refutation of Warnke in their 1993 book, Selling Satan: The Evangelical Media and the Mike Warnke Scandal. That book was successful, but nothing like the runaway phenomenon of Warnke’s fake memoir years before. They exhaustively documented Warnke’s personal history to prove that he was, in fact, never a Satanist. And that wasn’t hard to do. The truth about Warnke was always there in plain sight, but people preferred not to see it because they preferred to pretend his nightmare was real.

People like Warnke and Robert Simandl are somewhat interesting, but far more interesting is the far greater number of people who made up their eager audience. It’s easy to understand what drove Warnke and Simandl — they made a career out of promoting this stuff. But there wasn’t any money to be made for the audience who bought their message and wanted to hear more. Debunking the lies of the Satanism Sellers is easy, but what of the Satanism Buyers?

They were lying too — lying to themselves and to one another. “You don’t want to admit this is going on,” one person says in that Strib article, but that’s not accurate. Millions of people desperately, desperately wanted this to be “going on.” They wanted it all to be true — the secret covens and high priests and the slaughter of thousands or millions of innocent children in bloody dark rituals.

They loved the idea of it.

And they still do.

Hence “Pizza-gate.” And “The Storm.” And the daily repitilian trolling in comments here about Satanic baby-killing for “convenience.” And the “Planned Parenthood sells baby parts” nonsense recently recited by the governor of Iowa. And the recurring motif of George Soros as bogeyman or, more generally, “Hollywood and media elites.” (That one harkens back to pre-Warnke versions of the same ever-beloved scary story — to the 12th-century Simandls warning that William of Norwich was killed so his blood could be used to make Passover matzos.)

The typewriter-and-overhead-transparency production values of that weird 1989 police advisory can trick us into thinking this is all in the past. It’s not.

The Satanic Panic evolved, but it never ended. It still sells because millions still want to buy it. And that continues to shape American politics and American religion.