Baptist insubordination is an oxymoron

Baptist insubordination is an oxymoron May 9, 2018 Fred Clark

Paige Patterson is almost unanimously revered and respected among Southern Baptists — albeit mainly because he has spent the past several decades purging the SBC of everyone who does not revere and respect him.

His admirers would object to that sentence, insisting that Patterson earned his respect and his beloved status thanks to his role in leading the glorious “conservative resurgence.” But that’s not actually an objection to what I said above, just a restatement of the same thing in different words.

Alas, the same history and qualities that have made Patterson such a towering figure in the current incarnation of the SBC have also meant that he hath not “a good report of them which are without.” That’s from the King James Version, from the qualifications for “bishops” described in 1 Timothy 3 (other translations render this “he must be well thought of by outsiders” or “have a good reputation among outsiders”). Outsiders tend to recoil at Patterson’s long history of statements and actions, especially his statements about and actions toward women.

Beyond his loyal fan base within the Southern Baptist Church*, Patterson comes across as creepy and authoritarian — a man deserving of “reproach” who hath fallen into “the snare of the devil.”

In sermons he gave between 2000 and 2014 that have been made public, Paige Patterson, seminary president and former denominational president, has encouraged women who are abused by their husbands not to divorce but to pray instead. He also commented in the sermons on female bodies, including that of a teenage girl, and women’s appearances.

… The firestorm began less than two weeks ago, when a site called the Baptist Blogger posted a video of Patterson’s sermon from 2000, in which he told a story about a woman who told him she was being abused by her husband. He told her to pray, and she came back with two black eyes. “She said: ‘I hope you’re happy,'” Patterson recalled in the sermon. “And I said, ‘Yes … I’m very happy,'” because her husband had heard her prayers and come to church for the first time the next day.

… Women have highlighted other comments Patterson has made, including one sermon in 2014 in which he described a 16-year-old girl walking by, saying that “she was nice.” One young man commented, “Man, is she built!” Patterson said a woman scolded the young man, and Patterson said he responded, “Ma’am, leave him alone. He’s just being biblical.” The audience laughed.

In a 2013 sermon, Patterson suggested women who have had “a problem in your home” should not bring their case to a judge because it could get in the way of that judge becoming a Christian. “Settle it within the church of God,” he said. “And if you suffer for it, and if you were misused, and if you were abused, and if you’re not represented properly, it’s OK. You can trust it to the God who judges justly.”

… Patterson criticized female seminary students for not doing enough to make themselves pretty, saying, “It shouldn’t be any wonder why some of you don’t get a second look.”

And there’s plenty more where that came from — both of the generally demeaning ickiness and of the dangerously hideous and callous garbage of urging abused women to “submit” to their abusive husbands.

None of this ugliness is particularly surprising given Patterson’s history and the history of the very same “conservative resurgence” that he is credited/blamed for leading:

A former SBC president from 1998 to 2000, Patterson is a giant in the denomination, remembered for his his role in steering the denomination in a more conservative direction after some churches left in the late 1970s to form the more moderate Cooperative Baptist Fellowship. The offshoot allows women to be ordained as pastors.

So the particularities of the recent “firestorm” over Patterson’s remarks aren’t an aberration. They’re an obvious, predictable, logical outcome of the patriarchal ideology Patterson has always championed within the SBC. Patterson’s moist-lipped creepiness and his shrug-emoji indifference to abuse are baked into that and inseparable from it.

Also baked into that ideology is the kind of thin-skinned authoritarian vindictiveness that Paige Patterson has long exhibited and embodied as a Southern Baptist bishop. Ed Stetzer discussed this in his recent column about the SBC’s Patterson Problem:

Patterson is one of the most significant leaders in SBC life, and one who does not often get criticized without the critic receiving significant backlash.

I know this first hand.

In 2008, I first publicly criticized Southwestern for the way certain faculty members were (repeatedly) registering disagreement with the results of our research. That day, several SBC leaders told me it was my last day as an SBC employee. As one son of an SBC entity head told me, “Nobody criticizes Paige Patterson and keeps their job.”

That vindictiveness is reflected throughout Sarah Pulliam Bailey’s article: “The women who wrote the open letter say they tried first to speak to seminary trustees, but felt they had to make their concerns public to be taken seriously, said one woman who works for a high-ranking leader in a Southern Baptist organization and spoke on the condition of anonymity because she feared her participation in organizing the letter could jeopardize her job.”

The bizarro-world detail there is so subtle you might miss it on first reading. It’s the reference to “a high-ranking leader in a Southern Baptist organization.”

This is Paige Patterson’s ultimate legacy — transforming what was once a Baptist convention into a hierarchical denomination. He has replaced soul liberty — the one and basically only Baptist distinctive — with rank. Nothing could be less Baptist. This is the whole thing about Baptists — each of us chooses, for ourselves, to be baptized. And no one else — no Pope or King or bishop or magistrate or seminary president — has any say in that matter.

It ain’t the full-immersion, it’s the choosing. That’s what makes a Baptist a Baptist.

And it’s what makes “high-ranking Baptist” an oxymoron. The priesthood of all believers means exactly that: one rank, no hierarchy.

This is why Paige Patterson is just about the least Baptist person imaginable. He sought to rule, and so he could not abide the inherent unruliness of Baptist polity. And so he transformed that polity, imposing hierarchy and structure and rank. That transformation was both the mechanism for and the substance of Patterson’s “conservative resurgence.” It wasn’t simply about the nominally “conservative” theology that Patterson et. al. sought to impose as the redefinition of Southern Baptist identity, but about their claiming the authority and creating the ability to impose and redefine it.

After the “conservative resurgence,” Southern Baptists found they had rank. And Paige Patterson regards himself as one of the highest-ranking “Baptists” in those ranks. That’s demonstrated, routinely, by his instinct to pull rank as a way of squashing dissent and criticism. This is illustrated in the final paragraph of Bailey’s article:

The seminary fired a PhD student from his $40,000-a-year job as the catering kitchen manager and took away his scholarship for tweeting about the Patterson debate, telling him that he was “indiscreet” and that his decision to speak publicly about the dispute “does not exhibit conduct becoming a follower of Jesus.”

I suppose the president of a seminary does “outrank” the kitchen manager, but this guy wasn’t fired because of some catering mishap. He was fired for insubordination. Patterson seems to think that as president of Southwestern “Baptist” Seminary, he outranks a mere student. That’s wrong. It’s wrong in the same way that it would be wrong for a five-star Army general to imagine that they outrank a civilian. Or for a Catholic cardinal to imagine that he outranks any given Baptist.

Patterson is weirdly obsessed with insubordination, which is ridiculously un-Baptist or even anti-Baptist. “Subordinate” is not a category that any Baptist should recognize as legitimate. We are all, literally, ordinate. The priesthood of all believers. Baptist insubordination is not a possibility except for those anti-Baptist authoritarians, like Paige Patterson, who imagine that it should be.

* Referring to Baptist conventions as a single “church” used to be regarded as an epithet. It’s a convention of freely associating congregations — not a “church” or a “denomination”! But, hey, if it quacks like a hierarchical magisterium … Let’s just call it what it is. 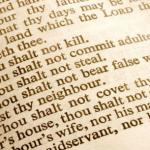 May 10, 2018 Biblical Teaching On Divorce: Start With Ezra
Recent Comments
0 | Leave a Comment
Browse Our Archives
get the latest from
slacktivist
Sign up for our newsletter
POPULAR AT PATHEOS Progressive Christian
1