Romans 13 and the Gettysburg Address

This is a good piece from Robert L. Tsai on “The Anti-Immigration Bible.” Tsai gives a good overview on the way nationalist Christian groups have traditionally used the Bible to support their nationalism, including their tendency to focus — as Jeff Sessions has — on Nehemiah and Ezra. Such “wall-building” enthusiasts rarely point out, as Tsai does, that the stories of Ezra and Nehemiah end in full-blown ethnic cleansing, including mass divorce and family separation.

Ezra was a monster. Worse than Ahab and Jezebel. There’s a reason so much of the rest of the canon goes out of its way — implicitly and explicitly — to reject and condemn the cruelty of Ezra and Nehemiah’s sins there in Sessions’ pet passage.

One quibble with Tsai, and with most of the rest of the reporting on Sessions’ and Sarah Huckabee Sanders’ attempted appropriation of Romans 13 last week. Tsai writes:

Last week Attorney General Jeff Sessions invoked the Bible to justify a policy that has separated nearly 2,000 border-crossing children from their parents in a mere six weeks. Referencing Romans 13, he stated that everyone must “obey the laws of our government, because God has ordained the government for his purposes.”

But note the full enormity of what Sessions is doing there. He’s not just invoking the Bible to justify this one policy, but to justify — as beyond question and beyond criticism — any and every policy. Yes, specifically he’s claiming the divine right to put children in cages, but more than that he’s claiming to be an agent of God and therefore that whatever he does is divine, and that we mere mortals have no choice but to submit and obey.

Apart from his piss-poor theology and his blood-and-soil hermeneutics, there’s another, deeper, problem with the way Sessions invoked this passage. He cited it as being about some entity called “the government,” by which he meant himself — the Trump Administration, politicians in general. This entity, in Sessions’ view, is a thing separate and distinct from — over and above — the rest of us. We’re subjects to the authority of the government. We are accountable to it, not the other way around.

The idea of “the government” that Sessions is asserting — and attempting to sanction with scripture — is not compatible with the idea stated by our greatest Founding Father, Abraham Lincoln, in the Gettysburg Address: “government of the people, by the people, for the people.” 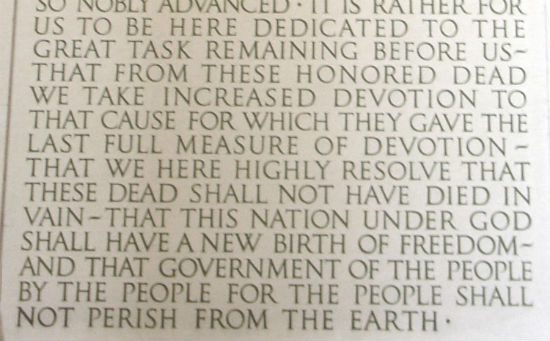 I appreciate that it’s largely viewed as naively idealistic to cite that lovely phrase as anything other than a pipe dream. It’s embarrassingly un-savvy to suggest that it corresponds to anything real or that it could ever be expected to. But this is the ambitious, and necessary idea that has to be asserted and reasserted and continually made more real if we want to live in anything approximating a democracy. The alternative, assumed there in Session’s scriptural grasping at the role of Caesar, is to be subject to the authority of rulers and kings. Nothing serves the Men Who Would Be Kings more than the archly knowing dismissal of the idea of self-government as helplessly naive.

Anyway, my point here is less about American governance than about Christian political thinking, nearly all of which is based on the assumption that “government” is always a matter of kings and rulers and Caesars. This is true not only of reactionary, semi-theocratic theologies, but also of more left-ish, progressive theologies — Anabaptist-y anarchy, Empire criticism, and the like. Whether it regards “The Government” as a divinely ordained ruler or as a beastly oppressor, it tends to present it as some separate entity over there, wholly distinct from us folks over here.

The New Testament writers had a lot to say about our accountability to government — as in both Romans 13 and Revelation 13. Their world did not include the need, or the possibility, of having much to say about government’s accountability to us. But that’s how it’s supposed to work here and now. We don’t have a king or a Caesar, we have us. We are, in this time and place and in this system — however imperfectly realized — the authorities appointed as servants of God to do good.

Otherwise we’re conceding the argument to Jeff Sessions and other would-be rulers claiming a divine right to demand our submission. That will make us accountable to him to obey whatever he tells us about children in cages. We need to turn that around. We need to  demand that he be accountable to us, and that if what he does is wrong he should fear us, for we have authority and we do not bear it in vain.