And his own received him not

This conversation with Matthew Soerens is depressingly familiar. I’m having flashbacks of the seminary basement offices where I worked for an evangelical nonprofit throughout the 1990s. (This is a fine piece by Samuel Smith, but it’s on the browser-seizing, auto-play, anti-reader, click-bait site Christian Post, so beware.)

Soerens is the director of church mobilization for World Relief, the largest nondenominational/white evangelical refugee resettlement agency. His job, in other words, involves working with pastors and congregations to sponsor and resettle families fleeing persecution, war, and oppression. As he notes, this isn’t something that it should take any convincing to get Christian churches to do. But now it is:

“[White evangelical] views on refugees are quite negative and that took us by surprise at World Relief because for the longest time in my career, refugees were like the easy part of our work — they have legal status and they all, by definition, have a sympathetic story of fleeing persecution,” Soerens said. “Other immigrants, especially those who are undocumented, that is where it got controversial. Everybody liked refugees, at least that was kind of our operating assumption. Maybe it was that I was wrong.”

You can hear Soerens cycling through something like the stages of grief that await anyone trying to do this kind of work in this constituency. I recognize the frustration, determination, and perpetual disappointment he expresses. Been there.

The initial idea seemed promising. White evangelicals responded badly to undocumented immigrants — the always loaded evangelical term of art “controversial” is doing a lot of work there. Unpacking that and confronting it directly would likely prompt a fight-or-flight response that could get even uglier. So focus first on the “easy part” — the utterly non-controversial matters that no semi-decent person could ever possibly find objectionable. Let that serve as an introduction to gently raise greater understanding, to cultivate empathy, to educate. That seems like it could work, right?

But that leads to painful disappointment as these constituents find even “the easy part” too hard for them. Refugees may have legal status, may have been thoroughly screened and vetted, and may all have sympathetic stories of fleeing persecution and oppression, but they are not met with sympathy. They are met, instead, with false claims that they are breaking some law or that they pose some kind of threat. (Initially, in Trump’s first-steps travel-ban period, the pretense was that refugees and immigrants posed a threat to national security. Now, arriving at the Tender Age Internment stage, they’re all far more candid about stating that the perceived “threat” is entirely demographic.)

Poor Matt Soerens is disappointed in the people responding this way, but he’s not yet disappointed enough. He hears them repeating these lies, but extends the benefit of the doubt again — insisting that they must be misinformed.

That, again, seems like a reasonable assumption. Those white evangelicals are, after all, being fed a steady stream of misinformation — of lies — from the White House, from Fox News, and from “Christian” media on radio and cable TV. Correcting that misinformation will be a challenge, but Soerens has faith in the power of truth to overcome lies, and he seems to be taking a deep breath and forging ahead to educate and inform these unfortunately misled church folk.

“I used to think that people knew that refugees had been through this comprehensive screening process [to enter the United States],” Soerens told CP. “It is clear that a lot of Americans didn’t know that and maybe are even confusing these categories and don’t understand that a refugee, by definition, has fled persecution and has gone through a vetting process and that they are less than one percent of the refugees globally that the U.S. has invited into the country.”

While it is hard to point out a reason why many Americans might have misconceptions about refugees fleeing persecution in search of peace and safety, Soerens suggests part of the reason might be the fact that Trump has done his part to contribute to those misconceptions.

And that is why he’s headed for a deeper, and even more painful disappointment.

He will, I’m sure, encounter plenty of nice folks who will reward his faith in their good faith. They will be receptive to his credible information and will be grateful for the correction and edification that information provides them. But this group will be far from the majority and far from the norm. Most of those “misinformed” about refugees will not be receptive to the information he seeks to provide them, because “misinformation” was never the cause of their problem.

Warnke was a joke-thieving “Christian comic” turned professional “ex-Satanist” who persuaded millions of white evangelical Christians to believe that America was home to a secret conspiracy of Satan-worshipping cannibals, pedophiles, and murderers. They were, he said, everywhere, hiding in plain sight. The story he told was terrifying and thrilling. He told this story on LPs and in books and on Christian TV. He told it in churches and sold-out concert venues. In the early days of the “Christian rock” recording industry, he became a bigger rock star than any of the actual rock stars.

He kept this up for nearly 20 years before, eventually, a long exposé in Cornerstone magazine laid out all the holes in his story, revealing it to be almost nothing but holes. That story rippled throughout the evangelical media, where it was widely reported that Mike Warnke had been exposed as a fraud.

That’s true — he was a fraud. But it’s not the whole truth. Mike Warnke was such an open, obvious fraud that the millions of white evangelicals who eagerly bought everything he was selling cannot claim to have been innocently defrauded by him. They weren’t tricked into believing his lies; they wanted to believe them. They wanted him to tell them more lies — the stranger, wilder, and more sordid the better.

Nothing about his story added up. It wasn’t merely implausible, it was impossible. And Warnke never offered a shred of evidence to support any of what he was saying. But that didn’t stop his audience from embracing it as a “truth” they claimed to “believe.” The contradictions and chronologies exhaustively catalogued by Cornerstone’s Trott and Hertenstein had all been just sitting there, apparent to anyone who bothered to give them a second glance. But for decades, no one had bothered looking. They had, instead, quickly looked away — actively choosing to pretend not to have seen all the glaringly obvious lies in Warnke’s delirious tall tale.

Christians had not been misinformed by Mike Warnke. They had not been deceived or defrauded by him. They heard him spouting recognizable misinformation, but they chose to accept it anyway because they wanted to, because it flattered them, because it gave them permission to think the worst of others and the best of themselves without costing them anything more than the price of a ticket or an LP.

And when people are voluntarily caught up in lies, education and corrective information won’t work as a solution. People choosing to believe the white nationalist anti-immigrant lies promoted by Trump and by Fox News will not be receptive to the actual facts of the matter. They will regard those facts — and anyone attempting to stand by them — with hostility.

Soerens’ attempts to inform these Christians won’t be perceived by them as the sharing of information. It will be perceived as an attack, as the rescinding of that permission to think the worst of others and therefore the best of themselves. The propaganda they’ve embraced didn’t work because it was credible or convincing. It’s not. It’s about as credible and convincing as Mike Warnke’s tales of being a Satanic high priest. But the propaganda was persuasive to them because it gave them permission.

And it maintains its hold on them because, by accepting that permission, it makes them complicit.

More information will not address the cause of their problem. They’re not misinformed due to a lack of light, but due to an aversion to it — due to a preference for staying in the dark.

This is the crisis we’re in: God-light streamed into the world, but men and women everywhere ran for the darkness. They went for the darkness because they were not really interested in pleasing God. Everyone who makes a practice of doing evil, addicted to denial and illusion, hates God-light and won’t come near it, fearing a painful exposure. But anyone working and living in truth and reality welcomes God-light so the work can be seen for the God-work it is.

That’s John 3:19-21 (in The Message translation). That passage, I think, was the basis for this call from the greatest theologian of the 19th century:

Soerens and the other good people at World Relief are grappling with the dismaying disappointment of realizing that the very same white evangelical Americans they have spent decades educating about the need to minister to immigrants and refugees are the most viscerally and viciously anti-immigrant and anti-refugee group in the country.

I feel for Soerens as I see him working his way through the grief of this, grappling with depression and denial and bargaining as stages of that journey. But that journey must not lead to acceptance.

Enough with the denial, depression and bargaining. This is a time for anger. 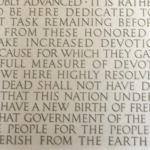 June 21, 2018 And you may say to yourself, 'My God! What have I done?'
Recent Comments
0 | Leave a Comment
Browse Our Archives
Related posts from slacktivist