And you may say to yourself, ‘My God! What have I done?’

The answer to that, by the way, is Yes. Yes, white evangelical Christianity created Scott Pruitt. That has little to do with the use/abuse/enjoy ideology of embezzling stewardship that Beisner et. al. claim as their blasphemous doctrine of “dominion.” It’s about the fact that Scott Pruitt is pervasively, laughably corrupt, yet faces no consequences for that corruption.

Brazen corruption with impunity is Scott Pruitt’s white evangelical distinctive. The formula is simple. When you get caught stealing from the poor box or selling off all the food in the orphanage pantry, just recite the stock talking point: “These people claim to care about orphans and poor children, but unlike us they don’t care about unborn children!” And then you can do anything. Flatter evangelicals by praising them as the heroic, Bonhoeffer-esque champions of unborn “babies” and they will let you loot and plunder forever. That’s all they want to hear. 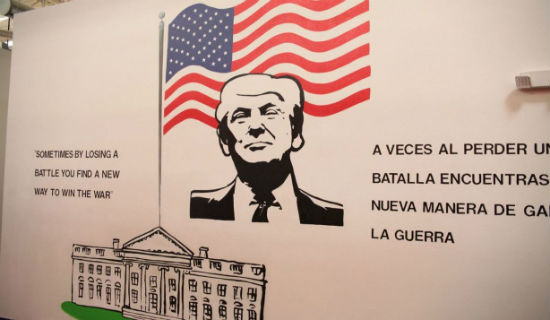 This is one of those things where we might say “Imagine how the Fox News crowd would have responded if President Obama had a creepy propaganda mural of himself painted in an internment camp for children,” except that it’s impossible to imagine Obama doing that.

• Adele M. Stan, “Trump Is Executing a Major Geopolitical Realignment. Does Anybody Care?”

We’re in the grips of a shift in national identity, one in which democracy and adherence to human rights as stated national values (however flawed in their actual execution) are giving way to an acceptance of authoritarian rule. And we’re allowing our country to align itself against the democracies of the world at the hands of a president who is looking more and more every day like a traitor. A president who is helping to fuel the rise of the authoritarian right in Europe.

• Someone murdered Mickey Bryan in 1985. It was almost certainly not her husband, Joe Bryan, even though he was convicted of the crime and has been imprisoned for it ever since.

This case highlights one of the perverse effects of America’s tough-on-crime politics — the one-way ratchet that causes people in government and law-enforcement to bend over backwards to avoid anything that might be portrayed as being “soft” on crime. The result, inevitably, is that actual murderers walk free. Somebody killed Mickey Bryan and that person got away with it because police and prosecutors and politicians were “tough on crime.” That’s what “tough on crime” ideology produces.

• Related: Alan Bean on “Curtis Flowers: the whole world is watching!” Bean has been blogging and shouting about the ugly injustice of this case for years and he’s celebrating the newfound attention coming from the podcast In the Dark and an upcoming Starz documentary. He’s confident that shining a light on this case will reveal the truth: Curtis Flowers was falsely accused and wrongly imprisoned. He should be freed, exonerated, and then cut a Very Large Check by the same Mississippi authorities who have ludicrously prosecuted and persecuted him for all this time.

• The title of this post comes, of course, from Talking Heads’ “Once in a Lifetime.” Open Culture directs our attention to this video featuring David Byrne’s isolated vocals from that song, which is startlingly different yet, still, same as it ever was. Here comes the twister: