Kimberly Daniels is a Trump-loving former exorcist and self-proclaimed “Demon-buster” who managed to get elected to the Florida legislature as a Democrat. She’s also a graduate of an unaccredited “seminary” and the apostle/founder/pope/CEO/sole proprietor of three “ministries,” including an unaccredited Bible college of her own.

Daniels has spoken positively of slavery and dismissively of the Holocaust (which was of no consequence, she said, because “Jews own everything”).

Given such views, Daniels is also, of course, an author with Steve Strang’s “Charisma House,” which has published about a dozen of her books on “spiritual warfare.” And she has become the point-person in Florida’s legislature for the Christian nationalist agenda of “Project Blitz” — introducing legislation to place the words “In God We Trust” on as much government property as possible and, just this month, a bill to require Florida’s public schools to include Bible classes. 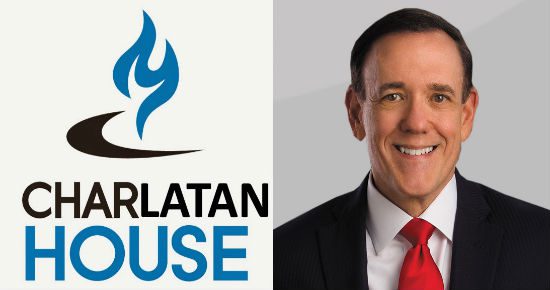 How corrupt? Andrew Pantazi does his best to summarize for The Florida Times-Union, but it’s not easily summarized: “Rep. Kim Daniels willing to say she filed false financial disclosures.”

Once again, state Rep. Kimberly Daniels is willing to admit she broke the law.

Daniels, a Jacksonville Democrat who has repeatedly faced ethics and elections complaints during her eight years in politics, filed an agreement recently with the state that she would confess to filing false financial disclosures. …

Daniels is perhaps the most conservative Democrat in the Legislature and has been a friend to Republicans in her anti-abortion advocacy and support for religious liberty. She authored a law that guaranteed students could express religious views at school, including by praying before, during and after class. Her most recent bill would require every public school to offer a class on the “objective study of the Bible.”

But ever since her time on Jacksonville City Council, she has also sparked ethics complaints. She previously agreed to pay a $1,500 fine related to a 2015 Florida Election Commission complaint that she illegally used campaign funds on personal expenses. In that case, she agreed that the commission could prove the facts. …

[The most-recent ethics complaints are] based on reporting by The Florida Times-Union that showed Daniels, who pastors a church, shuffled properties and time-shares to her nonprofit ministry and didn’t disclose $1 million in debt owed on a Broward County home. Her disclosures listed no properties or mortgage debt during her years on Jacksonville City Council.

The commission’s investigation listed a number of findings about assets and debts, including the fact that Daniels owned a Jacksonville home but didn’t list it as an asset and she didn’t list its mortgage as a debt.

The commission’s investigation found that Daniels had eight properties, but seven of them were through two of her nonprofit ministries, including the home where she lived. She said she doesn’t pay any of the mortgages personally, and the church handles them instead. Even the house that was in her name was not disclosed in her financial documents. For that home, there was a home-equity line of credit given in Daniels’ and her then-husband’s name.

Daniels also claimed to not own a car.

When she went through a divorce, proceeds from the sale of one of the church’s homes were split between her and her ex–husband. Technically, the report said, because the home was still listed as belonging to the church, Daniels would not have had to list it in her disclosure.

But when Daniels said the church owned three time-shares in Orlando and Daytona Beach, the commission report found that the lawmaker may have been less than forthcoming.

January 14, 2019
'Hear him howling around your kitchen door'
Next Post