Today’s weirdest story involves Donald Trump’s former personal lawyer and fixer, Michael Cohen, sock-puppets, a poll-rigging scheme, the CIO of Liberty University, and a Walmart bag full of cash. It would be darkly hilarious if it weren’t for the fact that these Keystone Krooks actually play a huge role in running the country and reshaping American religion.

The headline for the Wall Street Journal’s report barely hints at the bizarre farce outlined in the story, “Cohen Hired IT Firm to Rig Early CNBC, Drudge Polls to Favor Trump“:

In early 2015, a man who runs a small technology company showed up at Trump Tower to collect $50,000 for having helped Michael Cohen, then Donald Trump’s personal lawyer, try to rig online polls in his boss’s favor before the presidential campaign.

In his Trump Organization office, Mr. Cohen surprised the man, John Gauger, by giving him both a blue Walmart bag containing between $12,000 and $13,000 in cash and, randomly, a boxing glove that Mr. Cohen said had been worn by a Brazilian mixed-martial arts fighter, Mr. Gauger said.

During the presidential race, Mr. Cohen also asked Mr. Gauger to create a Twitter account called @WomenForCohen. The account, created in May 2016 and run by a female friend of Mr. Gauger, described Mr. Cohen as a “sex symbol,” praised his looks and character, and promoted his appearances and statements boosting Mr. Trump’s candidacy.

The only thing that could make this story more cringe-funny would be confirmation that the boxing glove had never, in fact, been worn by any Brazilian MMA fighters.

At the El Caribe, Cohen’s Uncle Morty’s Russian mob club in Brighton Beach, the wise guys have to be groaning at the sorry state of this shabby mob-craft. Didn’t this kid learn anything from hanging out there all those years?

Cohen has confirmed the Journal’s report, saying all this was done “at the direction of and for the sole benefit of” Donald Trump. Well, except maybe for this part: 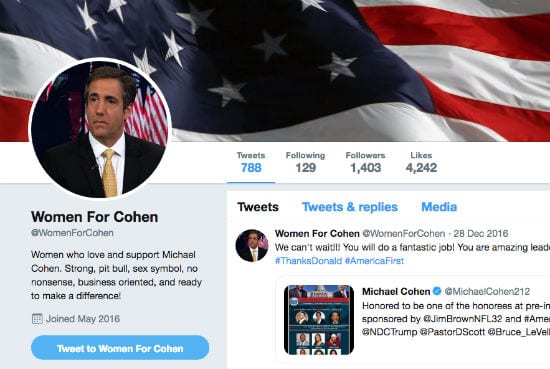 Gauger — the top IT guy at Liberty, which is mostly an online “university” — was quite chatty with the reporters in the original story posted early this morning, but the updated report posted this afternoon doesn’t include new comments from him, only from his lawyer. Apparently he figured out sometime today that it’s probably not prudent to complain to reporters that you’re still owed money for a sleazy failed attempt at polling fraud that you conducted as an unreported service for a political campaign.

And also, maybe, that it’s tricky to complain about not getting paid and not getting hired when you’ve demonstrated you’re not very good at the job:

In January 2014, Mr. Cohen asked Mr. Gauger to help Mr. Trump score well in a CNBC online poll to identify the country’s top business leaders by writing a computer script to repeatedly vote for him. Mr. Gauger was unable to get Mr. Trump into the top 100 candidates. In February 2015, as Mr. Trump prepared to enter the presidential race, Mr. Cohen asked him to do the same for a Drudge Report poll of potential Republican candidates, Mr. Gauger said. Mr. Trump ranked fifth, with about 24,000 votes, or 5 percent of the total.

After making the cash payment at Trump Tower, Mr. Cohen kept saying he would pay the balance of the $50,000 but never did, Mr. Gauger said. Mr. Cohen also promised to get RedFinch work for Mr. Trump’s campaign. He set up two phone calls for Mr. Gauger with campaign officials, who didn’t hire him, he said.

Maybe Gauger could have collected the full $50,000 if @WomenforCohen hadn’t proven to be such an obvious sock-puppet account. For now, his best shot at getting the rest of that money might be trying to auction off that boxing glove for $37,000. Or maybe he could earn it by creating a new sock-puppet account for his boss, Jerry Falwell Jr., called something like @WhoAmongstUsHasn’tGivenASouthBeachPoolBoyMillionsOfDollars.

Gauger’s going to need that money to pay his new lawyer. Michael Cohen has been called to testify before the House Oversight Committee on Feb. 7.