More than 22,000 Twitter users retweeted a warning that “There is a thing called ‘Momo’ that’s instructing kids to kill themselves. INFORM EVERYONE YOU CAN.”

Sarah Huckabee Sanders says that “Democrats are harassing the president to distract from their radical agenda of making America a socialist country, killing babies after they’re born, and pushing a ‘green new deal’ that would destroy jobs and bankrupt America.”

Here we have multiple examples of people telling us what they believe. And in every case, what they claim to “believe” is unbelievable. Their purported beliefs are literally in-credible — which is to say they have no credibility.

The bigger problem, in other words, is not that these people have “bad facts,” but that they are speaking in bad faith.

We are often lectured that we must never presume to say such a thing — that any accusation of bad faith or malicious intent is so taboo that we must avoid such a presumption or even such a conclusion at all costs. We are told that intent is unknowable and inscrutable and mysterious. We cannot read other people’s minds or know for sure what is in their hearts.

“What comes out of the mouth proceeds from the heart, and this is what defiles,” Jesus said, “For out of the heart come evil intentions, murder, adultery, fornication, theft, false witness, slander.”

And yet we are constantly told that it is forbidden to retrace what comes out of the mouth back to the heart from whence it comes. We are told that it is not permitted, or not possible, to observe the process Jesus describes.

And thus we also empower those willfully gullible dupes who in turn empower the weaponizers of bad faith. We bend over backwards to say, “Well, hold on, maybe those thousands of people retweeting nonsense about Momo just didn’t know any better.” We extend them an innocence based on ignorance, pretending that ignorance is not an active, conscious choice. The truth and the evidence of that truth was only a few clicks away, but they forwarded their “Momo” warnings without bothering to check not because they didn’t know any better, but because they didn’t want to know any better. Because knowing better would’ve spoiled all of the titillating fun.

And, again, acknowledging that does not require any magical “mind-reading” powers. Their bad faith is observable and evident. They purport to be fearful and concerned and upset by this news of evil “Momo” messengers preying on children. If that claim was made in good faith, then these folks would be relieved to learn that it’s all a hoax and a lie. “Oh, thank God,” they would say. But they do not say this and they are not relieved, because they preferred to go on pretending that it was true. Confronted with the evidence of the hoax they had chosen to avoid glancing at, they get angry and resentful to have it pointed out to them. 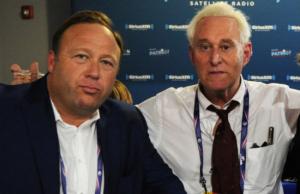 The use of bad faith as a political weapon has become so prevalent now, involving so many ludicrously over-the-top claims that we barely even bother noticing when Alex Jones or the NRA pushes the idea that the mass-shootings in New Zealand were a “false flag” conducted by some Islamo-Communist lefty.

This brazenly bad-faith garbage has become so common, with so many people claiming to believe things we all know they do not and cannot believe, that it startles us when some disturbed individual takes them seriously. A delusional teenager in Oklahoma kills his parents believing that they’re part of a QAnon-style conspiracy of Satanists. A meth-addled Ohio man kidnaps his neighbor, imprisoning her in a hole beneath his shed, because he’s trying to “rescue” her from a Satanic cabal of deep-state sex-traffickers.

We regard such people as not being in their right minds not because their actions do not flow rationally from what they claim to believe, but because it is tragically irrational for them to be treating such obviously bad-faith claims as good-faith truths. We don’t suspect that Wiles or Jackson or Sanders is a danger to themselves or to others due to a psychotic breakdown because we know that none of them takes their own claims seriously. We know they do not believe what they are saying and so we don’t expect them to ever act as though the outlandish things they are saying were true.

March 20, 2019 Do you remember the moment you finally did something about it?
Recent Comments
0 | Leave a Comment
Browse Our Archives
get the latest from
slacktivist
Sign up for our newsletter
POPULAR AT PATHEOS Progressive Christian
1