Do you remember the moment you finally did something about it?

Do you remember the moment you finally did something about it? March 20, 2019 Fred Clark

• Patrick Blanchfield at the Revealer on Satanic baby-killers: “Suffer the Children: Why the charge of child sacrifice thrives in our contemporary discourse.”

“Discourse” is maybe too lofty a word for the stew of propaganda, false witness, urban legend, and fantasy role-playing in which this perennial accusation still thrives. But then that same fetid stew is the source of the doctrine that now shapes and defines the identity of the faith tradition I was raised in. So OK, then.

Blanchfield traces the long ugly pedigree of this accusation — starting in 310 BCE, when it couldn’t yet involve Satanic baby-killers because Satan hadn’t been invented yet. But evil baby-killer was still the superlative charge that everybody sought to level against everybody else because then, as now, it was seen as justifying absolutely anything in opposition to it:

In this mode — as a synecdoche for depravity-that-must-be-stamped-out — the charge of child sacrifice thrives, with varying degrees of subtlety and transformation, in our contemporary discourse. First and foremost, the Blood Libel specifically — that longstanding Western tradition of accusing Jews of secret ritual killing of Christian babies — persists to this day, whether voiced as such by unreconstructed anti-Semites, or packaged, suitably tweaked and memefied, by alt-right activists and celebrities. This hoary conspiracy theory coexists with, and bleeds into, other narratives about elite corruption, a lexicon in which horrific violence against children regularly functions as a kind of Ultimate Horror and Primal Sin — the symbol and material correlative of unspeakable transgression, Satanic pacts, and The Evil That Goes On Behind Closed Doors.

From tales of Democratic National Committee members supposedly torturing children beneath Comet Ping Pong Pizza in Washington to the feverish predictions QAnon, the American right has proven a particularly welcome market for such thinking. Meanwhile, anti-abortion rhetoric painting Democrats as the party of “infanticide” has been renewed across the Republican mainstream.

In some instances, a fixation with child-murdering Death Cults can seem not just a primary feature of right-wing political expression, but its sole preoccupation, a frame for understanding everything else.

I think I’d only tweak that a bit. “Satanic baby-killers” has, indeed, become the sole preoccupation of right-wing political expression and of white evangelical religion, but it’s not so much a “frame for understanding everything else” as a mechanism for avoiding everything else. It is the ultimate trump-card of what-aboutism, the means for distracting us all — themselves and the rest of us as well — from the underlying matters that would allow both them and us to see and to “understand everything else.”

• Also at the Revealer, Heather D. Curtis looks at the overlooked influence of the Christian Herald newspaper and the kind of activist charity that defined evangelical Protestantism a century ago: “Holy Humanitarians: Evangelicals and Global Aid.”

The folks Curtis discusses — the Herald’s editor and writers, but also its massive readership — were undoubtedly “evangelical.” They’re part of the same Protestant tradition that we speak of today using that word, but that tradition has changed so much in the intervening century that the substance and natural expression of their faith seems almost incomprehensibly strange from our 21st-century vantage point. White evangelicalism today is no longer marked by “sympathy for the poor, the downtrodden, and the distressed” but by resentment of them.

How did that change come about? Ask the most prominent white evangelical spokespeople that question and they’ll all say the same thing: “Never mind that … what about abortion!” (And, again, “discourse” is too kind a word for that maneuver or for the underlying sins it was adopted to distract us all from.)

• Related to all that, a new Pew Research poll finds that more than two-thirds of white evangelicals still support Donald Trump — 69 percent (not nice). That’s down ever so slightly from his previous support levels with that group, producing an interesting spectrum of headlines. Pro-Trump publications are touting the poll as showing that Trump still has very strong white evangelical support. Pro-Kavanaugh-and-Gorsuch white evangelical publications that also don’t want to be held accountable for selected aspects of Trump’s cruelty emphasize the slight dip in his support, doubling down on their insistence that real, true, church-going, daily devotion-doing, white evangelicals aren’t such feckless partisan loyalists. Jemar Tisby ain’t having that: “White evangelical support for Trump comes from churchgoers, not EINOs.”

How do all these devout white evangelical churchgoers justify their support for Trump? How else? By means of the “synecdoche for depravity-that-must-be-stamped-out,” the ever-present Blood Libel repackaged in a shiny new American idiom.

• The new trailer for Season 3 of Stranger Things includes a bit of “Baba O’Riley,” which is enough of an excuse to post this gem from Wussy again. 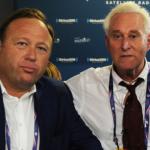