“As a nation, we’re wearing our underwear on our head and going to church.”

“Donald Trump has warned his political opponents of the possibility that they could eventually be confronted by armed Trump supporters in and out of uniform, telling a right-wing website on Monday that ‘it would be very bad, very bad’ if his backers in the military, police and a motorcycle group were provoked into getting ‘tough.'”

“Colleges are increasingly seen for what they are: another system that the wealthy can game.”

“This works out on average to one sexual assault by HHS staff on [an] unaccompanied minor per week.”

“The fact that a garbage legal argument was rejected by the federal courts today does not mean that it will be rejected tomorrow, so long as powerful groups like the Federalist Society are pushing judges who may embrace that ridiculous argument.” 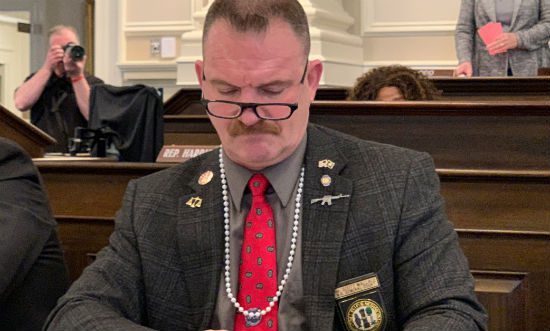 “How was it possible that I was the victim and I was the prisoner?”

“Ten children, part of the same extended family, were killed by a U.S. air strike in Afghanistan, along with three adult civilians, the United Nations said on Monday [March 25, 2019, the 6,385th day of the U.S.-led war in Afghanistan].

“So the public is acting as an early investor, putting tons of money in the development of drugs that then become privatized, and then they receive no return on the investment that they have made.”

“Although Malek lived a long life active in Republican politics, he will always be remembered as the man who counted Jews in the government for Richard Nixon.”

“My name is Germán Dam, I am one of the journalists who published the information.”

“The Trump administration has demonstrated a clear pattern, through statements and policies, that it disfavors immigrants of color and black and African immigrants in particular.”

“I have been on the receiving end of DOJ’s efforts to spread religious liberty.”

“Lefemine had passed out packets of anti-feminist literature, expressed his view that the Bible says women are not fit for public office, and read aloud from an article titled, ‘The Feminism of the Mothers is the Destruction of the Daughters.'”

“The jail system and the correctional system was never meant to be a country club.”

“Like nearly all supply-siders, he has clung to this dogma in the face of repeated, spectacular failures.”

“The Trump administration, particularly when it comes to foreign policy under the deeply religious supervision of Mike Pompeo and Vice President Mike Pence, continually pitches itself to the Christian Right.”

“But it wasn’t just cruel, it was also illegal.”

“From a legal standpoint, the argument ‘and I would have gotten away with it, too, if it weren’t for you meddling special counsels‘ isn’t especially strong.”

“A 9-year-old United States citizen was detained by Customs and Border Patrol officials for more than 30 hours this week.”

“It is patently unfair for someone to be detained for six weeks over something that is nothing more than an administrative error and a misunderstanding.”

“We have detected that the barbed wire that was installed in the border area is no longer there.”

“Fight for your lives before it’s someone else’s job.”

March 27, 2019 A story in which no one got what they deserved
Recent Comments
0 | Leave a Comment
Browse Our Archives
Follow Us!