An old hoax that people still choose to want to believe

Marie Joseph Gabriel Antoine Jogand-Pagès was a troll, and boy oh boy was he ever good at it. He spent years perpetrating — and then publicly confessing to and debunking — one of the greatest hoaxes the world had ever seen. To his frustration, and endless amusement, his confessions only seemed to spread the hoax more widely and firmly than ever.

Jogand-Pagès is best known by one of his many pen-names, Léo Taxil. But that name was never quite as famous or infamous as another of his pseudonyms — the best-selling memoirist Diana Vaughan.

Vaughan’s Memoires recounted her former life as a high-ranking member of a secret Satanic society who found redemption by converting to Christianity. 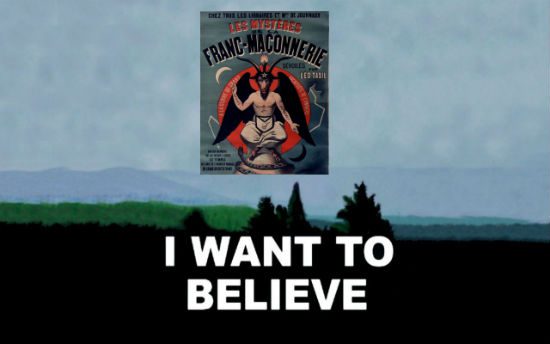 It’s an old con that’s still being run, right now, today, by numerous D-list grifters passing the offering plate in evangelical and Catholic churches all across America. None of the current practitioners are as devoted or skilled as Taxil was. And few of them seem to take the kind of candid delight he found in fleecing the gullible, telling them he was doing so, and then coming back around to fleece them again.

In a 1906 interview, just a few months before his death, Taxil was still marveling at how easy it had been:

“The public made me what I am; the arch-liar of the period,” confessed Taxil, “for when I first commenced to write against the Masons my object was amusement pure and simple. The crimes I laid at their door were so grotesque, so impossible, so widely exaggerated, I thought everybody would see the joke and give me credit for originating a new line of humor. But my readers wouldn’t have it so; they accepted my fables as gospel truth, and the more I lied for the purpose of showing that I lied, the more convinced became they that I was a paragon of veracity.

“Then it dawned upon me that there was lots of money in being a Munchausen of the right kind, and for twelve years I gave it to them hot and strong, but never too hot. When indicting such slush as the story of the devil snake who wrote prophecies on Diana’s back with the end of his tail, I sometimes said to myself: ‘Hold on, you are going too far,’ but I didn’t. My readers even took kindly to the yarn of the devil who, in order to marry a Mason, transformed himself into a crocodile, and, despite the masquerade, played the piano wonderfully well.

“One day when lecturing at Lille, I told my audience that I had just had an apparition of Nautilus, the most daring affront on human credulity I had so far risked. But my hearers never turned a hair. ‘Hear ye, the doctor has seen Nautulius,’ they said with admiring glances. Of course no one had a clear idea of who Nautilus was, I didn’t myself, but they assumed that he was a devil.

“Ah, the jolly evenings I spent with my fellow authors hatching out new plots, new, unheard of perversions of truth and logic, each trying to outdo the other in organized mystification. I thought I would kill myself laughing at some of the things proposed, but everything went; there is no limit to human stupidity.”

As I said, Taxil was a very good troll. I did not say he was a very good person. We cannot and should not trust anything that such a person has to say, yet I think there’s some truth in his description of how this whole thing began and then spiraled beyond his control. I think he began sincerely believing that he was writing an overly broad satire and that he was genuinely surprised and disappointed when readers swallowed it whole. That disappointment soured into contempt and that contempt allowed him to rationalize all the money he was raking in promoting his ever-more absurd lies. Taxil died before W.C. Fields ever uttered the phrase “Never give a sucker an even break,” but it still pretty much sums up his philosophy in life.

The Charleston City Paper recently published a terrific history of the Taxil hoax. Dustin Waters’ “A Modern History of Satanic Panic in South Carolina” highlights the local angle. Charleston, Taxil wrote, was where Diana Vaughan first met her demon bride. It was, “she” said, the location of the:

… headquarters of a secret Masonic sect called the Palladians and their Satanic temple. Concealed at the center of a great maze, the Palladian chapel contained the “Sanctum Regnum” where a monstrous statue of Baphomet stood.

… Oddly enough, the initial version of Diana’s story that appeared in her hometown paper after her escape from Charleston was later corroborated by a purported acquaintance, who claimed that there were roughly 500,000 Palladians in America.

People loved the idea of that. They couldn’t get enough of “Diana Vaughan’s” lurid confessions. For some reason, the idea — the hope — that there were half a million evil “Palladians” sacrificing children before a monstrous statue beneath a secret underground maze was something many readers wanted desperately to believe (or to pretend to believe) was real. Their desire for such an alternate reality made Léo Taxil a wealthy man.

But as clever as he was, I don’t think Taxil properly diagnosed why “there was lots of money in being a Munchausen of the right kind.” He attributed this to “human stupidity” — believing his readers were nothing more than dim, credulous dupes. Simpletons and innocents.

Waters suggests a similar diagnosis when he laments that Taxil-like hoaxes can be spread so much more widely and quickly today, “now … that your aunt can sign into Facebook and spread whatever unsubstantiated conspiracy happens to float across her feed.”

But “your aunt” isn’t that dumb and neither were Taxil’s eager believers more than a century ago. They weren’t failing to use their brains, they were failing to listen to their conscience. Taxil wasn’t just selling them an implausible and impossible story, he was selling them a flattering story. It was a lie that reassured them they were the good and virtuous and heroic people, distinct from and better than hundreds of thousands of their neighbors who were — in fact and, more importantly, by comparison — unspeakably vile and depraved.

Taxil’s readers chose to embrace that lie, not because they did not perceive or could not comprehend the multiple impossibilities it involved, but because they weighed such impossibilities against the flatteries and they preferred the flatteries. The success of his hoax was not due to limitless “human stupidity,” but to human folly. “It is a moral rather than an intellectual defect“:

But there is some consolation in these thoughts on folly: they in no way justify us in thinking that most people are fools in all circumstances. What will really matter is whether those in power expect more from people’s folly than from their wisdom and independence of mind.

March 27, 2019
A story in which no one got what they deserved
Next Post