A First Amendment for me, but not for thee

The artist behind a gigantic painting of Donald Trump has been locked for years in a legal battle to get his piece of art a spot in a Smithsonian museum.

Julian Raven and his huge, eight-foot tall, 16-foot wide painting of Trump, “Unafraid & Unashamed,” was the aesthetic highpoint of last month’s Conservative Political Action Conference, after he displayed it at the annual conservative confab. Countless CPAC attendees posed for pictures with Raven’s giant Trump head, which he painted posed next to a falling American flag that’s being rescued by a bald eagle while flying in space.

… For more than two years, he’s tried to convince the Smithsonian’s National Portrait Gallery to display the 300-pound painting of Trump, with no success. Now, after failing to win his case in D.C.’s U.S. District Court, he’s threatening to take the matter to the top of the judicial system in order to get his painting placed.

All of which seems merely amusing — especially if you’ve seen the artwork in question: 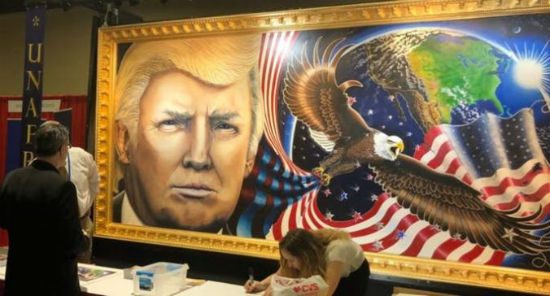 But it’s also instructive once we consider why Raven’s constitutional argument is so wrong-headed:

Raven, who is representing himself in the case, hasn’t had much luck in courtrooms so far. His attempt to force the museum to hang his painting rests on shaky legal footing, and a judge on the U.S. District Court for the District of Columbia dismissed his initial lawsuit on the grounds that the museum enjoys “what amounts to complete discretion in choosing portraits.” Rather than having his own free speech rights violated, the judge ruled, Raven was attempting to compel speech from the museum.

Until recently, when courts began deciding that the First Amendment says and means something very different for one very particular, privileged set of religious believers. (See, for example, Hobby Lobby.)

The main goal of the court-packing scheme led by the Federalist Society is to reinstate Gilded Age jurisprudence that minimizes all regulations and accountability for corporations. This effort is only succeeding due to the ferocious, unwavering support of white evangelical voters, whose part of this bargain ensures that Federalist-approved judges will also ensure rulings that privilege their particular sectarian religion — the First Amendment version of forcing museums to display their paintings.

I’m not sure whether that is the primary motivation of those evangelical voters, or whether that is secondary to the fact that such judges also invariably and unanimously support the disenfranchisement of non-white voters. I’m not sure, in other words, whether they’re fighting more for Hobby Lobby rulings or for Shelby County-style decisions. (Either way, they’re getting more of both.)

But then I’m also not sure whether they see any distinction between those. Christian nationalism seems to fuse those two things together in their quest for a second Redemption era.

I appreciate that the Christian nationalist/white evangelical voters themselves suggest a wholly separate motive for their decades-long support for this judiciary-led wrenching back to a second Gilded Age and second Redemption. They insist that their years of insistently demanding only anti-civil rights judges is just a weird, unexpected and unintended coincidence. All they wanted, they say, were anti-abortion, “pro-life” judges. And they insist that they’re surprised by the fact that every single judiciary appointment they celebrate as “pro-life” also just happens, by chance, to turn out to be a Shelby County, anti-civil-rights appointment.

This claim is chronologically bogus. White evangelical support for this kind of judiciary preceded Roe v. Wade. And it took them years after Roe to get around to adopting abortion as the cover story for it. The judges they’ve sought and supported didn’t just happen to gut the Voting Rights Act as an unfortunate and unforeseen side effect of their primary attempt to gut Roe v. Wade. Shelby County is what they got because it’s what they wanted.

And they ain’t done yet.

April 11, 2019 Youth culture killed my dog
Recent Comments
0 | Leave a Comment
Browse Our Archives
get the latest from
slacktivist
Sign up for our newsletter
POPULAR AT PATHEOS Progressive Christian
1

QAnon and Gullible Christians: The Devil...
The Thoughtful Pastor
Related posts from slacktivist

The Return of Ancient Artifacts to their Nations...
I am writing a book in my Still Here series on biblical...
view all Progressive Christian blogs
What Are Your Thoughts?leave a comment
Copyright 2008-2020, Patheos. All rights reserved.