You can read this entire series, for free, via the convenient Left Behind Index. The ebook collection The Anti-Christ Handbook: Volume 1, is available on Amazon for just $0.99. Pretending you don’t have a hermeneutic is the worst hermeneutic. Volume 2 of The Anti-Christ Handbook, completing all the posts on the first Left Behind book, is also now available. Volume 3 is coming someday.

A great deal of theology has to do not with God but with us — with humans and human nature and human choices.

God is still in the picture, of course, that’s what separates theology from other varieties of philosophy, psychology, history, or ethics. But you can’t do theology without also addressing all of those disciplines. You can’t talk about theology without talking about human nature as well as the nature of God.

That interrelated distortion is on full display here in these pages of Tribulation Force.

Nicolae Carpathia finally gets down to the specifics of his offer to hire Buck Williams. Buck rejects the terms of that offer. That’s pretty much all that happens here.

“If you do not mind,” Carpathia said, “I would now like to ask your friends to join us.” …

Buck didn’t know if it was just his imagination, but it seemed both Steve Plank and Chaim Rosenzweig had bemused, knowing looks when they entered, trailed by Hattie. She set a chair from the conference table on the other side of Buck, and the men sat. Hattie left again.

The only other books I’ve read that paid this much attention to seating arrangements all involved Hercule Poirot saying, “You may wonder why I have called you all here this evening …” And yet for all of that, I still don’t have anything like a clear picture of what Nicolae’s office looks like.

“Mr. Williams has a prerequisite,” Carpathia announced, to the low murmur from Plank and Rosenzweig. “He must be headquartered in Chicago.”

“That just helps narrow it down,” Dr. Rosenzweig said. “Does it not?”

As we know from everything from The Tempest to High Anxiety, any genius scientist in the unwitting or unwilling employ of an evil mastermind will also have a brilliant, beautiful and devoted daughter. The male protagonist will, by definition, fall in love with said daughter. It simply won’t do to have a character like Dr. Chaim Rosenzweig unless he also has a brilliant and beautiful daughter. And if won’t do for Buck to have a wise-but-befuddled old mentor like Dr. Rosenzweig without consequently falling in love with that same requisite daughter.

Hence another of my theories, otherwise unsupported by the text: Irene Steele’s religious devotion arose, in part, from the gnawing guilt she had felt ever since her brief-but-torrid affair with an Israeli botanist 21 years ago.

The secretary-general turned toward Buck. “Here is my offer: You become president and publisher of the Chicago Tribune, which I shall acquire from the Wrigley family within the next two months. I will rename it The Midwest Tribune and publish it under the auspices of Global Community Enterprises. The headquarters will remain Tribune Tower in Chicago. Along with your job comes a limousine with driver, a personal valet, whatever staff you deem necessary, a home on the North Shore with domestic help, and a retreat home on Lake Geneva in southern Wisconsin. Beyond naming the publication and the publishing company, I will not intrude on your decision making. You will have complete freedom to run the paper any way you wish.”

This list of perks, incidentally, was identical to Jenkins’ own list of demands to the Tribune company for his continued employment with them as the writer of Gil Thorp. The company agreed to the limo, valet and North Shore mansion with servants, but when they balked at the swanky Wisconsin retreat, Jenkins walked away from the strip.

Nicolae’s list of perks, tellingly, did not include a generous 401(k). Of course, if he’s really as smart and evil as the authors make him out to be, he wouldn’t offer a 401(k) retirement plan but, instead, would tempt the thousands of new “president and publishers” he’ll need to hire for his new Global Community media empire with an even more generous-sounding offer of a full pension for which they’d be eligible after just seven years of service.

Buck doesn’t pay any attention to all this talk of perks and benefits. He’s more interested in the question of editorial control. That’s the right thing to be worried about, since Nicolae makes it clear that his One World Media monopoly will be wholly owned and operated by his One World Government.

Buck is shocked by the audacity of this scheme. Nicolae, he thinks to himself, would “break every rule of journalistic ethics by owning a major media outlet while serving as secretary-general of the United Nations.”

Setting aside that Buck’s concern for journalistic ethics is, again, a bit out of place while he’s in the middle of a first-class junket under an assumed name, the larger problem here is that he fails to grasp the scope and scale of Nicolae’s project. The Romanian president and U.N. secretary-general isn’t merely proposing to own “a major media outlet,” but to own all media outlets, major and minor, in every city, region and nation on earth.

(And boy is Buck going to be disappointed when he learns that his “retreat home on Lake Geneva” is actually a time-share that he’ll be splitting with the president/publishers of Time magazine, the Sydney Morning Herald, Paramount studios, BBC World Service, Clear Channel, Le Monde, Cat Fancy and the newly renamed Highlights for Grieving Parents.*) 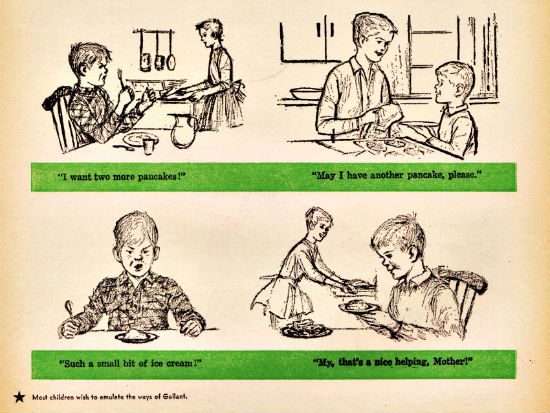 Buck heard Nicolae’s promise of “complete freedom to run the paper any way you wish,” but he doesn’t trust it. He cagily suspects the Antichrist may be up to no good. OWG-ownership of the Trib, he protests, would make it “impotent as an independent news voice.”

“Are you serious? You would allow your own publication to criticize you? To take issue with the United Nations?”

“I welcome the accountability. My motives are pure, my goals are peaceful, and my audience is global.”

Nicolae’s motives and their dubious purity turns out to be the key issue at stake here as Buck and the authors view the situation. Buck splutters his protest for a few more paragraphs until Nicolae brings it back to this central question of his motives:

“If my motives were anything but ideal, I would have a problem with it too. But what is wrong with controlling global news when we are headed toward peace and harmony and unity?”

“Where is the power to think for oneself?” Buck asked. “Where is the forum for diverse ideas? What happens to the court of public opinion?”

“The court of public opinion,” Steve said, “is calling for more of what the secretary-general has to offer.”

Buck was defeated, and he knew it.

He’s defeated here because he doesn’t fundamentally disagree with what Nicolae has just said. The Antichrist says that the concentration of unchecked, unbalanced, unaccountable power in one person’s hands is only problematic if that person’s motives are “anything but ideal.” Buck and the authors accept that wholeheartedly. All they object to is Nicolae’s claim that his motives are ideal.

Put another way, Buck is not, in principle, opposed to the idea of a benevolent dictatorship. He just doesn’t believe, in this particular case, that Nicolae happens to be truly benevolent.

In the moral universe of Left Behind, there is one and only one thing that is necessary and sufficient for keeping power in check: Virtue (which is to say, virtuous intent — or passionate sincerity). In such a universe, a Good Person can and ought to be trusted to wield unchecked and unlimited power. And a Bad Person, by contrast, must not be trusted with even limited, constrained, accountable power.

This idea reflects a dangerously naive understanding of human nature. It’s a radically different notion than the pessimistic, Madisonian perspective that shapes America’s Constitution. The idea at work there is that no one is virtuous enough to be trusted with unconstrained power.

Reinhold Niebuhr often joked that humanity’s inherent sinfulness was the only “empirically verifiable” Christian doctrine. Look around, he was saying, see anyone anywhere who you think is so perfectly virtuous that she or he could be trusted to wield unconstrained power over everyone else?

But this pessimistic appreciation for human corruptibility isn’t the only thing Christians perceive when they look at human nature. We also see creatures made in God’s image, creatures that God has deemed worthy of relentless love and affection, creatures destined for something better than corruption. Niebuhr argued that these two sides of human nature suggested that democracy — with power widely distributed and widely entrusted, but never unconstrained — was a commendable model. “[Humanity’s] capacity for justice makes democracy possible,” he said, “but [humanity’s] inclination to injustice makes democracy necessary.”

LaHaye & Jenkins, by contrast, don’t see these two sides of human nature as being present in every person. They view some people — the redeemed — as possessing a capacity for justice. And they view other people — the unregenerate unredeemed — as having an inclination to injustice. The redeemed bear the image of God. The unredeemed are totally depraved.

So here we are at that interrelated distortion I mentioned above and the unanswerable chicken-and-egg question at the heart of L&J’s theology. Did they arrive at this understanding of human nature because this is what they imagine God is like — a benevolent dictator whose fierce, cruel destruction of his enemies must be interpreted as a function of that benevolence? Or did they come to imagine that this is what God is like because of their (stunted) understanding of human nature, because they imagine that, if they were God, this is what they would do?

I’m guessing C. Both of the above.

* The Rapturing of all children below the pubescent “age of accountability” would mean, ironically, that both Gallant and Goofus would be among the disappeared now in Heaven.

** I would say that the authors’ understanding of human nature is “unbiblical” — evangelicals’ favorite trump-card word — except that by now it’s abundantly clear that LaHaye & Jenkins’ idea of what is or isn’t actually to be found in the pages of the Bible is utterly unpredictable and indecipherable. A Romanian secretary-general of the global federation of nations who seeks to rebuild the ancient city of Babylon, for example, is something they would say is a “biblical” teaching. “Blessed are the peacemakers,” on the other hand, they would argue is not “biblical.” Given such bewildering use of the term, it’s probably best to avoid it when discussing the authors.

June 13, 2019
'Hot water heater' is redundant, and also it's leaking all over the basement
Next Post