I don’t have a chance this time

• This week I learned that Calvinisht preacher John Piper is not a Monty Python fan.

Here is a much more interesting story involving a better breed of white evangelicals in Minnesota.

• “When you are dealing with social idiocy on this scale, you can either laugh or cry. Gaiman and Pratchett decided to laugh.”

That’s from Philip Jenkins writing about “The Omen, Good Omens, and Why Neil Gaiman Is Not the Antichrist.” It’s a quick little tour of late-20th-century pop culture and the way “devil movies” — even bad devil movies — shaped folklore and thus, in turn, shaped “popular theological understanding … and biblical interpretation.” 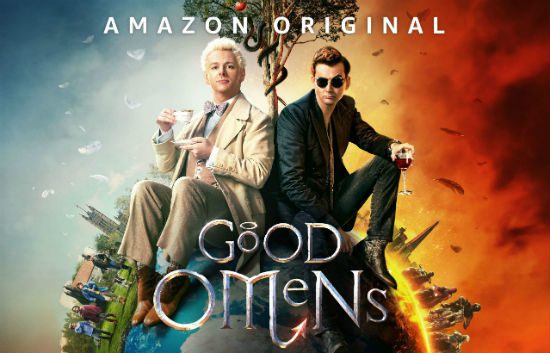 Yes. Hal Lindsey’s hallucinogenic take on premillennial dispensational folklore helped spawn the original Omen movies and those movies subsequently shaped the pop-theology of End Times preachers — including people like Tim LaHaye who almost certainly never personally watched them. (LaHaye was a fundie, so R-rated movies were forbidden by his religion. He also would’ve hated anything with Gregory Peck because LaHaye thought Atticus Finch was an evil Commie sympathizer. Probably wasn’t a fan of Gentleman’s Agreement or On the Beach either. Not to mention that Tim LaHaye spent his entire life trying to undo the political legacy of the guy Peck played in The Blue and the Gray.)

Jenkins discusses the way the devilish pop-culture of things like The Omen affected the real world and damaged real lives through the first wave of the Satanic Panic, highlighting especially the case of the West Memphis Three. Here’s another look at how this inverted religious panic destroyed communities: “Kern County (California) ‘Witch Hunt’: Survivors of infamous child sex abuse trial still haunted by the horror 35 years later.”

Both that article and Jenkins’ post err, I think, in assuming that the Satanic Panic is something from the past, rather than something that is still happening, albeit in new forms and expressions. What is Pizzagate or QAnonsense if not Warnke-ism with a chan-forum spin?

And then, of course, there’s the largest, most dishonestly pernicious “social idiocy” shaped by all of this — the most influential and culture-defining legacy of the Satanic Panic: anti-abortion politics and religion. It’s Satanic baby-killers all the way down.

Alex Nichols understands this and describes it well here, “Slender Man for Boomers.”

Reiterations of this new urban legend on Twitter, Reddit and Facebook frequently come paired with an exclamation that “these people are sick!” Believers are clearly getting some kind of visceral thrill from imagining these depraved vampiric acts, and the stories themselves seem tailor-made to produce this type of reaction. It’s not just child trafficking, but Satanic child trafficking, and they’re also drinking the child’s blood while wearing a mask made of its skin. It certainly recalls the medieval blood libel against Jews — and that particular ethnoreligious group does tend to come up a lot in QAnon circles — but it’s hard to say whether one inspired the other. It could just be that bored English peasants in the 13th century and Boomers who never watched the Saw movies arrived independently at similarly overwrought horror scenarios through the same process of freaking yourself out by imagining the most twisted serial killer of all time. …

The point of these stories is to provide the reader with an enjoyable wave of visceral disgust, but also to dehumanize opponents of Donald Trump as child-murderers and cannibals the way Europeans once dehumanized their colonial subjects. Regular use of the trope that one’s opponents are drinking the blood of children doesn’t always lead to violence — pro-life activists sometimes use this same frenzied tone to describe what they think goes on at Planned Parenthood — but most of them have an understanding that the gory rhetoric is only one component of a project that mostly involves ushering dorky Georgetown alums into the federal judiciary. Occasionally, though, someone takes the rhetoric about genocide and dismembered children as seriously as it sounds.

• Related: I have now seen Good Omens. It is delightful, funny, and sweetly good-natured. One piece it really highlights from the books is the way that our heroes, being an angel and a devil, did not participate in the eating of the forbidden fruit from Eden and so, unlike the humans they come to love and care about, they’re fumbling through the apocalypse without the curse or blessing of “the knowledge of good and evil.”

And Sheen and Tennant are both terrific. Just terrific.

• Also sort-of related: Libby Anne on “Are the End Times Changing?” A self-proclaimed INC “prophet” is urging his followers to rethink their eschatology because, he says, Donald Trump is bringing about utopia and so we should all be 19th-century post-millennialists now. Libby Anne does a good job listing a few dozen of the reasons this argument is Very Wrong.

• Nationalize insulin. You want a brand-name market for brand-name insulin? Fine. Knock yourself out. But the generic version should be available, at cost, from the government. Or free. Free would be fine too.

• The title of this post comes from Soccer Mommy’s “Last Girl.”