A dream too tired to come true

• I knew Sue Bird was good at the basketball. I did not know she was also a very funny writer:

I remember telling my editor here something like, “It would take the President of the United States going on a hate-filled Twitter spree trolling my girlfriend while she was putting American soccer, women’s sports, equal pay, gay pride and TRUE LOVE on her back, all at once, scoring two majestic goals to lead Team USA to a thrilling victory over France and a place in the World Cup SEMIFINALS, for me to ever even think about writing again.”

But there’s also something deadly serious to be gleaned from her essay, “So the President F*cking Hates My Girlfriend.” This is not normal. It is not normal for the president of the United States to unleash and encourage a torrent of hate-speech and death threats toward a private citizen and then for him to publicly relish and delight in seeing it happen.

World-class athletes representing America have gotten death threats from deplorables before. Just think of the wave of white-hot white hate spewed at Tommy Smith and John Carlos after they raised their fists after medaling at the 1968 Olympics. But no president or presidential candidate weighed in at the time to directly spur on those death threats and violent vitriol. Not even Richard Nixon. Not even George freaking Wallace.

Donald Trump is a lawless thug and a bully whose naked abuse of power has been checked only by his own ineptitude and dim incompetence.

But there’s also a piece of real wisdom in Sue Bird’s essay, a bit of sage advice that can also serve as a warning:

I think Megan’s sensitivity is what drives her to fight for others. I think it’s what drove her to take a knee. The Megan you’re seeing now? It’s the stronger version of the one who knelt in the first place. All the threats, all the criticism, all the fallout — coming out on the other side of that is what makes her seem so unfazed by the assholes of the world now.

I think in trying to help others, Megan has cemented who she is.

• Googling around about Tommy Smith and John Carlos led me to learn something I hadn’t realized about Australian sprinter Peter Norman, who stood with and supported their gesture in 1968. Norman was an evangelical Christian who was raised in the Salvation Army. His evangelical faith shaped and inspired his actions just as Colin Kaepernick’s shaped and inspired his. But that faith usually gets left out of their stories not because they abandoned their tradition, but because it rejected them for violating its most sacred doctrine.

• So Tylenol may be a kind of moral depressant:

Acetaminophen reduced empathy in response to others’ pain. … These findings suggest that the physical painkiller acetaminophen reduces empathy for pain and provide a new perspective on the neurochemical bases of empathy. Because empathy regulates prosocial and antisocial behavior, these drug-induced reductions in empathy raise concerns about the broader social side effects of acetaminophen, which is taken by almost a quarter of adults in the United States each week.

No more Tylenol for members of Congress. Or for CBP agents, who apparently must be downing these pills like candy.

• I went back into the archives searching for when the traditional virtue of empathy — the bedrock of the Golden Rule — became a partisan punching bag. I’d thought this weird and explicitly sociopathic “argument” traced back to President Barack Obama’s description of Supreme Court nominee Sonia Sotomayor as someone possessing the heretofore unambiguously positive and admirable quality of “empathy” as the breaking point for Republicans (if Obama praised anything, they imagined they had to condemn it). But I find that Fox News and other partisan Republican outlets have been raging against empathy since the early 2000s.

Opposition to empathy is genuinely one of the most disturbing, morally imbecilic talking points to emerge from America’s white right-wing cesspools. It’s literally an attack on the Golden Rule itself, an assertion that we have no obligation to do unto others as we would have them do unto us.

So what makes anyone listen to such a vile attack, nodding their head in agreement? Partly, I suppose, it’s just the habit of playing one’s assigned role. Fox et. al. says jump and you say “How high?” Partly I suspect it’s due to some weird idea about empathy being a form of weakness. And partly due to the fear of retribution that any thoughts of empathy is bound to conjure up for people who know that they would seek such retribution if their situations were reversed.

But reading the hideous posts from those CBP agents, and hearing from pro-Trump Camp protesters egged on in support of their hateful cruelty, I’ve also begun to suspect that many people oppose and condemn empathy because they don’t understand it and therefore don’t believe it exists. They have trained themselves never to think of others in such a way and so they’re bewildered when normal people claim to do so. If I don’t care, at all, about the plight of children in cages, then I cannot believe what others say when they claim to care about those kids. I will think they’re faking it for some weird liberal reason. And so I will mock their tears, just as I mocked Obama’s tears after Sandy Hook, because I desperately need to believe those tears are “fake.”

Rejecting my own humanity, I will be forced to deny others’ as well, lest I be forced to come to terms with my own inhumanity. Or something like that. I dunno. I’m trying to empathize with people who deny, reject, and oppose empathy. But it’s tough.

• The ginormous femur of a Pachystruthio dmanisensis — an ostrich-like flightless giant bird that weighed as much as 990 pounds — was recently discovered in Crimea.

If there’s one thing for certain that the book of Job teaches us, it’s that God loves ostriches.

JOB: Why is there pain, suffering, and injustice?

JOB: But why do even the righteous suff–

GOD: They’re not too bright, but, like, really fast. Have you seen them run? Watch this thing run!

If the author of Job had known about Pachystruthio, there’d be another 10 chapters in that book.

• The title for this post comes from the Replacements.

June 30, 2019
I'm looking for a reassuring candidate
Next Post 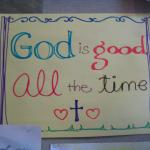