‘We’ve come to cash a check’

And yet most Americans have never heard this part:

We’ve come to our nation’s capital to cash a check. When the architects of our republic wrote the magnificent words of the Constitution and the Declaration of Independence, they were signing a promissory note to which every American was to fall heir. This note was a promise that all [people], yes, black [people] as well as white [people], would be guaranteed the unalienable rights of life, liberty, and the pursuit of happiness. It is obvious today that America has defaulted on this promissory note insofar as her citizens of color are concerned. Instead of honoring this sacred obligation, America has given the Negro people a bad check, a check which has come back marked insufficient funds.

That is the third and fourth paragraphs of Martin Luther King Jr.’s “I Have a Dream” address, delivered from the steps of the Lincoln Memorial at the March on Washington for Jobs and Freedom in 1963.

These opening statements set the framework for the entire speech, yet neither they nor that framework — the cashing of this check, the honoring of America’s sacred obligation — is usually mentioned at all when people invoke this speech in an attempt to cloak themselves in the mantle of King’s vision or to claim for themselves his approval as a shield against criticism.

Almost always, instead, when this speech is invoked or referenced, the citation involves some brief snippet from King’s great envisioning of what America might look like if it ever made good on its promissory note and chose to stop writing bad checks. Such citations ignore that everything King said about his “dream” of a just America was conditional and contingent. The blessed imagery of that dream could only be made real as a consequence of costly corrective action to transform injustice into justice.

Instead, this speech is selectively invoked and twisted to suggest that the check has already been paid in full. It’s quoted in a way that denies everything King described about America as it is, turning it into the dishonest claim that his dream has already been made real — that somehow every valley has already been lifted up without any need for any mountain to be laid low.

And so, again and again, we hear the bit about “the sons of former slaves and the sons of former slave owners” sitting “together at the table of brotherhood.” And we get the bit about King’s children one day living “in a nation where they will not be judged by the color of their skin but by the content of their character” — only without the tenuously conditional qualifier “one day.” And we get that lovely bit about how “little black boys and black girls will be able to join hands with little white boys and white girls as sisters and brothers,” but with King’s future-tense vision of possibility twisted into a complacent lie of present-tense reality.

And all of that is done, almost always, in defense of the claim that America’s bank of justice will never have sufficient funds to make good on its promises. Almost always, if you hear someone invoking Martin Luther King Jr’s “dream,” that person is defending the writing of bad checks or writing a bad check themselves.

This is such a commonplace thing now that it’s easy to become inured to how shallow and contemptuously sleazy it is. Thus, for example, when Sen. Ron Johnson invoked King’s “dream” on CNN in defense of racist rhetoric from his president and his party’s leader, it was such a familiar performance of perfunctory dishonesty that it might make one forget that he was displaying such flagrant bad faith. The Wisconsin Republican was trying to position himself as the heir to King and to King’s great speech while at the same time denying and rejecting everything King ever said or stood for.

Here’s what Johnson said in defense of Trump’s repeated remarks:

“America, love it or leave it” is not a new sentiment. You know, back in the ’60s that wasn’t considered racist. I just find it very unfortunate that so many parts of our public debate right now are getting immediately stuck inside a racial framework, whereas what I would like to see is us moving toward that colorblind society. I was hoping when President Obama was elected, it’d really go a long way toward healing the racial divide, so we could concentrate on the enormous challenges facing this nation, where we really could embrace Dr. King’s sentiment that let’s judge people on the content of their character rather than the color of their skin.

Ron Johnson is utterly full of it. There are only two possibilities here. Either Johnson is familiar with King’s speech and overall message and he knows that what he’s saying is a mendacious distortion of it. Or else he is a scared little schoolboy who hasn’t done the assigned reading and hopes to bluff his way through the interview by pretending that a speech he’s never bothered to read is the moral compass that guides his life.

Either way, Johnson is being a miserable shitweasel here and his feigned lamentation — his performative disappointment that those people keep making everything about race — is ridiculous on its face.

The lie is transparent and utterly unconvincing. It’s impossible to believe what Johnson is saying or even to believe that Johnson believes what he is saying.

So why does he bother rehearsing this lie? It’s not because he hopes to win support from black voters. What he’s doing, instead, is reassuring his all-white base that they’re not the problem. That the problem is, rather, that black people just have a bad attitude that keeps America from “moving toward that colorblind society” that good white folks like Ron Johnson desire above all else. Johnson is offering absolution to his white supporters, telling them they are not guilty of racism because everything is black people’s fault. It’s that stark: A racist claim offered as the basis of his defense against the charge of racism. And he’s using a carefully clipped, out-of-context phrase from Martin Luther King Jr. to reinforce it.

Like I said, this is nothing new. It’s something that happens almost daily. But it’s frequency and familiarity shouldn’t numb us to just how utterly disgraceful and gross it is. 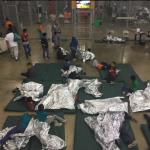