The duty of speaking ill of the dead

From Charles Dickens’ A Christmas Carol, “The Last of the Spirits”

The Spirit stopped beside one little knot of business men. Observing that the hand was pointed to them, Scrooge advanced to listen to their talk.

“No,” said a great fat man with a monstrous chin, “I don’t know much about it, either way. I only know he’s dead.”

“When did he die?” inquired another.

“Why, what was the matter with him?” asked a third, taking a vast quantity of snuff out of a very large snuff-box. “I thought he’d never die.” 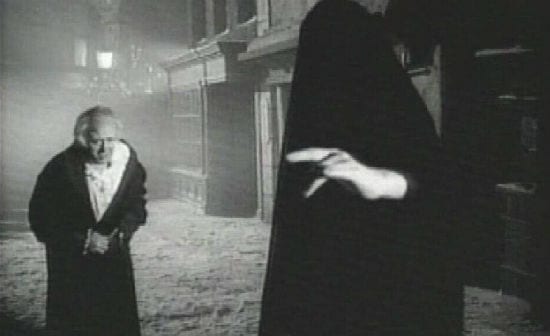 “God knows,” said the first, with a yawn.

“What has he done with his money?” asked a red-faced gentleman with a pendulous excrescence on the end of his nose, that shook like the gills of a turkey-cock.

“I haven’t heard,” said the man with the large chin, yawning again. “Left it to his company, perhaps. He hasn’t left it to me. That’s all I know.”

This pleasantry was received with a general laugh.

“It’s likely to be a very cheap funeral,” said the same speaker; “for upon my life I don’t know of anybody to go to it. Suppose we make up a party and volunteer?”

“I don’t mind going if a lunch is provided,” observed the gentleman with the excrescence on his nose. “But I must be fed, if I make one.”

“Well, I am the most disinterested among you, after all,” said the first speaker, “for I never wear black gloves, and I never eat lunch. But I’ll offer to go, if anybody else will. When I come to think of it, I’m not at all sure that I wasn’t his most particular friend; for we used to stop and speak whenever we met. Bye, bye!”

The Spirit takes Scrooge off to hear another conversation between businessmen Scrooge knew personally. They are glibly unperturbed by news of his death. Then there’s the scene with the petty thieves fencing items stolen from his deathbed, and then this:

“If there is any person in the town, who feels emotion caused by this man’s death,” said Scrooge quite agonised, “show that person to me, Spirit, I beseech you!”

The Phantom spread its dark robe before him for a moment, like a wing; and withdrawing it, revealed a room by daylight, where a mother and her children were.

She was expecting some one, and with anxious eagerness; for she walked up and down the room; started at every sound; looked out from the window; glanced at the clock; tried, but in vain, to work with her needle; and could hardly bear the voices of the children in their play.

At length the long-expected knock was heard. She hurried to the door, and met her husband; a man whose face was careworn and depressed, though he was young. There was a remarkable expression in it now; a kind of serious delight of which he felt ashamed, and which he struggled to repress.

He sat down to the dinner that had been hoarding for him by the fire; and when she asked him faintly what news (which was not until after a long silence), he appeared embarrassed how to answer.

“We are quite ruined?”

“No. There is hope yet, Caroline.”

“If he relents,” she said, amazed, “there is! Nothing is past hope, if such a miracle has happened.”

“He is past relenting,” said her husband. “He is dead.”

She was a mild and patient creature if her face spoke truth; but she was thankful in her soul to hear it, and she said so, with clasped hands. She prayed forgiveness the next moment, and was sorry; but the first was the emotion of her heart.

“What the half-drunken woman whom I told you of last night, said to me, when I tried to see him and obtain a week’s delay; and what I thought was a mere excuse to avoid me; turns out to have been quite true. He was not only very ill, but dying, then.”

“To whom will our debt be transferred?”

“I don’t know. But before that time we shall be ready with the money; and even though we were not, it would be a bad fortune indeed to find so merciless a creditor in his successor. We may sleep to-night with light hearts, Caroline!”

Yes. Soften it as they would, their hearts were lighter. The children’s faces, hushed and clustered round to hear what they so little understood, were brighter; and it was a happier house for this man’s death! The only emotion that the Ghost could show him, caused by the event, was one of pleasure.

Finally, the last of the Spirits, the Ghost of Christmas Yet to Come, whisks Ebenezer Scrooge off to the graveyard to confirm what he has suspected with growing dread: This was his death that prompted all those callous, indifferent remarks. He was, himself, going to die one day and the only emotion caused by that event would be “one of pleasure.”

Dickens believed it was better — kinder perhaps — that the pleasure and relief brought about by the death of the wicked miser should be expressed in a “softened” form. But he does not disapprove of the indifference or even the sneering mockery expressed by the businessmen earlier. Dickens saw that as necessary.

Speaking ill of the dead after a selfish, harmful life, Dickens saw, was essential because it was true and because it demonstrated to those still living such lives the urgency of their need for repentance. It was only because he was granted the grace of hearing the harsh words spoken about him after his own death that Ebenezer Scrooge found a path to redemption.

This is not a minor point in Dickens’ story. And if you like that story — if you think it has anything meaningful to say or that it deserves to be retold as often as it is and deserves to be as widely beloved and respected as it is — then you have no business wringing your hands over the supposed “incivility” of speaking ill of the dead.

The enforcers of a stunted “civility” fretted and lamented the relief and pleasure that greeted the recent deaths of Jeffrey Epstein and David Koch. Dickens knew that such civility was not merely dishonest, but dangerous. It invites moral hazard.

Yes, David Koch may be “past relenting,” but Charles Koch is not. Time is running out for him as well, but he still has time enough to follow the example of Ebenezer Scrooge or Zacchaeus and transform his life.

Unlikely, perhaps, but possible. Yet far less likely and far less possible if we all decide to discourage him from doing so by filling his ears with pleasant lies, reassuring him that his reputation will be restored in death. Pretending that he’s already heading toward a happy ending helps to ensure that he’ll never get there.

September 4, 2019 'I'm a locksmith. And I'm a locksmith'
Recent Comments
0 | Leave a Comment
Browse Our Archives
Related posts from slacktivist