Jerry Falwell Jr. is a weird dude. I think part of his dilemma is that he wants to be, and to be regarded as, rich and famous and respected and devoutly Christian, all at the same time. I suspect he’s only just beginning to realize that some of those things are mutually exclusive. But it seems he’s prioritized them in the order listed, so I guess he’ll have to settle for just the first two.

• “A better printer than salesman.” This is a sweet, very human profile of a Los Angeles landmark of sorts and the quiet man who kept it running. I doubt I’d agree with most of the materials produced by the Free Tract Society, and I think the whole “gospel tract” thing is a pernicious distortion of what evangelism is supposed to be. But I like this gentle piece of local history by Chris Nichols.

• The photograph below, by Gavin McIntyre of the Charleston Post and Courier, shows the brand that South Carolina businessman John Drayton used to sear his name into the flesh of people he considered his property, people he violently forced to work for him, without pay, for their entire lives.

Some visitors to the Charleston museum where this horrific device is on display think it’s rude, judgmental, and “politically correct” to suggest that Drayton’s creation and use of this branding iron means he was not entirely benevolent. 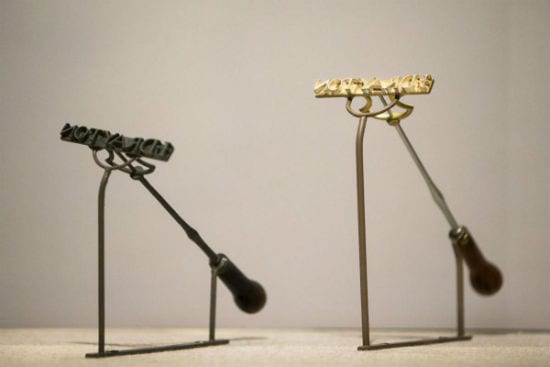 “Despite pushback, Charleston historic sites expand their interpretation of slavery,” Robert Behre reports for the Post and Courier:

Sarah Stroud Clarke, who runs the interpretive programs, said … many ask whether some slave owners, such as the Draytons, were benevolent. “That might be our top question. Interpreters try not to engage on a personal level. When you’re thinking about one person owning another person, can you use the word ‘benevolent?’”

Others have questioned her use of “enslaved persons” instead of simply “slaves.”

“I’ve been called horrific names to my face,” she said. “I have had people walk out my tours and tell me I should be ashamed of ourselves. It’s pretty jarring for a subset of our visitors who assume the tour will be something it most certainly is not.” …

“I had a woman say to me, ‘I don’t understand how you can condemn an entire generation and race of people for doing what they did. They were just doing what was legal at the time,’” Northup said. “I said to her, ‘So you have trouble condemning people for owning other people?’ That’s pretty effective, but they get mad. They get so mad.”

That’s OK. It’s not rude or unhelpful that they get mad. Their defensive anger is just one of several necessary stages they’ll need to work their way through if they — and the rest of us — are ever going to deal with the truth. It’s not civil or “nice” or persuasive to avoid risking that anger. Such anger — along with ferocious denial, bargaining, and depression — is probably an unavoidable stage in the fitful journey to acceptance.

One quibble, though, involving this bit here, about the Bible Chau carried on his first encounter with the Sentinelese, which “miraculously” shielded him from an arrow the islanders fired at the intruder:

I ﬂipped open an edition of the waterproof Bible that had stopped the arrow the Sentinelese boy had ﬁred at Chau. He recorded the verses that the shaft broke on, which conclude in Isaiah 65:1-65:2: “I am sought of them that asked not for me; I am found of them that sought me not: I said, Behold me, behold me, unto a nation that was not called by my name. I have spread out my hands all the day unto a rebellious people, which walketh in a way that was not good, after their own thoughts.”

While Chau didn’t record if he interpreted the “rebellious people” as the Sentinelese or if the verse impacted his decision to return to the island once again, it’s telling he swam ashore the next morning. And yet Witherington, the Asbury seminary theologian, who has written a book about deciphering Isaiah, said, “I don’t dismiss Chau’s sincerity or sacriﬁce, but the question is whether he interpreted Isaiah rightly — and the answer for that, I think, is clearly no.” Two more theologians confirmed that in the above passage, the “rebellious people” are actually those inside the church, as God is criticizing the Israelites for worshipping false idols.

If this passage in Isaiah is “criticizing the Israelites” then it is, emphatically, not about “those inside the church.” Isaiah (or Trito-Isaiah, if you like) was not and could not have been addressing or describing “the church” — a category that he never heard of and never imagined. I called this a quibble, but that slippery move conflating the Israelites of the book of Isaiah with the “church” of 3,000 years later feeds into problems that go way beyond the absurdity of the anachronism.

Part of what makes Clark’s essay so compelling is that it bears the appalling trajectory of Greek tragedy. Given the sincere beliefs of the actors involved in this story, its grim ending seems inevitable and predetermined. A lesson we Christians have been too slow to learn is that treating ancient Israel and “the church” as interchangeable and identical puts us on a similar tragic trajectory.

• And now some good news: “Drinking as many as eight cups of coffee a day could help you live longer, study says.”

September 3, 2019
The duty of speaking ill of the dead
Next Post