When Jesus comes back to fix God’s two huge mistakes

“Bible prophecy” is the business of explaining God’s mistakes and God’s plan to correct them at the end of the world.

That’s not how most of the popular “Bible-prophecy scholars” would prefer to describe it, but that’s what it’s all about. This is what it’s for — the whole gnarl of Rapture folklore, premillennial dispensationalism, Hal Lindsey, Scofield Bible, Left Behind, Thief in the Night, etc. etc. It’s all based on the idea that God made two huge mistakes that will ultimately be corrected when Jesus comes back, armed to the teeth. 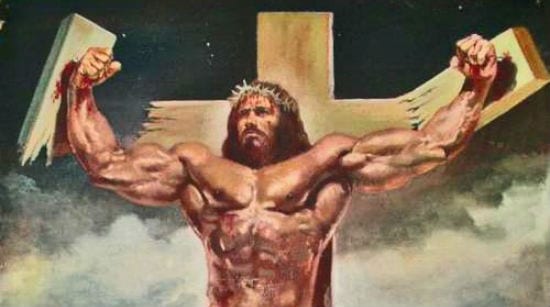 And when I say Very Bad, I mean, like, directly rejecting-the-core-of-the-gospel bad. Because the gospel itself is the first of the alleged divine “mistakes” that Rapture theology was invented to correct. I’ve often described this in the terms of an old Southern Gospel standard (riffing on Matthew 26:53):

The core of PMD Rapture theology is that this was a huge mistake — a major screw-up on God’s part. Rapture believers think Jesus should have called ten thousand angels to destroy the world and set him free. The fact that he didn’t — choosing, instead, to humble himself unto death, even death on a cross — is where the First Coming went wrong.

It really is that stark: Rapture theology regards Jesus’ birth, life, and death as a colossal failure. Jesus could and should have exploited all the power of the all-powerful to kick butt and force us puny humans to submit to what’s best for us. And because Jesus failed to do any of that, he’s going to have to come back to fix his mistakes and get it right next time. Jesus’ resurrection, in this way of thinking, was not divine vindication of the sacrificial love through which God will reconcile all things. It was merely the escape plan that would enable Jesus to come back later with heavily armed reinforcements.

That’s why Rapture theology is obsessed with the Second Coming, when Jesus 2.0 returns to correct what went wrong the first time around. And their description of that Second Coming is exactly what that song describes as the option that Jesus himself and God Godself explicitly rejected at Calvary — legions of angels sent to destroy the world by force, imposing God’s will on everything by force.

This is also why it’s no big deal for Rapture Christians to discount and dismiss the life and teachings of Jesus — the Sermon on the Mount, the parables, the parabolic acts. Those are all relics of the prior, failed dispensation. They represent the sort of thinking that led to the failure of the First Coming, and there’s no use studying such mistaken ideas unless you want to wind up repeating such failures.

This second mistake — or, rather, the mistaken idea that it’s a mistake — is a big part of why I generally try to avoid that term, “Old Testament,” preferring instead to say something like “Hebrew Scriptures.” We Christians too easily slip into thinking of the “old” as something that has been replaced and corrected and supplanted by the “new.” We wind up thinking of it as the former testament, or the no-longer-operational testament or some such.

And that way of thinking just reinforces the Very Bad theology of this second Very Bad “mistake.” That supposed mistake being, of course, the choosing of Abraham and of Israel, and all of the covenants and promises that went along with it. Clearly, according to the tenets of Rapture theology, this was a major error on God’s part. And thus, according to that same theology, it is an error that will ultimately be corrected and amended in the End Times, when Jesus 2.0 returns with his army of angels to coerce the world into submission. At that point, Rapture theology says, the children of Abraham will be given the opportunity to reject the not-so-eternal-after-all covenant Yahweh made with Israel and choose, instead, to become worshippers of the Winning Team.

I’m not trying, at this moment, to provide a comprehensive argument to that effect. Here I’m just pointing it out.

And also noting that it is, as I said, Very Bad. It is, among other things, how we wound up with Rick Wiles.