So I bit him

• “How this chair became a pop culture icon.”

This Vox video seems like just a goofy ride exploring an odd pop-culture question: Why do dozens of album covers from the 1970s feature artists sitting in the same wide-backed wicker peacock chairs? That’s a fun question, and the video has fun answering it, but it turns out the answer involves a rapid-fire tour of photographic history, an examination of life before air conditioning, a hard turn into 20th-century imperialist slave labor (including slave-labor tourism), and even an appearance by Huey Newton and the radical politics of the original Black Panther party. All in less than eight minutes. Phew.

• Former religious-right child star Ralph Reed’s upcoming Regnery Publishing “book” won’t feature the title he originally planned: “Render to God and Trump.” (No, really: “Ralph Reed calls for 2020 obedience to Trump.”) Maybe somebody at the right-wing royalty mill realized that title said the quiet parts loud and gave away too much of the game by baldly stating that: 1) Court evangelicals think of Trump as their Caesar, and 2) They think Jesus wants them to love, honor, cherish, obey, and venerate Caesar just as much as Caesar does.

It’s dismaying that Ralph Reed is still a thing. This is a man who barely escaped prison for his role fleecing local churches and Native Americans in the Jack Abramoff scam:

And a guy whose support for George W. Bush in 2000 was secured when Karl Rove paid for it with a lucrative lobbying contract for freaking Enron.

It’s also dismaying that Regnery Publishing is still a thing. Their business model of self-dealing, bulk-buying “best-sellers” to be given away as premiums for donors to the huge farm system of right-wing “non-profits” has long been exposed and mocked, but that doesn’t stop the shameless. I guess the good news here is that most of the eventual recipients of these Regnery books never actually read them as they’re too busy with Fox and Facebook and tormenting their grandchildren to have time for that.

• David Leonhardt in The New York Times: “The Rich Really Do Pay Lower Taxes Than You.” (Worth using one of your monthly paywall-free clicks to read. If you can’t afford the subscription, rest assured that you’re paying a higher tax rate than people who can.) 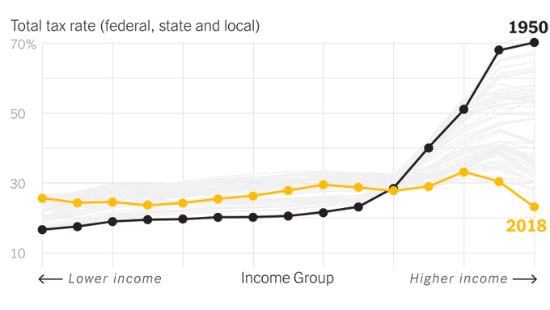 For the first time on record, the 400 wealthiest Americans last year paid a lower total tax rate — spanning federal, state and local taxes — than any other income group, according to newly released data.

That’s a sharp change from the 1950s and 1960s, when the wealthy paid vastly higher tax rates than the middle class or poor. Since then, taxes that hit the wealthiest the hardest — like the estate tax and corporate tax — have plummeted, while tax avoidance has become more common.

President Trump’s 2017 tax cut, which was largely a handout to the rich, plays a role, too. It helped push the tax rate on the 400 wealthiest households below the rates for almost everyone else.

The 1950s and 1960s, by the way, were also periods of robust economic growth and investment in national public infrastructure that benefitted everyone and further contributed to economic growth. That worked — it made the nation stronger. What we’re doing now does not.

• Jerry Falwell Jr. has settled his lawsuit with Jesus. Throw money at potential scandals until they’re buried seems to be working for Jerry Jr., for now, except that it’s causing a lot of reporters to wonder why he keeps throwing so much money at so many different potential scandals. As Josh Marshall says, “This whole story is filled with hints and suggestions that are never quite spelled out.” But eventually, someone is going to spill or some reporter is going to connect the dots and when it all gets spelled out I’m guessing it’ll be tawdrier and stranger than whatever anyone is speculating now.

Whatever it is, that is going to be the first thing any prospective employer is going to think of when they see the words “Liberty University” on anyone’s résumé. That seems likely to reduce the appeal of that degree even for the fractional subset of potential employers for whom it previously had any.

• Encouraging news from the Big Box.

• “When Mental-Health Experts, Not Police, Are the First Responders.” The Wall Street Journal’s Zusha Elinson reports on a pilot program in Oregon that promises better results for the community and for the police themselves.

This makes sense. 9-1-1 is the number we’re taught to call for emergencies, but a great many emergencies are not crimes in progress and many of them are only escalated and aggravated by the presence of a guy with a gun whose training doesn’t even begin to equip him for this and whose role and job and duty might be wholly unrelated to the situation. That’s dumb. It’s unfair to the police officers themselves to be asked to play those other roles, and it’s unfair — and sometimes deadly — for the people who needed help and got sent the cops instead.

I’ve said this before, but if you have a child in psychological distress and you call 9-1-1 and say, “My son is naked, on my roof, holding a butter knife, please send some officers over here to shoot him dead,” you will likely face criminal charges. But dozens of times every year, perhaps hundreds, parents call 9-1-1 to say “My child is in psychological distress. Please send help but please, please, please don’t hurt him!” only to have that child shot dead by police. It doesn’t have to be that way.

October 8, 2019
When Jesus comes back to fix God's two huge mistakes
Next Post

October 10, 2019 I know I'm supposed to say 'Jesus,' but it sure sounds more like a squirrel to me
Recent Comments
0 | Leave a Comment
Browse Our Archives
Related posts from slacktivist