The folly of Trumpism

I’ve come to appreciate the way these two apparently contradictory proverbs are juxtaposed in our Bibles. First we’re told not to “answer fools according to their folly” and then, in the next breath, we’re told that is exactly what we ought to do. So which is it?

The point, I think, is that no matter what you do, you’re screwed — because you’re dealing with people trapped in “folly.” When you’re up against folly, you can’t win.

This is what Dietrich Bonhoeffer said, too, in his 1943 essay “After Ten Years“:

Folly is a more dangerous enemy to the good than evil. One can protest against evil; it can be unmasked and, if need be, prevented by force. Evil always carries the seeds of its own destruction, as it makes people, at the least, uncomfortable. Against folly we have no defense. Neither protests nor force can touch it; reasoning is no use; facts that contradict personal prejudices can simply be disbelieved — indeed, the fool can counter by criticizing them, and if they are undeniable, they can just be pushed aside as trivial exceptions. So the fool, as distinct from the scoundrel, is completely self-satisfied, in fact, they can easily become dangerous, as it does not take much to make them aggressive. A fool must therefore be treated more cautiously than a scoundrel; we shall never again try to convince a fool by reason, for it is both useless and dangerous.

Bonhoeffer’s idea of “folly” didn’t refer to any intellectual or cognitive deficiency. Those he identified as fools were not people with low IQs. He was describing folly as he had witnessed it for the previous ten years in his native Germany — as a moral deficiency, which is to say a deliberate choice, one willingly made and then stubbornly repeated:

There are people who are mentally agile but foolish, and people who are mentally slow but very far from foolish. … We thus get the impression that folly is likely to be, not a congenital defect, but one that is acquired in certain circumstances where people make fools of themselves or allow others to make fools of them. We notice further that this defect is less common in the unsociable and solitary than in individuals or groups that are inclined or condemned to sociability. It seems, then, that folly is a sociological rather than a psychological problem, and that it is a special form of the operation of historical circumstances: on people, a psychological by-product of definite external factors.

… The fact that the fool is often stubborn must not mislead us into thinking that they are independent. One feels in fact, when talking to them, that one is dealing, not with the person themselves, but with slogans, catchwords, and the like, which have taken hold of them. They are under a spell, they are blinded, their very nature is being misused and exploited. Having thus become a passive instrument, the fool will be capable of any evil and at the same time incapable of seeing that it is evil. Here lies the danger of diabolical exploitation that can do irreparable damage to human beings.

This corresponds with what we looked at the other day from Bonhoeffer’s contemporary, Hannah Arendt (both were born in 1906 and raised in Germany). Arendt described the “mixture of gullibility and cynicism” that we see in a “mob mentality,” and see as an “everyday phenomenon” among the masses who have allowed themselves to be put under the spell of an authoritarian demagogue. “A mixture of gullibility and cynicism is prevalent in all ranks of totalitarian movements,” Arendt wrote, “and the higher the rank the more cynicism weighs down gullibility.” 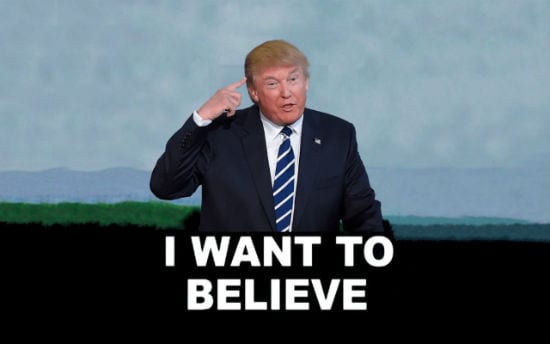 What both of these eyewitnesses to lethal folly are describing is what we’ve sometimes described here as weaponized bad faith — which has become the defining characteristic of conservative white politics and conservative white religion in America. Bad faith, like folly, leaves us with no defense. We cannot engage it honestly or rationally because there is nothing honest or rational there to be engaged. If we respond according to its own terms, we will ourselves become mired in it. If we refuse to respond to it, then the vicious fools will remain wise in their own eyes and will continue to do great evil while not quite being capable — due to a mixture of gullibility and cynicism — of recognizing that it is evil or of seeing the vast harm they’re inflicting on others and on themselves.

How then do we answer a fool? This is the trap that psychologist Chris Thurman cannot quite manage to avoid in his recent op-ed at the Christian Post website, “You foolish evangelicals, Trump has bewitched you.” Thurman’s essay is specifically addressed to four leading court evangelicals: Ralph Reed, Jerry Falwell Jr., Franklin Graham, and Mike Pence. Thurman mostly follows the counsel of the second proverb in Proverbs 26, answering these fools according to their folly. He speaks to them as fellow Christians earnestly devoted to their faith, as the good, reasonable, honest, decent men they all purport to be. And thus he attempts to engage them by stipulating the false premise of their pretense.

And it is pretense — a demonstrable lie. These men have achieved and inherited the highest ranks in their movement and, as Arendt noted, the highest ranks are always marked more by cynicism than by gullibility.

Whatever soul Ralph Reed had was sold long ago at a steep discount. This is a man who made his fortune in a long-running con that pitted white evangelicals against Native American tribes — fleecing money from both all the while. Reed narrowly escaped prison for his role in that crime, in part because Jack Abramoff and the others running the con were so creeped out by Reed’s malicious eagerness for their scheme that they didn’t quite grant him the full partnership in the conspiracy that he desperately wanted. On the gullibility-to-cynicism spectrum, Reed is about as close to pure cynicism as you’ll ever see.

Franklin Graham and Jerry Falwell Jr. are, likewise, far closer to the Reedy end of the spectrum than any of their more credulous followers. The rubes sending checks to Franklin or taking out loans to enrich Jerry’s correspondence-course empire might be described as cynically gullible, but the failsons running those money-making “ministries” are starkly cynical with just the slightest glaze of gullibility. (“Has Franklin Graham Gone Off the Rails?” Roger Olson asked in a recent post. But the question is based on the false assumption that Franklin Graham was ever on the rails.)

Mike Pence may be the clearest illustration of Arendt’s observation about cynicism weighing down gullibility as one rises through the ranks. Pence has never been very bright, and his public statements back when he was a congressman seemed like the recitation of a true believer — or of someone desperately trying to be a true believer — who was struggling to grasp what it was he was supposed to believe. But as Pence stumbled into ever greater power — first as governor, then as vice president — traces of that earlier true believer became harder to discern. The Mike Pence we see today is far removed from both truth and belief, a man willing to say flagrant and obvious lies in defense of his folly.

But of course, those four cynical fools aren’t really the primary audience for Thurman’s rant. He’s not mainly addressing the men he names, but is rather laying out a case against Trump — and thus also against them — for any wavering readers who might yet “have ears to hear.”

Given that Thurman’s article appears on the right-wing clickbait site Christian Post, it seems unlikely to find many such readers there. CP’s business model involves reinforcing folly, not challenging it. Stuff like Thurman’s essay isn’t provided as a counterpoint, but as fodder for hate-reading “engagement” from their usual umbrage-addicted audience.

“We may as well abandon all attempts to convince the fool,” Bonhoeffer said. They’re not open to convincing. Or, as he says, to “instruction.” But Bonhoeffer says this in the context of a more hopeful observation:

Folly can be overcome, not by instruction, but only by an act of liberation; and so we have come to terms with the fact that in the great majority of cases inward liberation must be preceded by outward liberation, and that until that has taken place, we may as well abandon all attempts to convince the fool.

He tells them, in other words, the very same lie they tell themselves, all day, every day, with some mixture of gullibility and cynicism. He repeats and reinforces the very same foolish, toxic lie that keeps them bound in their folly and ensures they will always vote for people like Donald Trump and Ralph Reed and Franklin Graham.