It’s the most wonderful time of the year

It’s still the Christmas season, liturgically anyway. Even non-liturgical “low” churches will remind us of that this Sunday when they take one more chance to sing carols instead of other hymns or praise choruses.

The commercial Christmas season is mostly over now. All the lights and other decorations have been marked down to make room for the next retail season. The unsold trees are headed for the chipper. But everybody’s still got their lights up, you might still hear that Mariah Carey song at the grocery store, Christmas movies are still streaming on Netflix. There’s still a bit of residual “Christmas spirit” in the air.

One of the clichés of this “holiday season” or the “Christmas season” is the wish that we could maintain our “Christmas spirit” all through the year. The idea was already quaintly old-fashioned when Perry Como sung about it in his schmaltzy 1946 song “That Christmas Feeling“:

For those who didn’t listen to that because you’re at work (or because it’s Perry Como), here are the lyrics to the chorus:

Christmas helps you to remember,
To do what other folks hold dear . . .
What a blessed place the world would be,
If we had the Christmas feelin’ all year!

Perry has a point there. For all the sugar-cookie sentiment, there is something to this idea of a “Christmas feeling” or “Christmas spirit.” Even the least sentimental among us understand and accept what someone means when they plead, “Come on, it’s Christmas.” That is expressed — and generally accepted — as a meaningful argument.

Whatever that means isn’t something we can quantify or precisely articulate, but we all seem to acknowledge that it intensifies whatever plea is being made. Whether the speaker is pleading to be spared something negative or to be granted something positive, we recognize “Come on, it’s Christmas” as a legitimate consideration that strengthens their case.

Consider this photograph taken inside one of America’s camps for migrant children separated from their parents. This picture was all over social media this week because it’s Christmas. 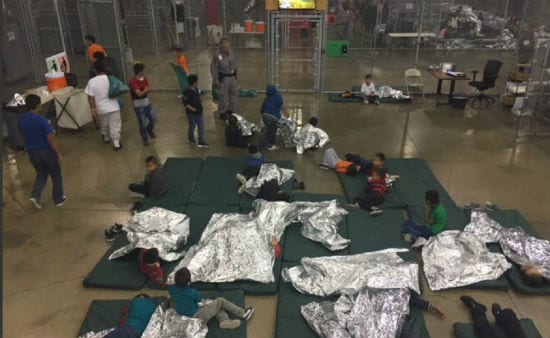 The cruelty and inhumanity of the conditions in which these children are being imprisoned is generally perceived as even more cruel and inhumane at this time of year. That doesn’t make it less horrible during the other 11 months, of course, but we see such ugly treatment of children now and some part of us thinks, “Come on, it’s Christmas.”

The first December I worked at the newspaper, a local family lost their home and all their possessions in a house fire just a few days before Christmas. I said something to one of the veteran copy desk editors about how awful it was for this to have happened to this family “at Christmas.” He explained that this was actually the best time for such an awful thing to happen. We would run a big front page story about this unfortunate family who lost everything they owned just before Christmas and our readers would respond with an outpouring of generosity and “Christmas spirit.” Area businesses would chime in to donate services and goods the displaced family would need. A local hotel would provide the family with a place to stay, free of charge.

All because come on, it’s Christmas. If the same family had suffered the same tragedy in June or October, the response from both the paper and the community would have been more muted — more of a trickle than an outpouring.

Witnessing the effects of such “Christmas spirit” can be encouraging. It can also be disheartening.

Seeing this “Christmas spirit” at work is encouraging because it demonstrates that we’re capable of it. It proves that generosity and sympathy and magnanimity and charity are possible as a way of being together in this world. It shows that we can, in fact, choose to be overwhelmingly kind and gracious to one another.

But it also demonstrates that we’re not able — or perhaps not willing — to sustain such grace and generosity. We can heed the better angels of our nature, but only once a year and only for a very brief period. We tend to spend the rest of the year refusing to be generous or merciful because, come on, it’s not Christmas.

I think that’s part of what makes all those “Christmas truce” stories from World War I so emotionally compelling. Look, there it is — peace and brotherhood and (literal) harmony! It’s beautiful. But then, the next day, it’s back to killing one another over a few yards of filthy no man’s land for reasons no one in the trenches can fully explain or understand.

I studied theology. That is usually thought of — as the presumptuous etymology of the word suggests — as the study of God and the study of the nature of God. But a great deal of theology, maybe even most of it, is more concerned with human nature than with the nature of the divine. What are we like, essentially? Are we basically good or basically rotten? What should we be like? What could we be like?

You can see the secular equivalent of this endless theological debate in response to pictures like the one above and in response to the policies that produced it, and to the impulses and motives that create such policies. Someone will see such a picture and say, “Come on, we’re better than this!” To which someone else will inevitably respond, “Are we though? Where’s the evidence for that claim?”

I think “Christmas helps us to remember” that both sides of that perennial argument have a point. We’re not always, or even usually, “better than this.” But sometimes we are, which suggests we could be. And the ferocity we all feel when engaged in such arguments further suggests, I think, that we all agree we should be.

I’ll spare you the long discussion of Augustine and Niebuhr and all the other dusty theologians who’ve debated all of this for centuries (because, come on, it’s Christmas).

What I think it boils down to is this: the better angels of our nature are real, but they need a lot of help. We can, sometimes, be “better than this.” But we have a hard time keeping that up for very long, even if all of us, on some level, wish we could. And so it’s always tempting to just give up. Maybe some few exceptional people might be able to sustain being better than this in the long term, but for most of us, most of the time, a few days or weeks of “that Christmas feeling” is all we can muster on our own.

So how do we get there? I don’t think we can do it on our own. We have to help each other. We have to make promises to each other to hold one another to it. That means having rules and laws and such to create incentives to stick to it. By doing that, I think, we might be able to be better than this. We might be able to reform ourselves and to reform our lives together in a way that would make our reformed selves something that could continue even when it’s not the holidays.

But I’m not arguing that moral progress is inevitable, only that it’s possible. And desirable. And worth the attempt.

Even if, in practice, what our best attempts at moral progress wind up looking like is something like this:

Anyway, I’m going to leave my lights up for a few more weeks at least.